Whatever It Means, Zoetic Stage Delivers Bravura Edition Of Harold Pinter’s The Caretaker 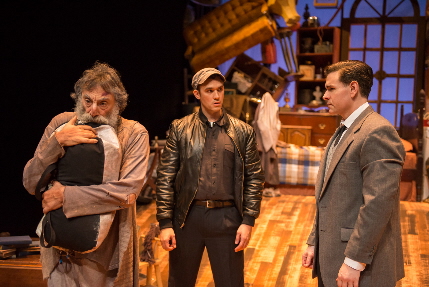 David Kwiat, Daniel Capote and Nicholas Richberg as the strange trio in Zoetic Stage’s The Caretaker / Photos by Justin Namon

In 1956, a New York critic came to the Coconut Grove Playhouse to review the first American production of Beckett’s Waiting for Godot. Legend has it that he wrote something like, “I have no idea what I just saw or what it meant, but it was undeniably great.”

Something similar can be said about Zoetic Stage’s brilliantly-executed bravura production of Harold Pinter’s 1960 The Caretaker. Every element of this comic drama is superb from acting that embraces Pinter’s notorious silences to the fluid staging to the evocative set design to the transcendent lighting.

But this is Pinterland, located somewhere between kitchen sink naturalism and surreal absurdism. Provoking thought, not clarity is his aim. There is scant plot or traditional character development so much as a struggle for control among personalities.

The themes of the fabled British playwright’s oeuvre are the subject of countless scholarly analyses. But they are notoriously difficult to suss out for mere mortals like the average theatergoer, even when they invest their attention and intelligence as they must here.

You can suggest that the play is about power, alliances, the strengths and weaknesses of family relationships, the difficulty of true communication among human beings, on and on. But actually, it borders on an infinitely interpretable Rorschach inkblot. Arguably, it doesn’t really mean anything any more than a non-representational installation at Art Basel. It just is. It’s theater.

Obviously, this will frustrate and even outright bore a large number of intelligent, discerning theatergoers accustomed to a traditional narrative and the didactic advocacy of clear cut themes. But if you can just sit back and enjoy the ride on its own merits, Zoetic and Pinter provide plenty to savor, especially in watching a corps of skilled artists maneuver through an ever-shifting Byzantine maze of who is dominating who.

Therefore, describing the plot may not sound intriguing. Set in a dilapidated attic of a west London home, the quiet reserved Aston (Nicholas Richberg) brings home Davies, a garrulous and scruffy homeless man (David Kwiat) whom he rescued from a fight in a tavern. Eventually, he offers Davies a job as caretaker of the building which has deteriorated so completely that the attic is only habitable room left.

An undisclosed tragedy haunts close-mouthed Aston’s every moment as he stutters or retreats into a corner to putter with studied intensity in repairing an electrical plug. Meanwhile the flamboyant Davies is by turns falsely obsequious and ebulliently outgoing. He fills the aural space with a torrent of words gushing out of an open fire hydrant.

The three joust in relationships that not only differ among each other, but that shift over the several weeks depicted in the play. Most notably, Davies becomes increasingly powerful as the brothers become dependent on him in undefinable ways.

Buried is likely some criticism of the British class system. Pinter used the same device in his 1963 screenplay for the film The Servant – the modest-seeming manipulative retainer becoming the dominant force in the household, only to return to subservience at the end. (J.M. Barrie of Peter Pan fame did the same in The Admirable Crichton in 1902.)

Each character gets multiple arias in which the nonsensical verbiage is not a tenth as important as the underlying emotions and intents. But the gold standard moment fusing acting, direction and lighting is Richberg’s long monologue at the end of the first act in which Aston finally reveals his secret – a scene unreeled slowly, haltingly and quietly with devastating effect. 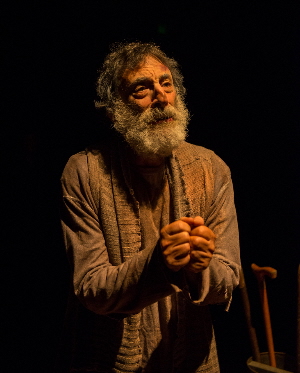 Kwiat once appeared regularly in South Florida including Carbonell-winning turns at GableStage. But as a professor at New World School of the Arts, he has scaled back his schedule to a handful of parts at Zoetic. This performance reminds you what we have missed. His body is rarely at rest, his arms and hands flail, his mobile face is always contorting, his eyes flit between wide-open amazement to squinty-eyed suspicion. There’s a moment constructed with Meltzer when Davies sits with legs crossed in a third-hand smoking jacket and pipe. Just through his relaxed body language you realize that the balance of power has shifted.

Richberg once again proves himself a deft actor willing to submerge himself deeply inside characters who seem like your next door neighbor but who turn out to be complex, as he did in The Great God Pan. For almost two-thirds of the play, we sense Aston’s lifeforce and affect are stunted by something. His carriage, speech pattern and whatever fuels an actor’s performance are all carefully calibrated.  (Of course, he can play the other end of the spectrum as he did as John Wilkes Booth in Assassins or Black Stache in Peter and the Starcatcher.)

Capote is a Miami native recently graduated from Julliard. He is just as good, but Pinter gives Mick less discernible motivation for his mercurial mood changes, so Capote has to work harder to succeed at making the morphing relationships completely credible.

Meltzer once again has fearlessly taken on a monster and came out the victor. He has melded staging, pacing and ensuring that if the audience does not know what’s going on, they can feel comfort that the captain of this ship knows exactly where he’s going. Notice the physicalization that he has encouraged in these performances such as Richberg’s cowed posture and Kwiat’s outsized gestures.

One of the most famous scenes has the three men battle for possession of a bag of clothes that Aston has brought Davies. Under the direction of Meltzer and the three actors, they silently snatch the bag from each other and toss it around like a weird game of medicine ball — a distillation of everything right about this production. Without a word being exchanged, the expressions and body language not only illustrate a competition for dominance, but more importantly it shows the strange unspoken relationships among the three men.

To attempt Pinter at all is a brave choice; the only companies we remember trying were The Promethean Theatre’s The Dumb Waiter in 2010 and Palm Beach Dramaworks’ Old Times in 2014. But Pinter is a favorite playwright of Meltzer who directed a more accessible Pinter title in 2015, Betrayal, also with Richberg. His leads his cast in mastering Pinter’s incomplete sentences and pregnant silences. As he proved in After earlier this year, he is master of staging to keep the visual aspect fluidly moving, but not in ways most people notice.

The most obvious asset is Michael McClain’s breath-taking recreation of a mad collection of ancient and useless detritus scrounged from a score of other people’s lives, now littering a deteriorating structure which, while inhabited, seems layered with the dust of dead end lives.

But it’s essential to stop dead right here and talk about lighting designer Rebecca Montero. Her work for Zoetic and Slow Burn Theatre Company has gifted some of the most skilled and effective light-paintings ever seen in this region. Most people will not notice what she does here throughout the evening, which is the mark of a great designer. But there are a dozen effects that she and Meltzer produce that should be recognized such as subtly washing the room during the second act in an increasingly deepening green cast that communicates moral rot. And in Aston’s end-of-act soliloquy, the audience will not notice until it’s inescapably obvious that she has been slowly dimming out the room until Aston remains in a strange bright light that leaves his face in a kind of bas-relief.

To repeat the warning, this decidedly is not everyone’s cup of tea even for an intelligent, cultured crowd. But it fearlessly expands the world of possibilities for Florida audience accustomed to mainstream theater.

The Caretaker from Zoetic Stage as part of the Theater Up Close series performs through April 16 in the Carnival Studio Theater at the Arsht Center’s Ziff Ballet Opera House, 1300 Biscayne Boulevard, Miami. Performances are at 7:30 p.m. Wednesday-Saturday, 4 p.m. Sunday. Tickets are $50-$55. Running time is 2 hours 15 minutes with one intermission after 85 minutes. (305) 949-6722 or www.arshtcenter.org. 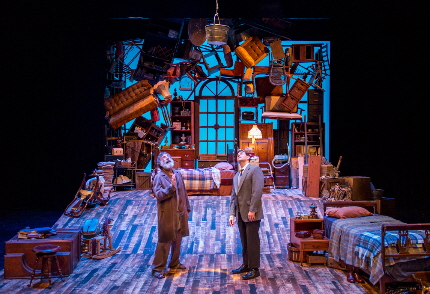