Wick Cinderella Is a 21st Century Reboot of the Classic 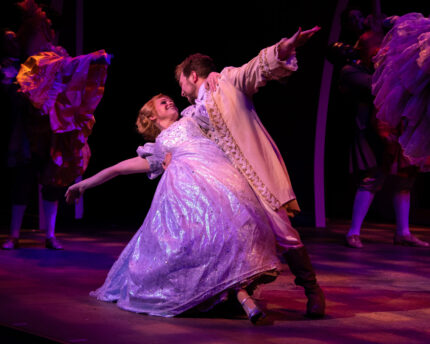 Charm bubbles throughout the Wick Theatre’s lush production of Rodgers and Hammerstein’s Cinderella, a very 21st Century riff on the classic musical that can legitimately be promoted as entertaining for the whole family – adults and children.

The evening is awash in gorgeous melodies delivered by an earnest cast blessed with sumptuous voices. The sparkling gowns, doublets and wigs are breathtaking as you would expect for a company whose other business is renting theater costumes nationwide.

Now, be advised, the licensing-required title Rodgers and Hammerstein’s Cinderella is misleading, to be diplomatic about it. Their original beloved score is here, beautifully enhanced with new orchestrations, plus songs the duo wrote for other projects that have been inserted.

But don’t go expecting Hammerstein’s fairy tale script that you may have seen with Julie Andrews or Lesley Ann Warren on television in the 1950s and 1960s.

Producers in 2013 hired Douglas Carter Beane, the witty playwright of the sardonic comedies As Bees In Honey Drown and The Little Dog Laughed, as well as the tongue-in-cheek scripts for the musicals Sister Act and Xanadu.

So while this Cinderella is still set in a fairy tale kingdom and the basic French story is discernable, Cindy has a buddy Jean-Michel who is a revolutionary wanting land reform. The young Prince is naïve and being manipulated by his bureaucratic handlers. One of Cindy’s stepsisters turns out not to be so nasty; she helps Cindy’s quest and she wants to run away with Jean-Michel. There are plenty of plot twists you don’t necessarily anticipate if you have seen the earlier edition of the show.

And the controlling themes are not very subtle reiterations of contemporary tropes common to modern Disney princess films: self-actualization, self-discovery and finding your self-worth.

Relax: This is done with considerable wry humor and the underlying romance remains intact.

And no matter — whether you sync with Beane’s changes or not (and they are laudably inventive), that lovely score remains with such deathless classics as “Impossible,” “Ten Minutes Ago,” “Do I Love You Because You’re Beautiful” and the wonderfully wicked “Stepsister’s Lament” (note the singular stepsister in the title since the other once has turned out to be an ally).

The project is led by Wick regular Norb Joerder, who has accumulated an encyclopedia of theater craft after helming seemingly every major American musical of the past few decades. Musical director Bobby Peaco has helped the cast make the most of the digitized score.

The two have cast a solid corps of performers who immerse themselves in Beane’s half-romantic, half-comic vibe. 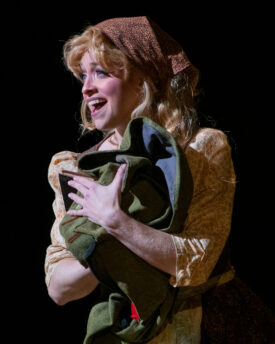 Top of the list is Mallory Newbrough, who won a Carbonell Award on this stage as Janis Joplin in the rock revue, Beehive, but who has been the girlfriend in Equus, the mother in Matilda, Belle in Beauty and the Beast and a dozen other memorable performances.

Her Cinderella irradiates winsome loveliness, not just of physical beauty but of inner character. Under her patient fortitude dealing with her stepfamily’s meanness, she projects a bit of sadness at the loss of her father and an earlier life. You buy that she can talk to woodland creatures, but also that she wants to help the people of the kingdom achieve social justice by speaking their cause to the Prince.

The rest of the cast is equally memorable. Start with Aaron Bower imbuing the fairy godmother with grace, compassion, a sense of humor, positivity and a voice that echoes silver flowing like mercury.

Then there’s Angie Radosh, who in addition to having a fine singing voice, deftly nails every comic moment as the nasty ol’ stepmother. Elliot Mahon makes a fine Prince still learning how to be a compassionate leader. Charles Baran is a corrupt advisor. Britte Steele is comical as the man-hungry stepsister. Whitney Grace is the more likable and slightly woebegone stepsister. Alexander Blanco is the revolutionary, outspoken yet tentative.

The quality of the casting extends down to Michael Scott Ross in the tertiary role as a noble courtier, but who sings his role with as much gusto as if he was the lead.

Other than the pre-recorded music, little expense has been spared — from 24 people in the cast to Travis Grant’s costume design to Sean McClelland’s fairy tale world of ballrooms and country houses, with considerable projections from Josieu T. Jean, and lighting by Kirk Bookman. Choreographer Oren Korenblum puts the ensemble into the winning moves of swirls and lifts.

Would Oscar and Dick approve of the overhaul? Presumably their widows did through their licensing company. But it’s a good guess that they would have been pleased. 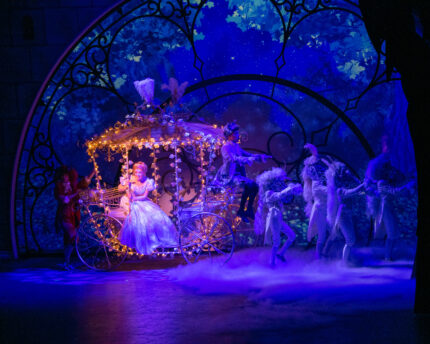