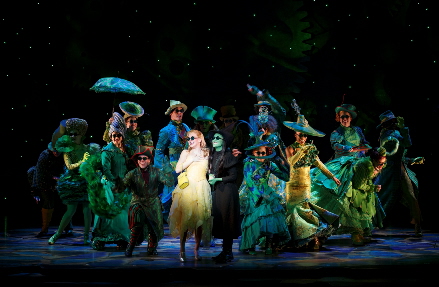 After all, it’s easy for long-time theatergoers to become a bit jaded about seeing the umpteenth tour of a musical that you think you’ve seen too many times already to appreciate it anymore.

But any qualms about Wicked, now at the Broward Center through March 4, are quickly dissipated when Glinda, all ruffles and curls, gracefully glides down in her bubble to tell the townspeople that not only is the “Wicked” Witch of the West dead, but she is truly and completely dead.

This is Wicked’s eighth go-round in South Florida, but this production seems as fresh and magical as the first time it played on Broadway more than 15 years ago. (The Broadway production recently completed its 5,960th performance, becoming Broadway’s seventh longest running production.)

The Broward Center production clicks all the right buttons—rousing production values, terrific lead performances by Ginna Claire Mason as Glinda, Mary Kate Morrissey as Elphaba and Michael Campayno as Fiyero and a tight supporting cast with Judy Kaye, a long-time personal favorite, as Madame Morrible, Robin De Jesus as Boq and Tom McGowan as The Wonderful Wizard of Oz.

Plus, there are those timeless themes of the power of friendship, loyalty, the inner strength of girls who become women, dealing with being an outsider, rising above bigotry and learning who you are and your place in the world. Heady themes indeed for a musical but so well woven into the action that they feel natural, never didactic, as well as being needed more than ever.

For those few unfamiliar with Wicked—many of whom may not have been born when the musical debuted—it’s an imagining of what might have happened long before Dorothy and Toto arrived in Oz. Wicked bills itself as “the untold true story of the Witches of Oz.”

Those witches are the uber-green Elphaba—who becomes the “Wicked” Witch of the West—and the uber-blonde Glinda—who will eventually be known as the Good Witch.

But before that notoriety, they were just two college kids who met at Shiz University, as “Wicked” shows in flashbacks. Elphaba and Glinda are opposites and hate each other immediately. Elphaba grew up an outcast in her own family, rejected by her father, the governor of Munchkinland. Used to being friendless and ignored has made the green girl a seeker of justice and truth. The perky, shallow Glinda is used to be the most popular girl in the room, always getting her way and any boy she wants. There’s also a bit of rivalry as Glinda resents that Elphaba is clearly the more talented in sorcery. But their relationship takes a turn when Glinda regrets an act meant to humiliate Elphaba. From this discourse, unbreakable bonds develop between the two, even when Elphaba is falsely accused of being wicked.
OK, there is more to plot but that’s enough backstory.

Both Mason and Morrissey embrace the roles with energy and depth. Both clearly are comfortable with their characters, each having been understudy to their respective roles. Although Mason’s voice is a bit thin at first, she nails Glinda’s quirkiness and excels at her solos such as “Popular” and the reprise of “I’m Not that Girl.”  Morrissey’s “I’m Not that Girl,”   “No Good Deed” and, of course, the first act ender “Defying Gravity,” which truly does. Their duet “For Good” is straight from the heart.

Campayno shines as the bad-boy prince Fiyero who discovers he’s not as shallow as he thought. De Jesus has nice turns as the put upon Munchkin. And Kaye, whose audio recordings of Sue Grafton’s novels are pitch perfect, is a terrific headmistress. (Kaye is in the role through Feb. 25 when Jody Gelb takes over.) McGowan embellishes what’s behind that Wizard of Oz’s curtain, or in this case, mask.

That Wicked ever made to the stage and proved its staying power is a minor miracle. It is based on a near unreadable novel by Gregory Maguire. But was redeemed by a score by Stephen Schwartz (Godspell, Pippin), book by Winnie Holzman, and direction by Joe Mantello. The musical staging is by Wayne Cilento with Susan Hilferty’s costumes, Eugene Lee’s sets and Kenneth Posner’s lighting.

Wicked still has the magic touch with all ages. Just ask my 13-year-old goddaughter for whom Wicked was her first Broadway-style musical, but won’t be her last. She’s a Wicked fan now, as is her brother.

Wicked runs through March 4 at the Broward Center for the Performing Arts, 201 SW Fifth Avenue, Fort Lauderdale, as part of the Broadway Across America series. Performances are 8 p.m. Tuesdays through Saturdays; 2 p.m. Saturdays; 1 p.m. and 6:30 p.m. Sundays. Runs 2 ¾ hours including one intermission. Tickets start at $44.25. For tickets visit www.browardcenter.org; by phone 954-462-0222. A limited number of $25 orchestra seats are set aside for each performance. A lottery will be held at Broward Center Peck Courtyard 2 1/2 hours prior to each performance, names will be collected. Limit of 2 tickets per person, cash only. Two hours prior to each performance, names will be drawn. Winners must be present (with valid photo ID) when their names are called, or they forfeit their tickets.

This entry was posted in Performances, Reviews and tagged Broadway Across America, Broward Center, Wicked. Bookmark the permalink.