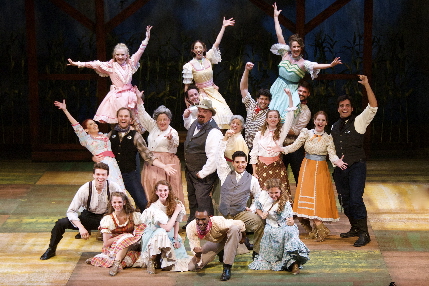 In recent years, Rodgers and Hammerstein’s 1943 Oklahoma! has been mined for deeper meaning and given some revisionist twists: some had a black Laurey or Jud, several have underscored psychological, even sociological underpinnings.

The Wick Theatre’s production is not one of those – and it doesn’t want to or try to be. This is an apple cheek fairy tale drawn in only two dimensions, a broad musical comedy (with an accent on the comedy) sprightly painted with bright vibrant colors that will not fail to entertain if you let it.

Not only will this decidedly mainstream production not annoy most pre-Sondheim patrons, they will embrace it with a joyous “this is what we want to see” reaction. From the clarion singers to the prancing dancers to the vaudeville comedians, everyone from the stars to the ensemble invest every ounce of exuberance they possess, exemplified by their delivery of the powerful rousing title number.

Still, there’s something naggingly unsatisfying for patrons seeking a bit more of the heft that all R&H work contains. Emblematic of this escapist tone is that all these hard-working cowboys after a tough day on the range wear fresh-out-of-the-box K-Mart bluejeans still with the Wrangler tag on the backside. Will Parker wears fake wine-colored chaps on loan from one of the Village People.

Director/choreographer Norb Joerder, who helmed last season’s fine 42nd Street, is experienced in mounting classic musicals the way his audiences want to see them. His staging is seamless, he has a flair for enlivening scenes with copious bits of comedy and he’s especially effective in creating musical dance numbers such as “Kansas City” and “The Farmer and the Cowman.” Reportedly, this show had limited rehearsal opportunities since many cast members were appearing in The Wick’s last tenant, Man of La Mancha, but his leadership has resulted in a polished production. 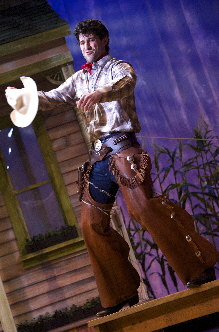 Ian Parmenter has a fine strong singing voice and an amiable personality as Curly. If he looks and acts more like a lanky Andy Samberg than a macho Gordon MacRae, that’s a perfectly defensible choice. His slight gawkiness makes Curly even more likable as he suffers more trouble corralling a beautiful young woman than he would roping a steer.

As Laurey, Lindsey Bliven gifts the audience with a creamy, clear Broadway soprano as lovely as her corn-fed down-home beauty. She also convincingly embraces the pouty coquettishness that seemed perfectly acceptable to mainstream sensibilities in 1943. Together, the pair have a reasonably adequate chemistry as they spar and spark, although they don’t exactly catch fire in each other’s arms.

But Leah Sessa is a conflagration all by herself. She must be exhausted each night after giving an unfettered all-out comic turn as the man-hungry Ado Annie of the easily swayed affections. Between her natural talent and Joerder’s considerable bag of tricks, Sessa’s Ado Annie is downright adorable.

Alex Jorth, who shone in The Wick’s tap-dancing blockbuster 42nd Street, imbues Will Parker’s dance numbers with an easy-going affability that wins over the audience.

The supporting cast includes Missy McArdle as the sage and sassy Aunt Eller, James Young as the Middle Eastern immigrant peddler Ali Hakim who sounds like he’s from the Middle Eastern Catskills, and Troy Stanley as every suitor’s nightmare of a father with a shotgun. As usual, The Wick has cast a sharp and enthusiastic ensemble of singer/dancers. 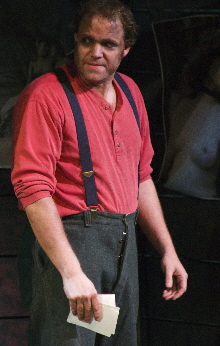 Saving the best for last, the most outstanding aspect of the entire production is the performance of Shane Tanner as the begrimed Jud. Normally, it’s not a good thing to say that he’s playing in a different show than everyone else, but in this case, we’re grateful because he’s the only three-dimensional performance on the stage. Just as Hammerstein intended, Tanner’s Jud has emotional and psychological complexity encompassing comic relief to surprising melancholy to a brief glimpse of chilling menace – plus his rich baritone is one of the best voices in the cast.

Tanner, who was nominated last month for a Carbonell as the brother of the title character in The Trouble With Doug, has been a mainstay of local theater for years as a supporting player. Although he had the lead role in Broward Stage Door’s Mack and Mabel, he’s rarely been given the extended parts he earned long ago. His work here made us yearn to see him in a musical theater lead worthy of his talents. Imagine him and his real-life wife, the incomparable Amy Tanner, as Billy Bigelow and Julie Jordan in Carousel. (In fact, they will star in Slow Burn Theatre Company’s Big Fish next season). 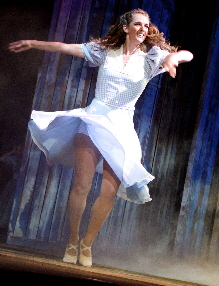 Another highlight was the 15-minute dream ballet that Joerder choreographed based on Agnes de Mille’s original work. Depicting Laurey wrestling with her dilemma while asleep, the ballet involves the entire ensemble but features a fine Tommy Joscelyn as the Dream Curley and the always wonderful Lindsay Bell as the Dream Laurey. Bell’s assured fluid grace and her acting while she is dancing here, in the recent Swing and other shows makes her stand out even in a chorus line.

Ryan Howell’s stylized set designs adequately evoke the plains. Brittany Merenda’s vibrant projections, used for the first time by The Wick, are splayed on a show curtain. During Oklahoma’s original production, many scenes were played in front of a curtain to enable stagehands to switch scenery behind it; so her projections provided a welcome visual change during these interludes.

The music is canned once again, like the previous Man of La Mancha, although again the tracks feel bright and full thanks to nips and tucks from musical director Michael Ursua. Managing Executive Producer Marilynn Wick, who has caught some flak for dispensing with contracted musicians for the past two shows, said The Wick will return to using a live band with the next production, Dames At Sea.

Some context: Contrary to what they teach you in survey courses, Oklahoma! was not the first musical comedy, not the first to incorporate dance, not the first to integrate story and score. Those credits have been variously assigned – also debatably — to such shows as the ancient Black Crook, George M. Cohan’s frothy tuners, and Jerome Kern and Hammerstein’s Showboat.

But Oklahoma!, welcomed during the depths of World War II, was such a deft and sophisticated synthesis of all that had come before that it seemed ground-breaking —much like Stephen Sondheim’s Company was not so much radical as much as an expertly woven use of past techniques, and in the synthesis, created a clearly-recognizable watershed.

Oklahoma! marked the first collaboration of two successful Broadway vets seeking new partners. Notable aspects included ballet choreographer de Mille in her first Broadway assignment creating that “hifalutin’’ ballet. The entire show opened without a big production number featuring showgirls, but a woman alone churning butter and a man offstage beginning his opening solo before walking on. Apocryphally, veteran producer Mike Todd walked out after the first act during the New Haven tryout and cabled a friend, “No legs, no jokes, no chance.”

One Response to Wick’s O-o-o-o-o-klahoma! Is Tuneful Mainstream Fairy Tale