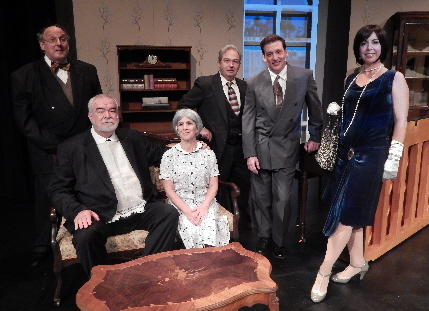 Perhaps a historical nod as to the roots of The Jazz Singer would have created a more interesting slice-of-time perspective for The Jazz Singer: The Musical. As of now, the show never really takes its audience back in time, but has a false feeling that we’re watching actors put on a play.

But there are reasons this production at the Willow Theatre is an audience crowd pleaser: audience sing-a-longs of timeless standards and talented actors who give it their all.

The Jazz Singer is one of those iconic stories, mostly because it was the precursor to the famous 1927 Al Jolson movie of the same name, which ushered in the era of “talkies” from silent films.

There are so many layers in addition to its most technical, historical status. The play, The Jazz Singer, written in 1925 by Samson Ralphaelson, was inspired by Jolson whose star power in the early 20th century was rock star status. Ralphaelson had written a short story in 1922 after seeing Jolson perform, called A Day of Atonement. It was based loosely on Jolson’s life as a young Jewish man who became a popular singer, although depending on who you listen to, the author denied the comparison.

I spend time on this background because it goes virtually unnoticed in the current production of The Jazz Singer: The Musical now on stage at Willow Theatre at Sugar Sand Park. Produced by Jerry Seltzer and Hy Juter and directed by Kevin Black, the show is enjoyable enough. Sunday’s sold-out audience loved the chirpy and zippy production — a Jewish story about a cantor’s son who ditches the synagogue for a chance at The Great White Way.

Costumes and sets by Carousel Theatrical received a few oohs and aahs, especially a sparkly flapper dress that Katie Angell Thomas revealed as she dropped a luscious fur coat to the floor.

There’s a talented cast who tries to rise above the “let’s put on a show” atmosphere that seems to override most everything else.

Lawrence Buzzeo as the jazz singer is earnest and brings the audience along for Jake’s ride as he swoops through toe tappers of the American standard repertoire: Jolson’s “Toot Tootsie,” and “Liza (All the Clouds’ll Roll Away),” Benny Davis and Harry Akst’s “Baby Face” and Irving Berlin’s “Blue Skies,” plus memorable ballads like George Gershwin’s “Someone to Watch Over Me,” and of course, Jolson’s famous rendition of “Mammy.” His character Jake is the ultimate showman. He’s imbued the jazz singer with a bit of the Rat Pack. Wrong era, but delightful to watch.

Larry Kent Bramble as the stern Orthodox Jew, Cantor Rabinowitz, and Jake’s “Papa,” has such a presence on stage, you never want him to leave. Bramble’s Papa is infinitely complex, an immigrant father trying to make sense of a son who is moving away from tradition. “You sing to please God,” says Rabinowitz, “but YOU sing to please yourself,” he tells his son. It’s the actor’s multi-faceted portrayal that really drives home the drama in this Jazz Singer, where the clash between Old World values and New World desire create a volcanic eruption of family conflict.

Director Black states in a press release that he made a conscious choice to “remove the image of Al Jolson from his mind,” yet in doing that he’s left with a script filled with era-specific schmaltz whose characters can’t avoid stereotypes. Elissa D. Solomon does her best with the white-bun wigged Mama – a Jewish Bubby type who is caught between being a dutiful wife and the allegiance to her only son.

Bob Levitt gets the laughs as family friend, kibitzer Yudelson. Here’s a missed opportunity. What I was looking for in the character of Yudelson was perhaps a riff on the kibitzer that’s ever present in Yiddish theater, which would have taken this character to a historical, campy height. As a mere mortal, he’s just a plain stereotype. Just a thought.

Angell Thomas’s leading lady Mary is so thinly drawn (not so much the actress’s fault, but the liability of the time-stuck script) that the best moments are when she’s purposely overacting in a hokey musical inside-the-musical, “April Showers.”

There are highlights including Floyd Nash as Broadway producer Larry singing a rousing rendition of “Baby Face,” a touching father-son moment between Jake and Papa when they bond during the tearjerker “Sonny Boy”, and a sing-along curtain call with the cast.

I respect the director’s decision to not make this a tribute to Jolson. It’s also how Richard Sabellico, who reimagined Samuelson’s The Jazz Singer as a musical play for the stage in 1999 for New York’s Jewish Repertory, saw it.

Pre-fabricated music also serves to detract from the professionalism of the production. The sound levels will hopefully be fixed as the run of the show continues. Many times the music was louder than the vocals during songs, which created imbalance.

If you don’t know beans about Al Jolson or the history of The Jazz Singer, you’ll love this musical.