Words Are The Heroines In Thinking Cap’s Vita And Virginia 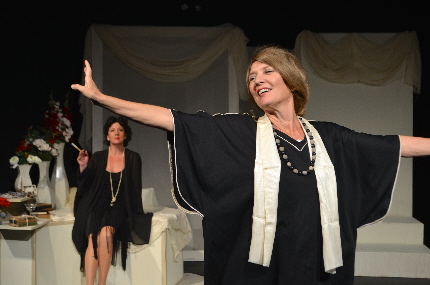 In theory, Eileen Atkins’ play Vita and Virginia details the relationship between Bloomsbury icon Virginia Woolf and writer Vita Sackville-West. But the real romance is a profligate, glorious love affair with words, with language, with literate expression.

Atkins, one of Britain’s great actresses and co-creator of Upstairs Downstairs, constructed this 1992 play mostly from the women’s lengthy correspondence, although it’s a theatrical piece with little evidence of a cut-and-paste process.

The letters are deftly woven to seem like conversation. One triumph is how Stodard, Fridh and Sloan make much of the play seem like people chatting over tea and scones in the conservatory.

Both the glory and the one unavoidable flaw is that much of the letters’ content, especially in the first act, is small talk and social gossip. It’s the vibrancy of the language and the emotions stirring just under the surface that give them worth.

So, people with little patience are going to tumble early on that little actually happens in the play and there is little in the way of a compelling dramatic arc other than the chronology of two women falling in love. Even I wanted about ten minutes less talk about flower-planting and the like. But fortunately, these two actresses see what Atkins saw and plug in the burgeoning passion.

For those who skipped that day in English Lit, Woolf was a novelist and poet between the two World Wars, who wrote the ground-breaking novels Mrs. Dalloway, To The Lighthouse and Orlando, a surreal thinly-disguised paean to Sackville-West. The latter was a globetrotter with her diplomat husband, who cut a swath through English society developing her own reputation as a writer and world-class designer of gardens.

While both were married, they developed a deep love that reportedly was physically consummated at least twice but which was more a melding of kindred souls. Vita, the more adventurous of the two, was desperately needed rainwater allowing the psychologically conflicted Virginia to blossom into an independent and fully-realized spirit.

Vita and Virginia works today not only as a rebuke against 140-character tweets but even hastily penned e-mails. This was an age when people wrote profusely and frequently. In this case, their verbiage had a polish that makes you wonder if they rewrote their missives before sending or whether they were just that good. What makes this language special is almost impossible to analyze, but the actresses deliver these words with a smooth unselfconscious pleasure.

Crucially, the actresses exude a chemical bond, aided by Stodard’s adroit and surprisingly mobile staging that makes it clear that while the two were physically separated most of the time, they were spiritually in the same room looking into each other’s eyes, physically touching.

Once again, Sloan’s performance simply creates frustration that she works on stage too intermittently and sometimes in shows not worthy of her. Her Virginia may be the smartest person in the room, but she is tentatively finding her way through a restrictive sexist society with Vita’s inspiration and encouragement. Sloan invests Virginia with a quiet elegance and a fierce intelligence striving for the sunlight.

Stodard’s love for literature has been reflected before, such as in Thinking Cap’s The Rover, a 17th Century comedy by pioneering female playwright Aphra Behn. Her skill with literary-based material is clear in everything from the pacing to the note perfect period costumes with Casey Dressler.

As she writes in the director’s notes, the script is pretty simple, so her three-dimensional vision — encompassing Calypso Hernandez’s fluid lighting and David Hart’s atmospheric sound — amps up the visceral feel that real life is being lived by real people before you.

The play is staged at Thinking Cap’s new digs in downtown Fort Lauderdale, The Vanguard, also founded by Stodard as a venue available for any interested troupes. Stodard, who has a decided interest in off-beat projects, opened the renovated church property last month with the wonderful but more mainstream Always… Patsy Cline. The original opening show, the edgier Waiting For Waiting For Godot, had to be postponed, probably helping get audiences in for the first time. But the first two shows share a polish and verve that is quite promising.

Vita and Virginia runs through May 3 from Thinking Cap Theatre performing at The Vanguard Sanctuary for the Arts, 1501 S. Andrews, Fort Lauderdale, on the west side of the street across from Broward Health Center. Performances 8 p.m. Wednesday the 25th and Thursday-Saturday, 5 p.m. Sunday. Runs about 2 hours 10 minutes with one intermission. Tickets $35. Visit www.vanguardarts.org , http://thinkingcaptheatre.com or by phone at 813-220-1546.