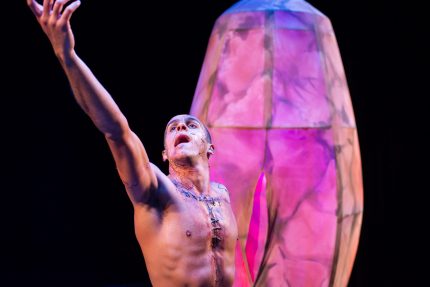 The “horror” in Zoetic Stage’s Frankenstein shares little kinship with the 1931 film’s monster with bolts in his neck terrorizing the countryside or even the 1818 novel of science gone wrong. But a different very contemporary terror is there all the same.

From the breath-taking wordless prologue of a stitched together embryo clawing out of a Body Snatchers-like pod to the silent final image of two bodies crawling through Arctic waste, you realize that the horror here is watching a pure soul infected and destroyed by its interaction with “civilized” Mankind.

Indeed, this Frankenstein is seen through the bulging panicked eyes of the never-named Creature who is preternaturally imbued with the ability to mimic what he sees and hears, then learns the language and the ways of his species. If there is a twisted tormented monster here, it is his titular creator.

Nick Dear’s 2011 play is jammed with contemplations of the war between innate good and evil in human beings, a desire to bestow life and cheat death in an attempt to equal God, the desire of someone “different” yearning to belong, the true nature of love, scientists’ responsibility for the fallout of their work, and a half-dozen equally thorny issues of morality and civilization.

There are, of course, the requisite murders, fog-shrouded expanses and a few terrified peasants in this moody environment. But Zoetic’s visually memorable and emotionally pungent production led by director Stuart Meltzer prefers exploring philosophical terrors.

And while every aspect of this production is equal to Zoetic’s usual high standards, the headline has to be the benchmark performance of Gabriell Salgado molded by Meltzer.

Salgado, amazingly a New World grad in his first professional production, delivers what is the most stunning physical performance in a play seen in this region in years. Salgado breathes life into a full-grown form with an infant’s innocence. We see him joyfully discovering the sound of a bird for the first time or the new-found pleasure of drinking rain as it falls.

After crawling out the pod womb like a baby we see in zoo videos, he slowly discovers with equal measures pain and amazement how each joint in his body is moveable. His form twists spasmodically in ways you might not have thought possible, his rib cage sticking out in painful silhouette. His mouth often forms a slack-jawed O with the tongue darting uncontrollably. And as the story continues, Salgado’s Creature gains more control over his body – although not quite completely.

This choreographic marvel was the joint creation of Salgado and Meltzer in extended one-on-one rehearsals.

Vocally, he starts with only guttural groans emanating deep in his diaphragm, but as he learns to speak, it becomes a pained high-pitched hollow sound akin to John Hurt’s Elephant Man.

But Salgado’s equally memorable success, again with the aid of Meltzer, is the daunting achievement of believably charting the Creature’s evolution from a grunting hulk of elemental flesh to someone who, over three years, learns to reason and debate while quoting passages from Milton’s Paradise Lost.

Not only does the Creature’s physical movement evolve, but so does his character from that of an easily-wounded, even terrified innocent to someone whose mistreatment eventually teaches him to emulate the darker side of human beings. Salgado, Meltzer and Dear are depicting an inescapable tragedy.

Daniel Capote, who played Mick in Zoetic’s The Caretaker, has the less showy role of the famed doctor, but he invests him with impatient fury of a man who has willingly jettisoned any connection with the rest of humanity. His Frankenstein is driven past caring for his fiancée or any other human being in his obsession with creating life. When in the throes of anger, his hands seemingly vibrate. From the doctor’s second appearance, deep, deep into the play’s running time — a year after the Creature’s birth and disappearance — we see a man haunted by what he has done, but with no regrets.

Dear’s play bowed in an acclaimed 2011 production at Britain’s National Theatre with Benedict Cumberbatch and Jonny Lee Miller alternating the lead roles. But Meltzer refused to look at it when it was live-streamed so that he could bring his own vision to it unencumbered.

What Dear’s script doesn’t quite land is the finale in which he seems to want to say that the two men are halves of a whole. But while the corrupted Creature is eventually contaminated to the point of inflicting self-generated violence, the doctor hasn’t seemed to have learned anything.

As with Zoetic’s The Wolves, the stage crosses the entire space of the theater with the audience arrayed in bleachers on either side. Every seat is close enough to see the angst-ridden faces, but it’s a large expanse of space to cover. So Meltzer, whose staging is as invisible as his direction of performances, has his kinetic cast running up and down, circling each other around the broad area.

Most directors provide a unifying vision for all aspects of a production as well as, in Meltzer’s case, being collaborative with an array of inventive designers. So credit is likely due a community of talents.

Here, the floor of the stage is crisscrossed with vein-like tendrils and evocative sparely-executed roll-on scenery by Natalie Tavares and Jodi Dellaventura (although the pod looks like something made in a high school art class).  Rebecca Montero adds to her bragging rights with the mood-setting lighting design including multi-colored illumination rising from grates in the stage. Matt Corey – one of the most honored sound designers in the region – suffuses the environment with a sometimes thundering, sometimes pulsing, often ominously eerie underscoring. The ragged clothes for one class and Regency finery for the other are Marina Pareja’s design.

The Creature’s appearance is as striking as the physical movement. Kelly Flores and Pareja have developed over time a unique makeup design to cover Salgados’ tall lean body with scars, grime and three-dimensional stitching, including what appears to be stitches along the backbone that are wrenching apart – nothing resembling previous images you have of the Creature.

Covid protocol: Masks required in the lobby and auditorium. Proof of vaccination or recent testing must be shown at the door along with ID before security wanding. The totally non-paper ticketing means that tickets are sent by email or text to your phone (even if you get them from the box office) and that electronic ticket is what must be shown to the ticket scanners at the door; they cannot scan a paper printout. Food and drinks are available just outside the doors of the theater. In a well-meant but clumsy move, not only are there no paper playbills, but the program can only be accessed on your phone using a QR reader app, assuming you have a phone and a QR reader app – and they are hard to read on a phone to begin with.