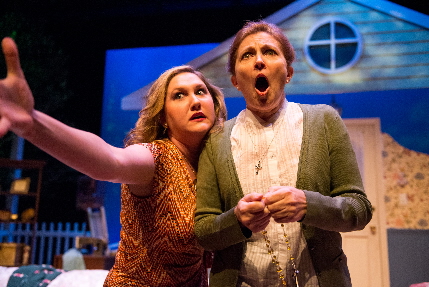 “Act as if ye had faith and faith shall be given ye” goes the maxim and the performers in Zoetic Stage’s production of The Savannah Disputation seem to have taken it as their watchword. They and director Stuart Meltzer have invested every bit of their considerable talent making a flawed, one-and-a-half-dimensional script into a terribly funny and mildly thought-provoking evening about religious certitude.

Melissa, an indefatigably chirpy proselytizer ringing the doorbell at the home of sisters Mary and Margaret, is invading the space of the devout Catholics who live there, but Melissa’s message will also invade their peace of mind as well. Evan Smith’s 2007 play spends its first half as a wicked if cartoonish lampoon of zealots so certain of their vision, but ends with a sober contemplation of faith.

That Zoetic succeeds in producing an entertaining evening doesn’t paper over the fact that the script becomes intellectually fuzzy and slowly disintegrates over the last third of the show, ironic since Smith attempts to delve more deeply into issues. Credit the first-rate cast and Meltzer for nimbly and persuasively negotiating Smith’s wild tonal changes from farce to domestic strife to pathos and back again that would otherwise seem like at least two if not three different plays.

Still, for anyone of any religious conviction, or lack of it, who has felt insulted by the pounding ministrations of evangelicals, Savannah is a vicarious hoot.

Melissa (Lindsey Forgey) is an irrepressibly upbeat young door-to-door purveyor for some splinter fundamentalist church. She rings the doorbell of a lovely middle-class home on the outskirts of Savannah. When the crusty curmudgeon Mary (Barbara Bradshaw) opens the door, Melissa’s first words are a cheery, “Good morning, are you saved?” To which Mary answers by slamming the door. Melissa just manages to get out, “Jesus loves you,” to which Mary fires back, “I know Jesus loves me; it’s you he hates,” sounding like Elaine Stritch or Bette Davis.

But Melissa returns later to find the younger sister, Margaret (Laura Turnbull) home alone. Margaret, a lonely old maid too timid and too polite to give Melissa the bum’s rush, lets Melissa into the home. And that’s more than enough to start Melissa on her spiel.

She pours out dogma like a velvet steamroller, dancing on the edge of obnoxious. But not quite. What Smith, Forgey and Meltzer have created is someone who may be seeking validation by imposing her view on others, but who exudes a whiff of altruism that  lets you forgive her — right up to the inevitable point that she crosses over the line. Because when Melissa finds out Margaret and Mary are church-going Catholics, she launches into a series of blithely uttered proclamations that start with her sect being the only true way to find salvation, ramping up to baldly stating that Catholics are going to hell – said, of course, with sympathetic pity.

When Melissa tells Mary that Mary believes in something horrible like torture, Mary says, “That’s not what I believe!” To which Melissa answers with that same you-want-to-slap-her-face forgiveness, “I’m afraid it is.”

Her bigoted certitude and inability to cognizance the effect such statements have is the nut of the humor that dominates for an hour when Mary comes home and becomes enraged by Melissa’s pronouncements. Mary, who is equally unbending about Catholicism being “the one true church,” is especially furious because Melissa’s questioning has undermined Margaret’s faith, already being tested as she awaits the word whether she has terminal cancer.

Mary is like a perpetually angry bull who has had a red flag waved in her face and she tosses Melissa out of the house. But she then has an idea: Make Margaret invite Melissa back when their friend, the wise and warm Father Murphy (John Felix) comes over for his weekly dinner. He’ll fix her. Obviously, this doesn’t go quite as planned. In fact, both sisters have a crisis of faith that turns the play into something quite different than it started.

The headline here should be Forgey. It’s been a pleasure to watch her develop from promising roles at Slow Burn Theatre Company to her central role as the emerging lesbian in Kim Ehly’s Baby GirL, to her housewife escaping an abusive husband in Arts Garage’s Exit, Pursued By A Bear, and now this fresh-face, well-scrubbed monster who could make you cookies before she burned you at the stake.

Many of her characterizations are similar – a slightly daffy, not terribly sophisticated, but undeniably earnest young woman. But within what she is being cast in, she is honing her comic timing to a keen edge. Further, Forgey somehow manages to keep Melissa from being completely obnoxious despite her genial arrogance.

Whatever the female equivalent of dean is, Bradshaw is the undisputed dean-ess of South Florida actresses. So it goes without saying that she adds another well-executed portrait to her gallery. She, more than anyone, is battling Smith’s cartoonish characterization, trying to inject some reality and a bit of variety to the role of a Steel Magnolia whose milk of human kindness curdled long ago after a personal tragedy. Her comic timing comes in handy and she’s wonderful firing a baleful glare at Margaret or Murphy when they say something that doesn’t fit her game plan.

The few times that Smith gives her some meat, Bradshaw makes the most of it.  She is the one who gets the chief tonal turning point in the play when she bemoans the disappointment that has blighted her life. Bradshaw/Mary, for once, earns our compassion when she mourns aloud, “If this is all one big test, then why isn’t it fair?”

Turnbull long ago proved herself one of the region’s finest actresses. But Smith has only given her two colors to play with – timidity and drabness – and neither she nor Meltzer has gone much beyond that.

Felix gives the most nuanced performance because his character is so level-headed and even-tempered despite Melissa’s outrageous declarations and Mary’s egging on. Felix invests Father Murphy with a patience that seems the result of the gentling of the years and much experience dealing with questioning parishioners. It does make his didactic tack in the penultimate scene seem out of character, but that’s what Smith wrote, and many Catholics will tell you that’s exactly what he would do in real life.

This all take place in Jodi Dellaventura’s note-perfect set evoking a suburban middle-class home with clapboard exterior, white picket fence, translucent curtains, and flower prints on the wallpaper. Dellaventura, who has a fine eye for props, has subtly scattered small articles of faith around the living room: a modest statue of the Virgin Mary, a picture of Christ’s sacred heart and a font for holy water. Dellaventura has made an enviable reputation working for several smaller theaters in the region, especially Alliance Theatre Lab alongside her playwright/actor brother who spells his name differently. Like her work on Brothers Beckett at the Arsht this spring, this design reaffirms her as a talent to be encouraged.

Mention is also due Luke Klingberg’s subtle lighting shifts and Alberto Arroyo’s dead on costuming. A special nod is needed for Meltzer’s sound design. Not only is every word clear, but he has what must be an encyclopedic Ipod of offbeat but perfectly appropriate music to accompany scene changes for all of his shows. I’m still playing Gaelic Storm’s “The Buzzards of Bourbon Street” that he used to kick off  All New People. In this one, he has a countryified pseudo-gospel number with the line “Everybody wants to go to heaven, but nobody wants to die,” as well as a banjo-flavored version of The Rolling Stones’ “Sympathy For The Devil.”

Meltzer has injected scores of little treats into the action, the favorite having to be Mary’s use of a hand fan to cool off. We won’t spoil it here with more specifics.

Where the play unravels is in the last third when it wants to be taken seriously. The logic of its arguments certainly wouldn’t be offered up by a Jesuit. It’s not clear what has been said during the debate that persuades the sisters or even the priest to end up emotionally and spiritually where they do. Without revealing the end, the priest’s solution to the problems is, while perhaps accurate, a cheat considering all that has gone before.

While the play seems to be questioning religious intolerance, it might make you think a bit about whether any of your own more secular certitudes are unreasonably calcified.