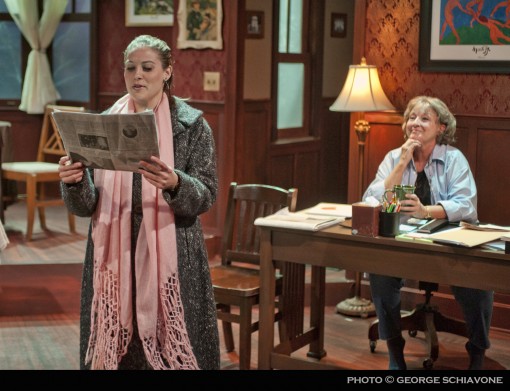 It’s November and there’s plenty on the theater scene to be thankful for in the week ahead.
‘
”’ The most promising is Collected Stories, opening Friday at the Mosaic Theatre in Plantation. Pulitzer-winner Donald Margulies’ 1996 two-hander depicts an established writer and the fan who evolves from prot’g’ to colleague to rival. The show was revived last season in New York with Linda Lavin and Sarah Paulson to laudatory reviews.
‘
”’ This production running through Dec. 5 features Barbara Bradshaw (The Chairs and Sheer Madness), one of Florida’s favorite character actresses in comedies and dramas, and Kim Morgan Dean (Playhouse Creatures and A Body of Water), an effervescent young Floridian who has been trying her luck in New York City.
‘
””””’ On Thursday through Saturday, the ever-scrappy Mad Cat Theatre Company presents Kristina Wong’s surreal one-woman comedy about trying to be environmentally responsible, Going Green the Wong Way, directed by Mad Cat founder Paul Tei.
‘
”’ Opening Friday at the Caldwell Theatre Company in Boca Raton is the return of Vices: A Love Story, the witty and sensual musical that had its world premiere on the same stage a year ago.
‘
”’ It was popular with the younger audience that the reimagined Caldwell was trying to attract. It also won Carbonell Awards for dancer Holly Shunkey as Best Leading Actress in a Musical and AC Ciulla for Best Choreography. ‘The work is a series of vignettes illustrating the wide array of obsessions available in the 21st Century: from sex to chocolate to work.
‘
”’ Director Clive Cholerton said there are few changes to the script, allowing him to focus on directing a finished product rather than concentrating as he did last year on helping shape the raw ‘ and constantly evolving — material. About half the cast is new, although Shunkey is returning along with Carlos Encinias and Lara Janine. It runs through Dec. 12.
‘
”’ Also opening Friday for a two-weekend run is The Diviners at Studio One Theatre on FAU’s Boca Raton campus. It’s the classic tale of rural Americana that focuses on a disturbed young man and his friendship with a disenchanted preacher in southern Indiana in the early 1930s.
‘
”’ Finally, playing Tuesday through the weekend at the Broward Center is the latest entry in the Broadway Across America series, Burn the Floor. Imagine So You Think You Can Dance with people who really can dance. A troupe of internationally recognized ballroom dancers are so good that they will make you too ashamed to ever attempt a foxtrot in public again.
‘
”’ Just announced schedule changes: Fizz, the comedy about the ‘New Coke,’ at New Theatre in Coral Gables has postponed its dates to Dec. 4′ Dec. 19. Also Area Stage Company in Coral Gables has moved the opening of its musical Goblin Market to Dec. 10.
‘
”’ Closing this weekend: 12 Angry Men at Maltz Jupiter Theatre, a first-rate edition of the classic drama.
‘
”’ Ending a week from now: Motherhood the Musical at the Miniaci at Nova, Candida at Palm Beach Dramaworks, Rent at FIU, No Exit at Naked Stage, The House of Yes at The Alliance, and A Behanding in Spokane at GableStage (what are they going to do with all those show-specific props?)