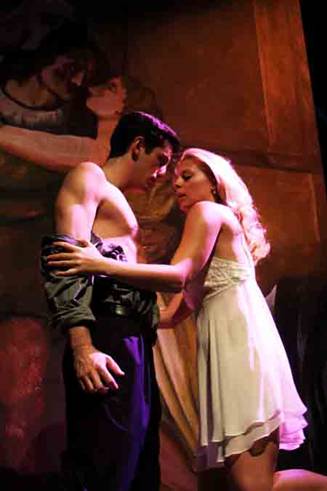 Lara Hayhurst as Clara and Dylan Thompson as Fabrizio in Stage Door Theatre's "The Light in the Piazza." Photo: David Torres

Even though the list of shows worth seeing this season just keeps growing, we’re not even close to exhausting the possibilities.

Beginning Saturday, Broward Stage Door in Coral Springs is taking on its most challenging material in many years, The Light in the Piazza. Based on the film and novella, the 2005 musical was a critical triumph when it played at Lincoln Center. The road show tour was the first theatrical piece to play at the Arsht (nee Carnival) Center in Miami.

The story rendered here by Craig Lucas (Prelude to a Kiss) depicts a wealthy North Carolina woman on vacation in Florence with her beautiful daughter in 1953. The grown daughter has the mind of a child because of an accident, but she begins an affair with a local boy. Their relationship faces serious challenges from both sets of parents as the couple falls deeper in love.

The score by Adam Guettel is completely different from his folk music masterpiece, Floyd Collins. This time, his score echoes classical music and opera, marked by soaring melodies and passionate lyrics worthy of this romantic tale. Guettel may be the grandson of Richard Rodgers, but his style and idiom are unique ‘ simultaneously lush and quirky.

Stage Door is taking a huge chance because very few of its subscribers have heard of the work and it takes a while for some people to get into sync with its musical groove. But Stage Door co-founder Dee Bunn adores the show and has hired Michael Leeds who directed Stage Door’s earlier triumph, A Little Night Music.

Bunn reports while the audience seemed a little stunned at the first preview, nobody left (which cannot be said for the crowd at Floyd Collins). And by the curtain, some people not only stood to applaud, but wept.

The Light in the Piazza runs through April 13. For tickets and information call (954) 344-7765 or visit stagedoortheatre.com.

At the other end of the region, Florida Stage is mounting the southeastern premiere of Michael Hollinger’s Ghost-Writer, opening Friday. Hollinger, who wrote the locally successful Opus about the bickering classical string quartet, now turns his eye to the literary world of 1919.

The premise is that a secretary/stenographer is continuing to type a manuscript that had been dictated by her employer, a famous novelist. The problem is the novelist is now dead, but she keeps producing new pages for the unfinished work. The novelist’s wife sends an emissary to evaluate the stenographer’s claim that she is simply taking down what the novelist’s voice is continuing to dictate. Flashbacks depict the complicated and evolving relationship between the writer and the typist.

I read the script as part of a new play contest this winter and found the work to be an intriguing look at the nature of creativity and inspiration set in a world of romance and elegance.

In the don’t blink department: The scrappy Mad Cat Theatre Company, which should have scrappy capitalized and permanently affixed to its title, is back for a one-night-only two-show world premiere of founder Paul Tei’s The Preservation Society on Friday. The hit-and-run schedule results from its being accepted as part of the prestigious South Beach Comedy Festival underway this weekend. The show will be performed at 7 p.m. and 9:30 p.m. backstage at The Fillmore (the old Jackie Gleason Theater) on Miami Beach. For more information visit southbeachcomedyfestival.com or madcattheatre.org.

And looking ahead, next week should be officially designated ‘Tracy Letts Week in South Florida.’ His Pulitzer Prize-winning three-act epic of family dysfunction, August: Osage County opens at Actors’ Playhouse in Coral Gables on Mar. 11, with a sterling cast of most of the major South Florida actors not working in a show somewhere else this month, including Barbara Bradshaw, Peter Haig, Laura Turnbull, Kathryn Lee Johnston, Amy McKenna, Gregg Weiner, Stephen G. Anthony, David Kwiat, Erik Fabregat, Jackie Rivera and several others.

Opening the next night at GableStage two miles southwest will be Letts’ much lighter follow-up piece, Superior Donuts. It stars Avi Hoffman—back with a beard again—as a former ’60 radical just wanting to be left alone to run the titular business when his life is upended by a young black street kid with dreams of being a writer. gablestage.org