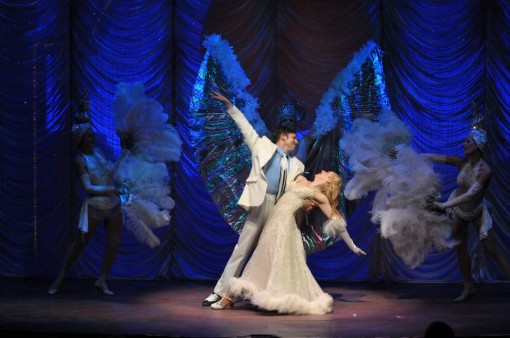 "Crazy for You" runs through April 17 at the Maltz Jupiter Theatre.

It’s a very quiet week for openings, although the schedule starts filling up once again after April 1.

But one major bow is promising: The Maltz Jupiter Theatre closes its regular snowbird season by investing its customary lush production values into the musical’Crazy For You.

The 1992 Tony winner for best musical cannibalized’George and Ira Gershwin songs from many sources and seamlessly melded them with an amusing book by’Lend Me A Tenor‘s Ken Ludwig who overhauled the script of 1930’s’Girl Crazy. The production was a triumph for director Mike Ockrent and his future wife, choreographer Susan Stroman. They created what the advertising rightly billed as ‘The New Gershwin Musical.’ The original cast featured the late Bruce Adler, who won a Tony nomination as the impresario Zangler and much later started a family in South Florida.

The Maltz is pulling out several stops including hiring 17 cast members and choosing Shea Sullivan, an assistant to the legendary tap dancer Henry LeTang, to choreograph the extensive numbers.

Actually, the high point of the next week may be the Carbonell Awards on Monday. The 35th annual event, a sort-of South Florida Tony Awards, recognizes excellence during 2010. The festivities begin 7:30 p.m. at the Broward Center for the Performing Arts, 201 SW 5th Avenue in Fort Lauderdale.

The Theatre League of South Florida will host an after party at the Green Room, 109 SW 2nd Ave., about three blocks from the Broward Center. Patrons can present their Carbonell tickets at the door, where they will be provided with a complimentary welcome drink and a drink ticket.

Individual tickets are $25; rates for groups of 10 or more are $20 per ticket by calling the Broward Center’s box office T’954-462-0222 or visiting’browardcenter.org. Email any questions regarding to’CarbonellAwards@gmail.com.

Also playing this weekend:’Wicked blows in for a three-week stay at the Broward Center,’In the Heights ends its national tour this weekend at the Arsht and, if you haven’t seen it, don’t miss’August: Osage County in its final weekend at Actors Playhouse in Coral Gables.