Hey, the guy�s not really a bum, he�s an Actor 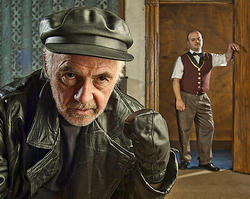 Denis Creaghan in GableStage's current production of "A Behanding in Spokane."

When an actor inhabits a series of characters so well, even savvy theatergoers forget that he’s just playing a role.

For years, South Florida audiences got accustomed to seeing white-haired Dennis Creaghan exemplify patrician Brahmins in A.R. Gurney’s The Dining Room, The Voysey Inheritance and Blithe Spirit among others.

It’s been a shock to some over the past two years that Creaghan has been equally credible trading tuxedos and martini glasses for downscale garb and stubble as the drunken reprobate in Mosaic’s The Seafarer, the venal crook in Palm Beach Dramaworks’ American Buffalo and now through Nov. 21 as the unhinged killer seeking his missing hand in GableStage’s A Behanding in Spokane.

Creaghan, who was a supporting player on Broadway and still works regional theaters such as the Guthrie in Minneapolis, will exhibit his range further in his next role, the dying psychiatrist in Freud’s Last’Session at Palm Beach Dramaworks Dec. 17-Feb. 6.