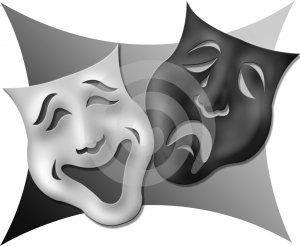 Other than cell phones going off, is there anything half so aggravating as the woman sitting next to you laughing her head off at something on stage that really isn’t all that funny or some guy weeping copiously when it’s not all that sad?

Well, yes, there is. It’s when 95 percent the audience refuses to react at all to what’s on stage. The most they’ll let escape is a twitter (the laugh, not the message) or a sniffle. Do they think they’ll get charged extra for vocally expressing an emotion?

God bless the audiences at Broward Stage Door for still attending theater as if it was a religious requirement. But they are consistently the deadest audiences I’ve ever seen, no pun intended. At the opening weekend of Stage Door’s The Drowsy Chaperone (a glorious entertainment that just closed) the audience chuckled a bit and applauded politely, but they were stingier with their reactions than Scrooge McDuck. This is not unusual.

Any actor or director will tell you that a good theater experience requires the engagement of the audience’s attention and emotions. The audience is an additional element in the nightly alchemy because performers calibrate their work to the reaction they’re getting.

Certainly, you pay your money and you’ve got a right to snooze or fold your arms and dare the actors to entertain you. You don’t even have to respond if the production is deader than your childhood. But you’re just cheating yourself if you don’t realize that you have a responsibility to participate in a worthy show.

One Response to Laugh, blast you, laugh