More on “Mack and Mabel”

Posted on September 2, 2010 by Bill Hirschman 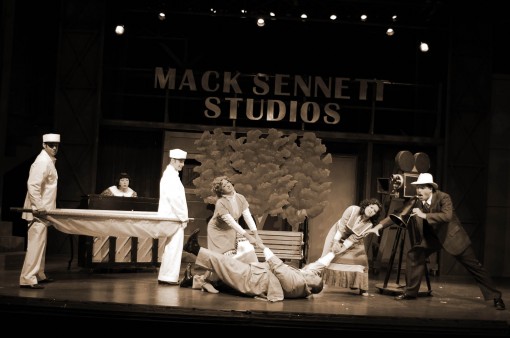 People who saw the original Broadway production of Jerry Herman’s musical Mack and Mabel may have noticed something different in the Broward Stage Door version playing this month.

Director Michael Leeds got Herman’s permission to tweak the script to buttress the problematic libretto of a show that contains one of Herman’s finest scores. It’s an example of the subtle things a director can do to change the tenor of’ a piece.

Some changes came from the 1976 national tour which opened at the Parker Playhouse with Lucie Arnaz and was the first show at the refurbished Jackie Gleason Theater. Leeds knew those changes intimately: He was Tommy Tune’s understudy. Some of the changes were rarely used again in any of the regional theater and British revivals.

The musical is based on the December-May romance between silent film director Mack Sennett and his leading lady, Mabel Normand. In the musical, Sennett has difficulty expressing his love for Normand, driving her into the arms of another director who is eventually murdered. In real life, Normand was investigated for her tangential connection to two separate killings. She reputedly became temporarily dependent on drugs, but died of tuberculosis without reconciling with Sennett. In the Broadway version, as best as we can reconstruct, they make a last movie together, Mabel dies and Mack mourns.

Not exactly the cotton-candy plot of Mamma Mia! To rescue it on the road, bookwriter Michael Stewart tacked on a big production number with Sennett imagining a different fade-out. The song, I Promise You A Happy Ending, winds up with a big finish as the two get married and ride off into the sunset.

Neither ending felt right to Leeds: ‘They put in the happy ending and they have done it in all the revivals, but it never worked like it could; it lost the poignancy.’

So here’s what Leeds did at Stage Door: The fictional wedding has a Mack and Mabel at the altar with the cast crowding around them. When the well-wishers drift away, we see Mack embracing empty space. He looks up and sees a silent movie of the wedding playing above his head. In it, he and Mabel are kissing and they walk off together as the film fades out on the words “The End.” But we see that this was all in Mack’s imagination and he is left alone.

A second structural problem, Leeds says, is that Mabel disappears from too much of the second act. Leeds stages the next to last number, Tap Your Troubles Away, as written so that it is performed by Mabel’s best friend. That number is played against a pantomime of Mabel’s downward spiral including one of the murders — a sardonic comment on the difference between movies and real life. But then Leeds has Mabel come back in a reprise as if she is imagining herself starring in the number.

And for the curious: The ‘custard’ used in the pies thrown at the cast every night is really shaving cream. Recently, the staff has experimented with aloe-infused shaving cream because some cast members have developed rashes.

3 Responses to More on “Mack and Mabel”