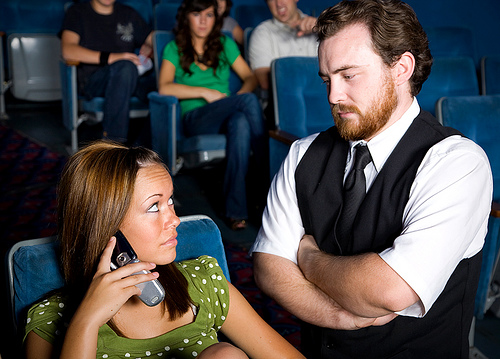 If Sartre was right in No Exit and hell is other people, the next circle of hell would be a theater with rude people.

If you’re on this website, you obviously share our hatred of audience members who seem to think they’re watching a show alone in the privacy of their living room.

On a recent opening night, I sat behind three couples whose firm had contributed cash to the company’s production in a cozy, brightly-lit performing space.

This apparently bought them certain privileges. That included talking to each other intermittently loud enough for the audience and actors to hear them. Several drank steadily through the show; a friend behind them passed around canap’s on a plate. They must have consumed a good deal of liquor before they sat down because one man got up (in full sight of the actors) and walked out during the second act. Twice.

He must have been waiting for word about a new kidney because one of the women in his party, sitting on the front row in full view of the actors, began to text. Presumably this was to keep in touch with the kidney donation center. It is possible she was hearing impaired because apparently she did not hear the clear warning before the show started that texting was forbidden.

Rude, thoughtless, self-centered-‘and wealthy. They wanted to be somewhere else, and frankly, I wish they had been.

Then there’s the other end of the spectrum: At opening night of Dreamgirls at the Kravis, the guy sitting next to us really loved the show. Must have. Because he sang along with half the score, quietly, but audibly enough to disturb those around him. I made a joke about it at intermission and he smiled. His girlfriend was clearly miffed at him already. Neither of which mattered because as soon as the second act began, he was back mumbling and murmuring the songs.

Do you have any instances of appalling audience rudeness while attending South Florida theater productions? Feel free to share and take comfort in the thought that you are not alone.