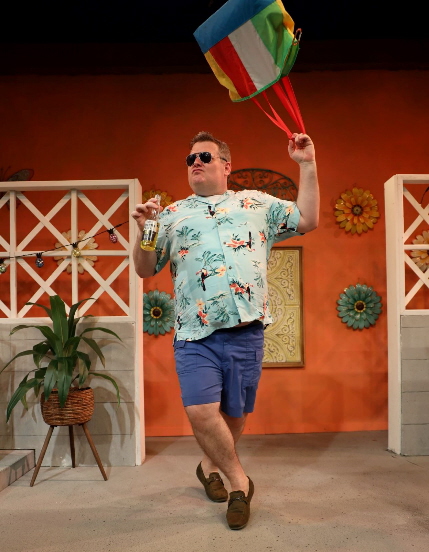 Like them or tolerate them, there’s an inherent archness to the majority of solo theater pieces. It’s born of either chameleonic gimmickry—one actor shape-shifting into multiple characters over the course of the show—or the Brechtian nature of most monologues, with the audience, acknowledged by the actor, participating in the experience. In either instance, we are constantly reminded we are watching a play, and there is a limit to how deeply we feel transported by the material.

Bright Colors is neither a multi-character showcase nor a monologue in the conventional sense.  Dialogue happens, except the other characters, represented by vacant beach chairs, are invisible and inaudible: Mark’s character, Gerry, needles them, peppers them with gripes and sleights and witticisms, uses them as therapeutic sounding boards, and responds to their imagined interjections. It’s kind of nuts, but it’s different, and it works.

(When this conceit revealed itself, my mind wandered briefly to Clint Eastwood, at the 2012 Republican National Convention, haranguing an empty chair supposedly inhabited by President Obama, a hallucinatory instance of bonkers political theatre from a quainter time. That could have been a full-length play, too.)

The setting is a private residence in Palm Springs, where a lavish same-sex wedding is to commence the following day. An old friend of Gerry’s, it seems, is getting hitched to, in Gerry’s perception, a bland aristocrat whom Gerry compares to an ottoman in the furniture store of humanity. The action takes place at the poolside bar, another triumphant tableau from scenic designer Jodi Dellaventura. Framed by actual palm leaves spilling onto the set from either side, the design is a pastel tribute to tropical kitsch, with its string of pineapple lights, its penguin-shaped wine bottle opener, its delightfully out-of-place cacti, all of it embodying what Gerry describes as “cheap luxury at its finest; only in Palm Springs can you find entire kitchens made out of rattan.”

Addressing his unseen friend and onetime lover Dwayne in a pool chair stage left and Dwayne’s 23-year-old boyfriend Mac on the chair stage right—“We’re an Abigail Breslin ahead of him” in age, he quips to Dwayne. Gerry is an endless trove of bon mots as he waxes verbosely about the traffic on I-10, the asininity of alternative-rock band names, and the crippling conservatism of the mother of the paying groom, who requested, in her invitation, “no bright colors or bold patterns” in wedding-day attire.

Quotable lines abound. Gerry describes attending Coachella as being “ear-raped by ironically detached synthpop.” Queen Latifah is a “clown in a wig for guilty white people.” He bemoans the acceptance of gays in broader society as allowing them to have “joint Instagram accounts and to be in Triscuit commercials.”

These greatest hits and more are delivered by a breathless and cyclonic Thomas Mark, the actor bursting onto the set in a state of mania, and never slowing down until well into the second act. He comes off as part Robin Williams and part Stuart Meltzer, a gregarious pontificator in a toucan shirt, traipsing around the patio like it’s his giant sandbox, and diving frequently into his comfortable well of ‘80s and ‘90s pop-culture references. If there were other actors onstage, Mark would leave them with little oxygen to consume.

Watching Mark hold court is entertaining enough. His performance, guided by director Michael Leeds, is an irrepressible study in the illusion of extemporaneity, as his Gerry is frequently, and convincingly, caught off guard by this or that unheard rebuke, diverting his stream-of-consciousness ramblings.

But as a text, Bright Colors and Bold Patterns takes its time to arrive at anything approaching transcendence. Forty minutes proceed without a sense of conflict or dramatic direction, just rim shots piled atop each other like Tetris blocks. It takes the second act for these surface charms to expand, as Gerry, drinking like a fish from the moment he appears onstage, reaches the metaphorical end of the bottle.

It is there, finally, that the façade drops. Leeds allows for stretches of silence and contemplation as Gerry’s nightlong binge of cocaine and alcohol begins to wear off. Mark’s eccentric charm from the first act curdles into resentment, as he permits his character’s vulnerability to emerge from its long dormancy. The sober(ish) Gerry at 5 p.m. is the life of the party; the wasted Gerry at 5 a.m. is boorish, judgmental, mean and desperate. We see the transformation happen in Mark’s, and by extension the play’s, elliptical turn from slapstick comedy to nihilistic tragedy. This is a man who’s even managed to alienate his invisible friends. It’s so stark a turn that even the vibrant set seems a little less colorful, Ardean Landhuis’ lighting subtly harsher.

Gerry arrives, however circuitously, at uncomfortable truths about himself and about this moment in time for gay men in America. If it were a different sort of show, Mark/Gerry might come to us, the audience, for sympathy and understanding. But he’ll have to sort this one out on his own.

Bright Colors and Bold Patterns runs through June 20 at Island City Stage at Wilton Theatre Factory, 2304 N. Dixie Highway, Wilton Manors. The show runs 2 hours, including a 15-minute intermission. Tickets cost $35. Masks are not required, but are recommended for patrons who feel they need to wear them. Call (954) 928-9800 or visit islandcitystage.org.