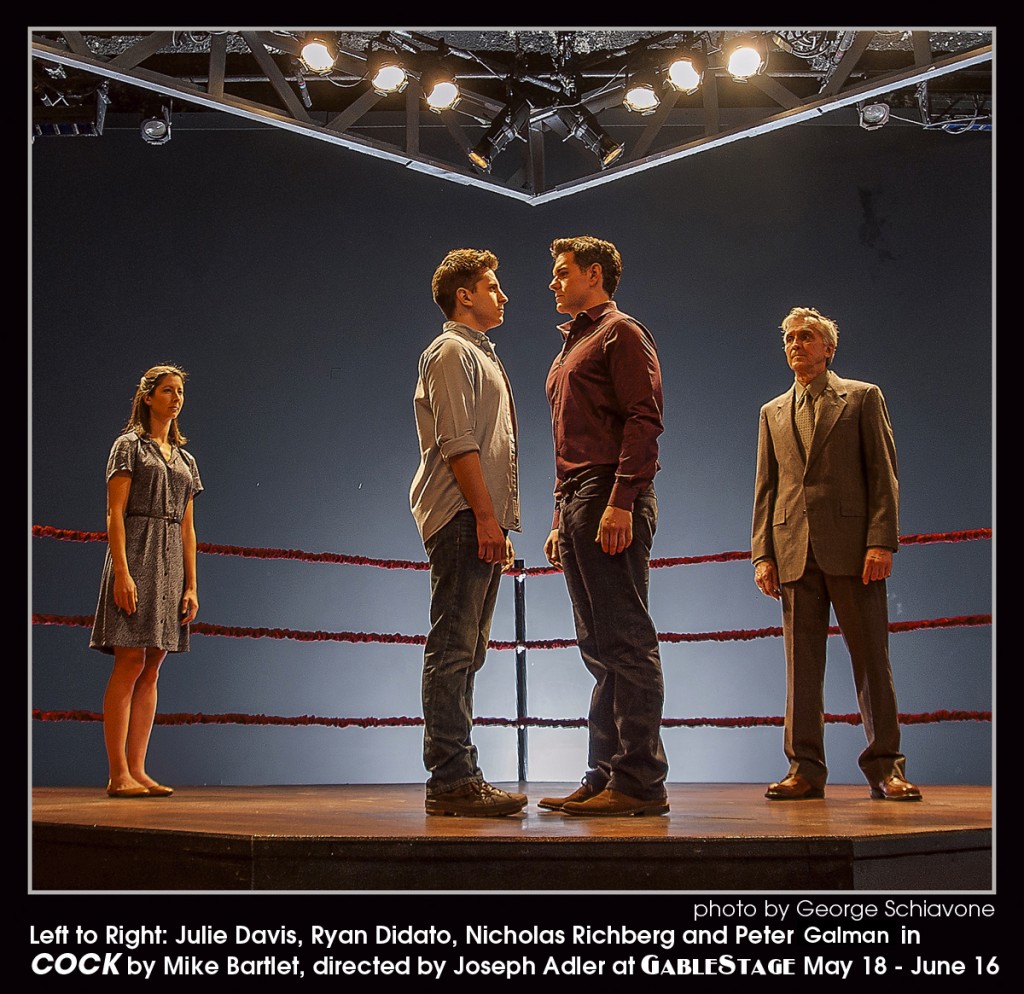 Perhaps the most shocking thing about Cock is that no one takes off his or her clothes.

Cock, by British playwright Mike Bartlett, which is now making its southeastern premiere at GableStage in Coral Gables, is filled with opportunities for characters to get naked, and GableStage artistic director Joseph Adler is known for getting his actors to show a substantial amount of skin on stage.  Instead, characters stay completely clothed and engage in a version of oral sex — in this case, describing their sex acts aloud — while practicing the restraint of hardly touching at all.  And guess what?  It’s sexy.  It’s very sexy.

But sex, despite the title, and despite the plot, is not what Cock is about.  This is a story about love, labels and the pressure society puts on persons to make decisions about both.

Cock centers on John (Ryan Didato) a twenty-something Brit who realizes that he and his older boyfriend of eight years (Nicholas Richberg) are too different to continue their relationship.  But soon after breaking up, a very confused and conflicted John is back, telling his boyfriend he still loves him and begging his forgiveness for the incredible relationship he’s having — with a woman (Julie Kleiner).

What’s a man to do?  Especially a man who has only ever been attracted to men and identifies himself as gay, when he has incredible sex with a woman and falls in love with her?  Is he straight?  Is he gay?  Is he bisexual?  And why does it matter?

These questions are at the heart of Cock, and Bartlett does an excellent job of asking his audience and his characters to take a hard look at the nature of love. Cock is not about John choosing his sexual preference, but the choice he is forced to make in labeling his sexuality in a way that’s socially acceptable.  Rather than simply being a man able to fall in love with a person, not a gender, John is confused and conflicted over being forced to make a decision not only about who to love, but what to call himself. And which is less acceptable: being in love with two persons at once, or being in love with both a man and a woman?

To examine these issues, Bartlett has created a character who is pliable and insecure, which makes him easy prey for his two lovers. While John complains that his older boyfriend won’t allow him to grow up, he doesn’t mind when his girlfriend describes him as a pencil drawing that hasn’t been colored in yet. She finds this attractive, this quality John has that allows others to imprint on him. John is controllable, often surrendering his will to others, which puts more at stake when his lovers demand he make a decision not only about them, but also about himself.

Cock is a minimalist production, especially by GableStage standards.  There are no props, no costume changes. The trappings of theater are stripped down to better reveal the language, the characters, the dilemma. Scenes are separated by the sound of a bell. The set, by Lyle Baskin, is a boxing ring cut in half diagonally, with the corner in the center, so appropriate to the combative nature of relationships and the way John’s boyfriend and girlfriend fight to be the victor with John as their prize. Jeff Quinn’s lighting is evocative, both moody and stark.

As John, Didato embodies the character’s confusion as well as insecurity.  Kleiner does well with her role of the everywoman fighting for her happily ever after. Peter Galman is funny and touching as John’s boyfriend’s father, who comes to dinner to help his son fight for John.

But the standout here is Richberg, who imbues his character with texture and soul. Even though John is the character in conflict, John’s boyfriend, in Richberg’s capable hands, is the one who seems to go through the most changes. Sometimes he’s catty, hateful and venomous, and sometimes he’s insightful, loving and vulnerable. Sometimes he oppresses, other times he seems the real victim of the piece. And Richberg’s performance is riveting.

GableStage excels at producing theater that is thought provoking, and Cock raises hard questions about love, sexuality and relationships. It gives no easy answers, leaving the audience to ponder, explore and discuss, making Cock the perfect marriage between play and theater.  Don’t miss it.