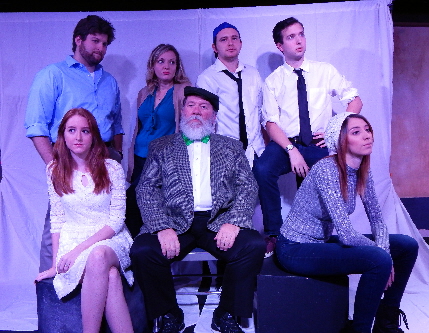 See Rock City and Other Destinations is a young person’s musical with, at its best, an older person’s soul. Its target audience is most certainly millennials—most of its characters seem perched precariously on the summit of their 20s, quivering at the abyss of adulthood—but without its generation’s snark or detachment. Unfashionable sincerity wins over fashionable irony, which has ensured some longevity for this scrappy musical, which premiered off-Broadway in 2010.

Whether See Rock City constitutes anything you haven’t seen before is another question. Less a fully formed show than a thematically linked shorts compilation, composer Brad Alexander and book writer/lyricist Adam Mathias’ breakthrough musical is a patchwork of playlets stitched into an uneven quilt of insecurity, loneliness, angst, humor and wanderlust. Evening Star Productions’ regional premiere, which has enthusiasm and heart to spare, suffers from similar inconsistencies across its seven-piece ensemble.

See Rock City is a story of connections formed through places, and it’s a particular kind of a place that captures the creators’ hearts. Like a travelogue of shopworn Americana, the settings constitute the sort of roadside attractions that are as iconic as they are unhip. These destinations—partially succumbed to time, neglect, nature, progress and carbon—are populated, over the show’s 85 intermissionless minutes, with characters also in need of tune-ups.

In the opening sequence, Jess (Christopher Alvarez), a lonely traveler seeking to find himself on the open roads of the mountainous south, picks up a bored server in a roadside diner (Yasmin Adli) for a journey to the show’s title outcropping on Lookout Mountain, Georgia. Next, we meet Evan (Robert Fritz), an obsessive amateur UFO-ologist with a video camera and tripod, staking out a position in the wilderness just outside Roswell, hoping against hope for extra-terrestrial contact. Lauren (Jeanine Gangloff), a defiantly single teacher from Virginia, meets a kind divorce lawyer (Chris D’Angelo) while on a sentimental trip to the Alamo with her palsied grandfather (Murphy Hayes). Three sisters (Adli, Gangloff and Maria Jimenez) attempt to dispense their father’s cremains on a cruise to Glacier Bay; a pair of prep-school best friends (Alvarez and Fritz) explore surprising emotions on a clandestine escape to Coney Island; and a runaway bride (Jimenez) considers taking the ultimate plunge—off the cliffs of Niagara Falls.

This breadth of material runs a gamut from the inspired to the routine, sometimes within the same scene. Lackluster lyrics (“hold you,” rhymed with “told you,” etc.) mar the intendedly moving “Grampy’s Song,” in the Alamo vignette, but the scene is otherwise among the show’s strongest. Of all the cast, Gangloff has the brightest of futures, her effortless naturalism and sonorous voice elevating her solo number “All There Is to Say.”

Among the males, Alvarez exhibits the strongest range, both vocally and dramaturgically, from the yearning optimism of the title song to the palpable one-two punch of “You Are My” and “Dark Ride” in the Coney Island escape—a disquieting sequence handled by director Geoffrey Short with imaginative choreography and unexpected tenderness alike. The Glacier Bay sequence, featuring the three actresses’ poignant a cappella harmonies on “Three Fair Queens,” is an exquisite standalone piece with a fully realized story arc.

The Roswell stuff—despite this writer’s personal geek-outs when it comes to anything UFO-related—is less potent. Fritz doesn’t have the vocal chops to transcend the show’s most monotonous numbers, “We Are Not Alone” and “Here.” The structure of his character’s narrative, revisited throughout the show as a running gag, doesn’t help things; on the contrary, it interrupts the flow of the stronger scenes, climaxing with a most predictable punch line.

The music in Evening Star’s budget-conscious production is provided by pianist Anthony Campisi, who invisibly translates the tuneful score from his station off stage right. Short, doing quadruple duty as scenic, lighting and sound designer in addition to directing, might have benefited from delegating responsibilities. Aurally, the show feels atmospherically bereft. Sounds are too infrequent to establish context, so that when they are integrated, they almost feel intrusive. The curious set—multi-purpose blocks and painted wooden waves, with skeletons of suitcases attached to a barren wall—is serviceable if not compelling.

Like its vacillating characters, Evening Star’s production loses its threads only to find compelling new ones. Just be patient enough to wait out the dips.