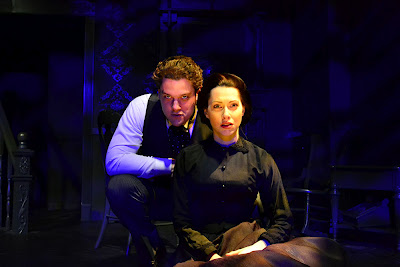 Gather round the campfire whose glow barely keeps the darkness at bay and listen to master storytellers spin you a summer night’s ghost story.

There are no special effects, no makeup, no chainsaws, nothing but two actors, a couple of candles and the chilling truth that horror lies not in the sight of a blood-soaked maniac, but in the interior terror of the mind.

Attend the tale of The Turn of the Screw, Henry James’ psychological thriller given a superbly accomplished production as The Naked Stage’s first outing in almost two years.

Actually, many ingredients contribute to this witch’s brew top-lined by the flawless performances of Katherine Amadeo as a sexually-repressed governess in 1872 England and Matthew William Chizever inhabiting an emotionally-indifferent uncle, a venerable housekeeper, a troubled 10-year-old  boy and an ineffably evil spirit.

With the skill of an orchestra conductor, director Margaret M. Ledford has deftly wrought a world of half-shadows and whispers. She paces the evening masterfully, from Chizever’s slow delivery of passages like a connoisseur savoring the bouquet of a fine wine, to rapid-fire exchanges between angst-engorged characters, to the terror-fueled crescendo of  souls and minds twirling on the precipice of damnation and insanity.

Ledford is best known for eliciting nuanced performances and pacing; her physical staging , while expert, is rarely noticeable to civilians. But this production allows her to exercise her visual sense because she doubles as the lighting designer. From the first striking of a match in the darkness to the final blowing out of the tapers in a chandelier, Ledford integrates nimbly morphing circles of light, backlighting, even the absence of light to further plot and mood.

It is expecting too much to terrify 21st Century theater audiences when monsters invade the auditorium of multiplexes and fly planes into skyscrapers. Further, the medium of theater has always had difficulty creating terror other than the play (not the recent film) The Woman in Black, a similar work of highly theatrical storytelling.

But Ledford, working from Jeffrey Hatcher’s tight adaptation, comes reasonably close to unnerving cinema-jaded spectators although actual dread is missing.  Instead, she and her cast triumph at handcrafting a tale that might be about demonic possession, but just as likely is the inducement of madness because of denied sexual urges.

James’ 1898 novella has been retold a dozen times, from television versions to  Benjamin Britten’s opera to Jack Clayton’s stunning 1961 film, The Innocents, with Deborah Kerr. It tells of a parson’s daughter who is hired by a very handsome London dandy to be the governess at an isolated country house for his young niece and a nephew currently at boarding school. He does not want to be bothered under any circumstances, although she wonders how she can connect with the man romantically.

But once at the estate, the housekeeper begins to slip hints of a sordid tragedy regarding the governess’ predecessor and a charismatic valet whose deaths might account for the little girl turning mute. Soon after, the 10-year-old boy appears on the doorstep, having been expelled for “unspeakable” acts.

The fascination is where James, Hatcher and Ledford take it from that point, a dark country where the audience cannot know for sure how much is real and how much occurs in the governess’ mind.

Amadeo and Chizever’s work is so solid, so finely-crafted, so seamless that it’s hard to dissect or even describe. Start with the fact that most contemporary American theater actors have difficulty convincingly portraying 19th Century characters with that stilted syntax, antiquated vocabulary and now-quaint attitudes such as readily believing ghosts are trying to possess the souls of children. But possession must be possible because what else explains how these two actors so completely become these high-collared, buttoned-down residents of 1872?

Amadeo smoothly traces the governess’ arc from a naïf confidently eager to meet a challenge to a terrified unhinged victim. As she descends, her visage and quavering voice mirror her imperiled soul under attack, exuding both strength and fragility.

Chizever pulls off the difficult trick of portraying four different characters. Several local actors have transformed from one personality to another in a split second. What Chizever accomplishes is making each so credible that you stop marveling at the acting and just forget it’s a young man playing a middle-aged domestic or a deeply disturbed boy.

Naked Stage, which has had so little finances that it has had to scrap some productions, makes a little go a long way. Nowhere is this more evident than in how Antonio Amadeo designs evocative settings in Barry University’s shoebox of a theater. Working in tandem with Ledford’s lighting, Amadeo has taken some molding, empty picture frames, an armchair and a staircase that leads nowhere to create a fully-realized world. He has painted literally everything a dour grey and built furniture and stairs that have melted into the walls and floor. His imagination and skill show some larger theaters that a modest budget – tiny in his case — doesn’t mean a setting needs to look like it was whipped up in someone’s garage.

Save a tip of the hat for Kathryn Johnston for helping the actors find and maintain a variety of convincing British accents.

There is only one misstep. Chizever provides the sound effects of disembodied wails, the whoosh of a sudden draft and the ominous tolling of a clock’s gong. His sonorous baritone serves him well all night, even when imitating women and children. But for some reason, his noises ring so manufactured that they nearly elicit laughs.

One warning: Hatcher moves this story along quickly, often setting up a scene or dropping in a major plot point with a single sentence, so it’s essential that the audience pay close attention for the entire 85 minutes.

Naked Stage, co-founded by the Amadeos with John Manzelli, has been on hiatus almost two years as the Amadeos attended to family business. Fans of their 4:48 Psychosis and No Exit feared they might not return. It is really, really good to have them back.

Several times during the evening, one character or another asks, “Have I seduced you?”  The answer is yes.

Want to read the original novella? Project Gutenberg offers it free on the computer and as an e-book by clicking here.