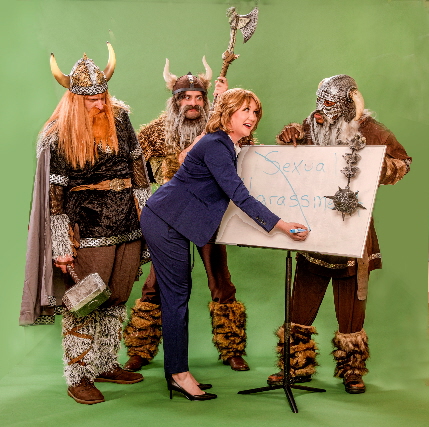 Lindsey Corey tries to give Vikings a lesson in sexual harassment awareness in The Presentation, one of the plays in City Theatre’s Summer Shorts / Photos by George Schiavone

Almost every year, our reviews of Summer Shorts have had one sentence that boiled down to “some entries were better than other; some were terrific, some fell flat.”

This 24th annual festival of short plays scores as the most consistent, polished and satisfying work beginning to end that City Theatre has produced in recent seasons.

Every piece is solid, from the hilarious musical in which the dead Franklin Pierce lobbies a student to rewrite her report about his lackluster presidency, to the chilling confrontation between a white cop in training and a black detective testing his ability to handle racially explosive situations.

Under the leadership of Artistic Director Margaret M. Ledford, all the varied programs that City Theatre produces year-round have continued their upward arc of quality, but this year reflects subtle changes. A second musical slot has joined the mix – now down to eight playlets instead of nine. Even the outright comedies store a gentle message or social commentary beneath the laughter, such as positing a modern consciousness-raising counselor on sexual harassment trying to rechannel the rape and pillage instincts of a quartet of ancient Vikings.

What seems different is the aforementioned polish and assuredness, surprising since Shorts must deal with South Florida’s criminally short 2 ½-week rehearsal period. The performances and the direction are smoother and more complex than in some other years. The writing ranges from insightful to unassailably workmanlike, sidestepping the company’s seeming tradition of having one script that you couldn’t figure out why it was chosen or at least jettisoned in rehearsal. Some works that might have stumbled a hair are rescued by the enthusiastic acting, dexterous directing and especially the mood-setting lighting by Eric Nelson and environment-altering sound design by Steve Shapiro.

The evening opens with the world premiere of the musical Franklin Pierce: Dragon Slayer! The Untold Story of America’s Debatably Least Effective President with book and lyrics by Preston Max Allen and melodic score by Will Buck. Yawney embraces the whimsy of eighth-grader Jennifer (Richter) bummed to have been assigned one of the history’s most forgettable presidents for a school project. But as she falls asleep, Pierce (Reiff) appears to persuade her to reassess him, including explaining that he did little to deter slavery because he was busy fighting an invasion of invisible evil dragons. Both this and the other musical feature musical direction by Caryl Fantel.

Frozen Foods by Ian August is a classic example of a droll script elevated to another level by the acting and direction. Corey is an everyday hausfrau shopping in front of a frozen food case at the Superfood Market. Her friend Patrice finds Corey stunned into paralysis by the realization that this week the Salisbury steak dinners are being sold four packages for the price of one, even though she had paid full price last week. The inexplicable reasons for the sale prompt Corey into a spiraling inquiry into the seeming randomness of life. Her escalating aria rises like a lava flow of ludicrousness into a despairing questioning of God, life, reality and even existence itself. Corey with Yawney’s pacing does a master class job in her growing ascent into absurdity. Again, the lights and sound help the intensifying arc. Here, and in character after character, during this evening, Corey displays a wide and deep ability for comic characterizations that would be award-worthy.

The Forgotten Place is a brilliantly conceived and executed world premiere script by Jeff Locker and perfectly paced by director Ramirez. Reiff is Kip who is applying for an initially undisclosed job with the boss Eric, played by Jacobs. While the skit begins with all the perfunctory pleasantries of a job interview, it turns out that Jacobs is interviewing candidates to be his life-long friend. As if discussing what the job will entail, they discuss and virtually act out the entire arc of a decades-long friendship with its highs and lows, but speaking about it in the future conditional tense.

The actors and the script make that both terribly funny and poignantly evocative as the two men – still in an interview setting — inhabit the emotions they “will” feel at the full spectrum of camaraderie and betrayal.

ERIC: So you should know I have anxiety and as it gets worse I’m going to end up canceling on a lot of stuff.
KIP: Anything important?
ERIC: Well, definitely a few BBQs, some dinners, and your 40th birthday party.
KIP: Oh shit, that sucks. I’m going to be really upset.
ERIC: But it’ll only be because I’m going to have a panic attack

The first act closes with Telephones and Bad Weather, a commissioned world premiere from Shorts veteran Steve Yockey and directed by Quiroga. Corey is at the end of her rope telling friend Richter that her husband (Weiner) won’t stop building something in their backyard, the neighbors won’t stop complaining, a mysterious orange phone connected to nothing won’t stop ringing, and it may never stop raining. The kicker is Weiner is building an ark – yes, that kind of ark — and the voice at the other end of the phone is God. Simultaneously droll and silly, it actually harbors a quiet message about global warming – this time the flood is our fault, not God’s.

Light is crucial in This Is How Ghosts Speak by Jen Diamond and directed by Ledford — crucial in that there isn’t much and sometimes none. We’re in the basement of a theater on the brink of a production when the power goes out. Maintenance man Weiner and manager Patrice only have flashlights for illumination, pointed at each other, as they try in vain to fix the problem. Joined by Goth intern Richter who can speak to the dead, a ghost story unfolds – sometimes in pitch blackness.

The strongest and most affectingly topical piece is Greg A. Smith’s Schrodinger’s Gun, precisely helmed by Ramirez. Reiff is a nervous white police trainee brought against his will into an isolated basement room by Jacobs, a black detective. Jacobs gives Reiff his loaded gun on an interrogation table. Then he lays down a briefcase and tells Reiff that he may or may not have a weapon inside. Reiff is assured quite convincingly by Jacobs that if there’s a gun in the case, Jacobs will shoot him. Jacobs then repeatedly asserts that there is no weapon while he promises to kill Reiff if there is. Jacobs keeps reaching to open the briefcase. And then he does. Issues of trust, life-threatening jeopardy, instant judgment and racial stereotyping all collide in an instant. Incidentally, Schrodinger was a Nobel-winning physicist who worked on the quantum mechanics, but who gave rise to a thought experiment that echoes what happens here on stage.

Then for something completely different, The Presentation by Lia Romeo and directed by Ledford is the aforementioned sexual harassment session led by a beaming and patient Corey. Her charges wearing horned helmets and foot-long facial hair are Weiner, Jacobs, Reiff and Zye Reid.

Closing the evening is Big Fat Cow, a world premiere musical with book and lyrics by Hillary Rollins and music by William Johnson, and directed by Ledford. A now over-the-hill Elsie the Borden cow (a delightful Weiner), sings and dances flashbacks of her hay-day starring Corey as the younger Elsie and the entire cast hoof-kicking in production numbers. Rollins’ punny lyrics are wit incarnate.

Young Elsie, singing about her beau Elmer:
“I THOUGHT WE’D HAVE A FUTURE
IN A LONG BARN BUILT FOR TWO
BUT HE WOULDN’T GO TO WORK, HE ACTED LIKE A REAL BEEF JERKY,
SO I HAD THEM TURN HIM INTO GLUE!

As always, Ellis Tillman’s costuming is as funny as the material, especially the dancing cows in the finale and the Viking outfits. Jodi Dellaventura did the sets including the background environment of a Miami Beach edged with colorful striped cabana material and surfboards.

Most of the works were finalists in City Theatre’s national Short Playwriting Contest from the past two years. The result is that this is one of the uniformly strongest Shorts productions in every category in some seasons. 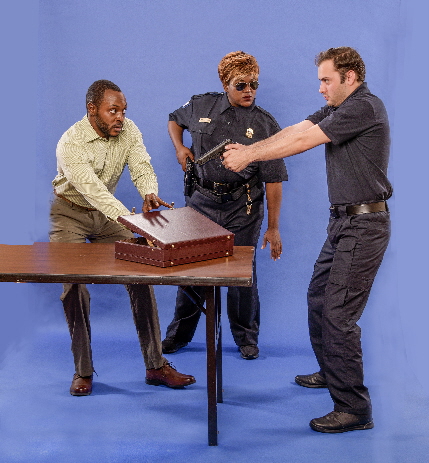