Posted on February 9, 2015 by Bill Hirschman 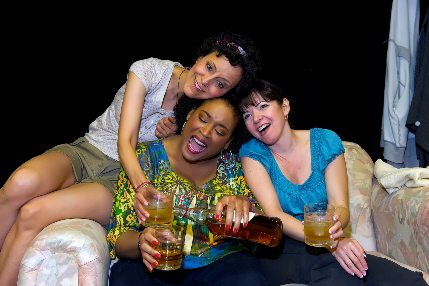 Pilar Uribe, Lela Elam and Jaqueline Laggy in Sunday on the Rocks at The Women’s Theatre Project

The Women’s Theatre Project, the Carbonell-nominated South Florida company focused on works by and about women, is closing after 33 productions at five venues in all three counties, its officials announced early Monday. TWTP won strong support among theatergoers of both sexes, but developed a particular following among lesbians who rarely saw their lives reflected in the region’s theatrical offerings.

Since its first staged reading in 2001, its incorporation in 2002 and its first full production in 2004, The Women’s Theatre Project presented world and regional premieres such as Speaking Elephant by local playwright Terry Lawrence in 2009.

Like every other company, the quality of its productions varied, but it mounted acclaimed work such as Eclipsed, about the oppression of women in war-torn Africa; The Year of Magical Thinking, drawn from Joan Didion’s memoir; The Interview about a Holocaust survivor, and Playhouse Creatures about women in the theater.

Its mission, cited on its web page, was “The company was founded from a need for women’s voices to be heard, a desire to break down the stereotypes of women propelled by the media, and to create more professional theatrical opportunities for women of all shapes, sizes, races, and ages.”

A news release Monday stated, “The start of the New Year and 2015 season ushers in an opportunity to acknowledge and celebrate the fact, that The Women’s Theatre Project was able to fulfill the intention of its mission, and create a lasting legacy.”

“TWTP was fueled by the desires of professional women in theatre, who were drawn to the concept of creating a cultural profile of a diverse female voice on stage. Our choices broke with stereotypical portrayals of women propelled by the media, and we created theatrical opportunities for women of all shapes, ages, and races,” the release read. “On behalf of our Board of Directors, we thank all the various artists who have worked and passionately believed in us, and those who will continue to develop and perpetuate the vision we created.”

The theater has been dormant since its last production, Red Hot Patriot about columnist Molly Ivins, in March. It has struggled for a few years since leaving a tiny storefront space in the warehouse district north of downtown Fort Lauderdale close to a liberal and gay community in early 2012. At that time, the theater had been operating with a budget of $100,000. About 30 percent of the company’s budget had come from grants when it was in Broward County, about 41 percent from ticket sales and about 25 percent from donors

In February 2012, when TWTP lost its Broward space, the company cancelled its season. Then-President Meredith Lasher said, “We’re not going out of business, we’re not folding…. We have thousands of dollars in the bank.”

The company relocated by the end of the year with a scaled back budget to the Willow Theatre in Sand Sand Park in Boca Raton. Attendance dropped some, but the shows such as Red Hot Patriot, The Interview and The Lyons were critically acclaimed for their quality. But moving to Boca cost them a sustaining grant from Broward County and Boca audiences did not flock to the theater.

Croft wrote Monday night, “The idea of closing TWTP was a unanimnous decision reached by our board of directors, based on a few factors: The move to the Willow Theatre, while giving us a home and lovely theatre space, as a government-run facility didn’t allow us to produce a season of four mainstage shows, readings and Girl Play, all parts of our programming that impacted our finances and fund raising. Although we had two successful seasons there, it truly wasn’t a good fit for our mission, and we also had to forfeit our grants from Broward County. As a company, we no longer felt that we wanted to take on another move, after having five homes. We are leaving on a positive note, with no debt, and always having honored our commitments to our audience and artists.”

TWTP was created by a core group of theater professionals including actress-producer-costume designer Lasher and artistic director Genie Croft, with many other people volunteering to lead the organization during its life including treasurer Jacqueline Laggy.

It produced play readings in 2002 and 2003, and mounted its first full production with the Southeastern premiere of Carolyn Gage’s The Anastasia Trials in the Court of Women performed at the Old Davie School Historical Museum. It later operated out of space rented from the Fort Lauderdale Children’s Theater and later in converted warehouse space in Cooper City in 2006.

The company and its members have been honored with Carbonell Award nominations including best actress nods for Linda Bernhard for Sister Cities in 2008 and Playhouse Creatures in 2010, Carolyn Johnson as best supporting actress for Jar the Floor in 2008, Karen Stephens as best actress in Bridge & Tunnel in 2010, and Speaking Elephant which was nominated for best new play. Lasher won the Carbonell’s Bill Hindman Award in part for her work with TWTP in 2004.

Among its most high-profile projects was Girl Play, an annual lesbian playreading festival begun in 2009 featuring new works of female playwrights throughout the country and internationally. While the theater’s fare reflected all sexualities, its respect and attention to gay issues attracted a faithful following of lesbian patrons and supporters. The New Times weekly nicknamed TWTP the “Best Place to Meet Intelligent Lesbians.”

It also hosted the world premiere of 6 Women Playwrights Turning 60 in 2006, a play festival by Baby Boomer playwrights. 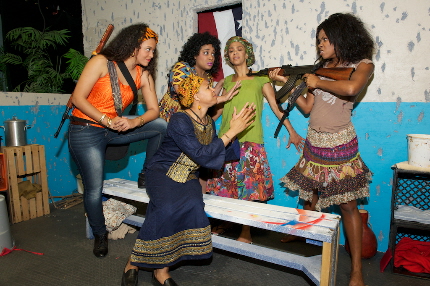 A scene from Eclipsed