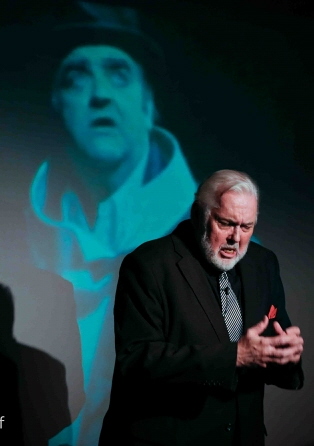 If you’ve dreamed of sitting in the upstairs  bar of Sardi’s to hear journeymen trade war stories about Broadway’s past, you can get a taste at Jim Brochu’s new one-man show, Character Man.

The veteran New York actor-playwright, who triumphed in 2009 with Zero Hour,  spends a couple of acts at Broward Stage Door recollecting his meetings with famous and not-as-famous stalwarts from Jackie Gleason to Jack Gilford, Zero Mostel to David Burns.  Interspersed, he sings the signature songs that these gentlemen and some women made famous like Gilford’s “Meeskite” from Cabaret and Mostel’s “To Life” from Fiddler on the Roof.

It’s an exceedingly pleasant amble in the affable company of Brochu whose career has intersected on stage, in dressing rooms and taverns with two generations of actors who thrived because of their talent rather than their less-than-matinee-idol looks.

It’s a clear labor of love for Brochu who wrote the piece and has revered these folks since he was a star-struck teenager meeting Burns (Horace Vandergelder in Hello Dolly! and Senex in A Funny Thing Happened….) Burns helped him get started in theater, introducing him to seemingly every famous name in the business.

For people who can run the theater category on Jeopardy without breaking a sweat, Brochu’s choice of heroes is a warm validation of their mutual appreciation of talents like the supremely talented Burns, Barney Martin and George S. Irving whose reputations are fading in popular culture.

It might appear that the show is just a way for Brochu to sing some favorite songs; Burns appeared in The Music Man, which leads to Brochu singing Robert Preston’s “Trouble.”  But using his own life and that of Burns as touchstones,  Brochu has created a legitimate through line that keeps returning to his adoration of these performers he memorializes, most gone now.

Brochu wisely doesn’ t imitate these performers in these songs although some inescapable flourishes creep in. He performs them as if he was doing the role himself. Nowhere is this more evident than in three numbers from Fiddler on the Roof. Although we know he can channel Mostel, this Tevye daydreaming of being a rich man is Brochu’s unique creation, other than stomping around the stage, arms raised and torso shaking.

Others are forgotten gems such as “The Butler’s Song,” introduced by Irving in the 1976 flop, So Long, 174th Street. In this daydream of a would-be young actor, his imaginary butler tells Greta Garbo that his master cannot come to the phone because the master is having sex with – and the butler lists every pre-war movie star you’ve ever year of.

Compared to his volcanic recreation of Mostel in Zero Hour, Brochu is a gentle giant exuding a reserved gusto and a quiet charm. He’s learned from his heroes how to hold a stage without chewing the scenery. With a few exceptions, he stands still center stage, perhaps waving arms for emphasis or doing a couple of off-hand dance steps, but that’s it.

As a playwright, Brochu has a nice way with a vaudevillian quip such as recalling his theater-loving father:  “He was handsome, charismatic and I never knew he drank until I saw him sober.” Or noting when his father dated Joan Crawford: “I wanted him to marry her so Joan Crawford could be my mother.  Think of all the fun we’d have.”

The tenor turns touching as he recalls his father’s dying request to hear his son sing “Give My Regards To Broadway” or how Burns died literally on stage so that “The last two sounds Davy Burns ever heard were laughs and applause.”

The entire show is enhanced with evocative productions photos, personal snapshots and headshots of these performers projected on screens on either side of the stage — plus a weird home movie with unintelligible sound depicting a party at Charles Nelson Reilly’s home in Los Angeles.

Dave Torres’ set and Ardean Landhuis lighting’ convincingly evoke a “bare” stage between productions. It’s strewn with the flotsam and jetsam of past productions such as a couple of orphaned theater seats, two-dimensional life preservers, racks of stage lights, ladders – all the detritus that summons up ghosts of past productions and past performers.  The only quibble is that the video monitors are placed so high and off to the sides that audience members find themselves watching the photos rather than Brochu.

Brochu is ably accompanied by Stage Door stalwarts David Nagy on piano and Rupert Ziawinski on bass. They add their voices as well, standing in for the townspeople’s chorus in “Trouble “from The Music Man and or the pirate band in Cyril Ritchard’s “Capt. Hook’s Waltz” from Peter Pan.

A shorter version tried out the Metropolitan Room in New York on Oct. 1 and is slated to move to the York Theatre Company off-Broadway in September. Based on the reaction of the audience at Stage Door this weekend – people who likely saw these performers when they were alive — it’s likely to have a long, solid run.

This entry was posted in Performances, Reviews and tagged Character Man, Jim Brochu. Bookmark the permalink.