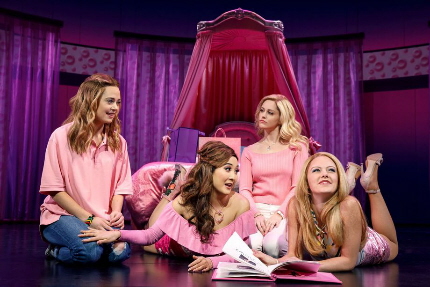 The Plastics plus one in Mean Girls / Photo by Joan Marcus

For those convinced that theater has no future among pre-Millenials (and who clearly have not been to Wicked, Legally Blonde or Lion King), you should have been with us a few weeks ago when we made a belated visit to a Sunday matinee of the musical version of the film Mean Girls.

Although it started previews in March, 90 percent of the sold-out house in November were teenagers or their thirty-something moms. Before the show began, the trio sitting behind us were reciting deathless lines from 2004 movie.

But this hilarious yet surprisingly uplifting musical comedy will appeal to anyone of any sexual identity of any age, especially if they recall what a nightmare high school was (which honestly is the perception of 98.6 percent of the population). If you are in New York, go out of your way to see it since much of award-nominated cast is still in place; when it tours beginning a year from now, buy the ticket.

Some people must have been deemed certifiable to think you could make a musical out of Tina Fey’s wildly popular film about outsiders and misfits finding their worth in a clique-dominated high school. But the script deftly adapted by Fey, infectious music by Jeff Richmond (lots of TV shows including 30 Rock), and subtly insightful lyrics by Nell Benjamin (Legally Blonde) are delightfully fused together under the leadership of Broadway’s premier director-choreographer Casey Nicholaw (The Book of Mormon and Something Rotten!).

Not surprisingly, eight months in, this production still bounces with energy, punches holes in pretensions and slides along with a fluid ease – all of which hides an immense amount of performing talent and expert stagecraft.

The plot deviates a bit from the film, but the primary pieces about being an outsider and “insider” are there. Sixteen-year-old Cady Heron (Erika Henningsen) moves from a childhood on the African savannah to the far more perilous jungle of a suburban Chicago high school. She tries to find a place to fit in, guided by a goth girl Janis (Heather’s Barrett Wilbert Weed) and theater nerd Damian (the multi-talented Grey Henson).  She sidesteps the math nerds, even though she is a math whiz, and hooks up at Janis’ urging with the ultra-insider clique, The Plastics led by imperious queen bee Regina (Taylor Louderman), her sycophantic partners Gretchen (Ashley Park) and gorgeous but not too bright Karen (Kate Rockwell). Initially sent by her running buddies to spy on the clique, she becomes seduced by their popularity. But when the boy she has her eye on is claimed by Regina, the plot gets complicated.

The entire show is rife with an appropriate scatological pre-occupation with sex, blue language and a roller coaster of self-esteem. While it’s all done with wry humor, it’s as accurate as anyone dares to remember of the pain of being a teenager.

All the characters have terrific numbers such as the uber-dependent Gretchen in “What’s Wrong With Me,” the Kelly Ripa lookalike Karen in “Sexy,” gay running buddy Damian, and Janis (another terrific turn from Weed) in the angry song of self-worth “I’d Rather Be Me.”

Yet another surprise is that when our heroine learns her hard-won lesson (finding your self-worth inside yourself rather than from others) the gloriously triumphant finale “I See Stars” never rings false. Its messages of inclusion, compassion and the like are done with such earnestness and finesse that it never feels like required insertion of a moral in a Disney movie.

Nicholaw has proven himself an A-list stager dating back to Spamalot and The Drowsy Chaperone. Mean Girls bears it out from the faux-Lion King opening with second-rate animal puppets to the rolling scenery changes with cafeteria tables on wheels to the choreography incorporating lunch trays.

The scenic design by Scott Pask and lighting by Kenneth Posner are inextricably melded with brilliant video designs by Finn Ross and Adam Young that change locations and moods as inventively but fluidly as if it was, indeed, a movie. The way they handle Regina getting hit by a school bus is inspired. All those technical demands plus sound by Brian Ronan require split second timing coordinated by unsung stage managers and backstage crew.

Mary-Mitchell Campbell, one of Broadway’s leading musical directors, heads the bright and brassy band. She maneuvers her cast through a score that encompasses
American Idol blasts, Broadway production numbers, and some heartfelt anthems.

A shout out: The ushers at the August Wilson Theatre frequently patrol the aisles during the show, spotting people using their cellphones either to take video or to text their friends. With quiet but firm manner, they shut down violators from the overture to the finale.  Bravo!

Mean Girls is in an ended-run at the August Wilson theatre, 245 W. 53nd St.. For more information https://meangirlsonbroadway.com/.

This entry was posted in Performances, Reviews and tagged Mean Girls. Bookmark the permalink.