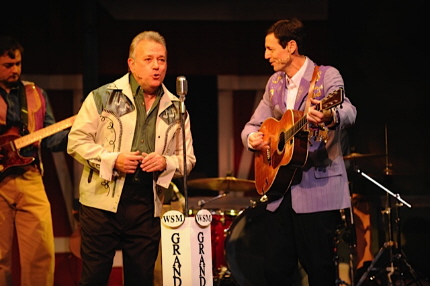 Eric Anthony, Neil Friedman, and David Lutken are among the ensemble in Ring of Fire at Arts Garage / Photo by Amy Pasquantonio

A word of warning — Ring of Fire, the Johnny Cash Musical, is not a biographical play about The Man in Black, nor is it anything remotely close to the 2005 Reese Witherspoon, Joaquin Phoenix film Walk the Line, or last year’s Lifetime television movie of the same name that starred pop singer Jewel.

Honestly, it’s smarter than that. This music-heavy tableau, now on stage at the Theatre at Arts Garage in Delray Beach, offers more depth than what its title may imply. For those expecting a traditional musical, advice would be to give up the notion before walking in the door. You’ll have a better experience if you allow yourself to be swept away in each moment (and there are many moments) to truly appreciate it. And when that appreciation hits, Ring of Fire lights a burning flame right through to your soul.

Ring of Fire, the Johnny Cash Musical tells its story through 39 songs (40 with the encore). There’s no “book” per se, no linear story to follow, but there is a beginning middle and an end. “It’s a play made up of songs,” is how creators William Meade and Richard Maltby Jr. described the show when it opened on Broadway in 2006.
This is, in fact, a songbook, a deeper look into J.R. Cash’s music  — not only songs that he wrote, but those of other musicians Cash added to his repertoire. This isn’t just Cash’s story, but a pastiche of Americana.

Three couples represent different stages of life, sometimes conjuring Cash, yet always embodying him. Mostly through the lyrics, shared life experiences come through— from the frustration of longing love (My Old Faded Rose) to the turmoil of escaping a Southern flood (Five Feet High and Rising) to canvassing America (Hank Snow’s I’ve Been Everywhere).

Every once in a while a voiceover booms overhead. Yes, it sounds like J.R. Cash, talking about his mama who “always called my voice a gift,” and in the second act, commenting on prison: “then there are those people who really aren’t in prison, but feel like they really are.”

The cast of actors/musicians are Sam Sherwood, who is mostly paired with Nyssa Duchow as the young couple going through courtship and early marriage; David M. Lutken (also the show’s co-director) and Deb Lyons are the middle-aged couple, settled into life and still trying to keep the fires burning; Helen Jean Russell and Neil Friedman are the older couple, doing what marrieds do in their twilight years. The male principals weave in and out of what could be construed as a representation of Cash, but it’s broader than that. Lyons could, at times, be June Carter Cash, but there’s nothing here that commits her to it, except her looks and her wonderful voice.

Supporting musicians Eric Anthony (who is also the musical director of the show) and Jon Brown are on stage with the principals, co-mingling with them, and playing “extras” at the Grand Ole Opry as radio performers and prisoners at the famous Folsom Prison.

All of the actors/musicians are multi-talented, each showing their flexibility, mostly on guitars, but sometimes on bass, sometimes on washboard, sometimes moving from keyboard to drums.

I’ve Been Everywhere is an acoustic guitar fans dream as the entire cast of eight take to the stage, lined up, each strumming an acoustic guitar. It’s so visually and aurally rich with the traveling tongue twister of a song. Going to Memphis plays with percussion, creating a rhythmic beat out of chains dropped into a metal pail (Lyons “plays” the bucket instrument), while spoons clattering on metal plates create more percussive sound.

The recreation of the Grand Ole Opry brings in the comedy with the three women filling in as a trio from West Virginia, The Duck Sisters, who sing the clever Flushed (From the Bathroom of your Heart). The guys take their turn as a trio that tell the story of a hound who can’t stay out of the hen house for (Dirty Old) Egg Suckin’ Dog.

The popular A Boy Named Sue about a now-grown man who goes looking for his father to even the score for being given a girl’s name is a highlight. This is where Sherry Lutken’s direction excels as seen throughout, with choreography and staging that serves to accentuate the song-stories. Here, Sherwood is the boy named Sue and Friedman is the father who left after bestowing the unfortunate moniker. The on stage barroom brawl looks spontaneous but it’s the nifty fight choreography that makes this such a crowd pleaser.

David Lutken soars in his interpretation of the lonely lament of Sunday Morning Coming Down, a song written by Kris Kristofferson, but which Cash made into a No. 1 hit.
Friedman gets the spotlight for Man in Black, two times actually with a Part 1 and Part II, but his approach lacks the strength that the complex song requires. This was Cash’s anthem, and an explanation why he always wore black: “I wear the black for the poor and the beaten down, livin’ in the hopeless, hungry side of town, I wear it for the prisoner who has long paid for his crime, but is there because he’s a victim of the times.”

He’s much stronger when paired with Russell, who shines in the lovely duet that will always remain a Johnny Cash-June Carter  treasure, Far Side Banks of Jordan. And he has a good ‘ol time with the farmer’s alley oop Look at Them Beans. Duchow stands out in her primary task as fiddler, capturing the Southern old-time fiddling style with detailed precision.

The production values here amp up the appeal. Richard Cromwell’s sturdy set captures the feel of a Southern backyard with its wooden fence. Black and white photos on either side show landscape snippets of Cash’s life:  his boyhood home in Arkansas, his church, Folsom prison, and the WSM studios where the Grand Ole Opry was recorded. Michael Kelly’s sound, with its train rolling down the track and other ambient noise, creates atmosphere, and Larry Bauman’s costumes, from farm hand to flounce to prison wear, are a comfortable mix that are overstated when necessary (the Opry) and otherwise perfectly suited to complement the overall Americana tone.

Theatre at Arts Garage has had great success with its unusual and daring selections such as last year’s Beyond the Rainbow, a cabaret inspired revue of the life of Judy Garland, and its Arts Garage Radio Theatre series that recreates the great tradition of radio plays. Ring of Fire brings this collection full circle.

Ring of Fire runs through July 13 at The Theatre at Arts Garage, 180 NE First St., Delray Beach (north side of the parking garage). Performances 7:30 p.m. Wednesday-Friday, 2 p.m. Saturday and Sunday. No Saturday night. Running time two hours with a fifteen-minute intermission. Tickets are $30-$45.  Thursdays nights throughout the run, the cast hosts a hootenanny and those who want to join in can bring their instrument of choice. For tickets and information, call (561) 450-6357 or visit www.artsgarage.org

This entry was posted in Performances, Reviews and tagged Theatre At Arts Garage. Bookmark the permalink.