With Uproarious Humor And Aching Empathy, Thinking Cap Keeps Up With The Joneses 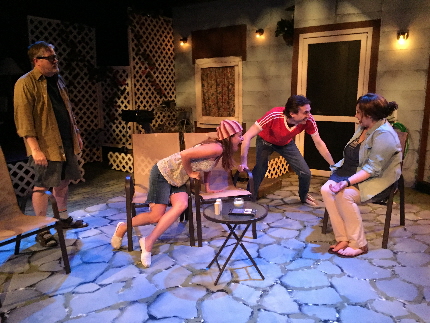 The opening scene of Will Eno’s The Realistic Jones, as staged by Thinking Cap Theatre, is one of the funniest things I’ve seen in years.

Director Margaret Ledford’s pacing is assured and leisurely—far from the whiplash lunacy of a farce—yet the play’s zingers accumulate and compound at a quickening rate. Don’t linger too long on the subtle genius of one absurd exchange or you’ll miss its follow-up, and the follow-up to the follow-up. It’s like an excised skit from some groundbreaking sketch series deemed too weird, and too smart, for TV.

Sharing a similar character dynamic with Lisa D’Amour’s Detroit, The Realistic Joneses documents the evolving relationship between pairs of neighbors in the suburbs of an unspecified mountainous area of the U.S.

It opens on a quiet, starry night, and Bob (Mark Duncan) and Jennifer Jones (Casey Dressler) are enjoying the tranquility, though it’s clear they’re not the best communicators. Topics are broached and eschewed, thoughts form and dissipate, observations are derailed by distractions. Each potential conversation sputters like a jalopy, never quite starting:

BOB
What are we doing right now? Math?

JENNIFER
No, we’re—I don’t know—just sort of throwing words at each other.

All of a sudden, they hear a swift bang and a coda of rustling. Has an animal toppled their garbage can? No, it’s just their new neighbors, a couple of stranger Joneses, John and Pony (Noah Levine and Gretchen Porro), making an appropriately dramatic entrance around the back of their house. They just moved into a property 200 feet away, and they’ve brought along an ice-breaking bottle of wine. “We know that house,” Bob says. “Someone else used to live there.” “Who knew the place had such an interesting history?” John replies.

Lines like these puncture the banality of everyday conversation, poking at the ways in which we extend dialogue even when we have nothing to say. Eno’s script is a deconstruction of chitchat—its subjects, its diction, its tempos. It’s a play full of false starts, rim-shot one-liners and crazy rhythms, and Ledford’s ability to turn them into naturalistic action and movement cannot be overstated. Connections between characters are so tenuous that Ledford is less the leader of a unified symphony than a conductor of four separate compositions, all playing discordant melodies. Yet they sound marvelous together.

Laughs continue as the show progresses, though the humor is more deliberately sporadic, lessening a bit with each scene, and with the gradual revelations that both pairs of Joneses picked their neighborhood for reasons medical as much as environmental.

Language remains a point of disconnection and interpretive confusion. Jennifer’s affectionate “I think about you” is received negatively by Bob, and John is surprised when his observation that Jennifer has “a lot of composure” is taken as a compliment. Pony encapsulates one of the show’s themes when she blurts, “You don’t have to say something every time someone says something!” It becomes clear that their communicative disharmony consists of flailing attempts to break through the stasis and the static of their diminishing lives, eventually wending toward statements of profound melancholy.

Ledford’s cast is uniformly exceptional, starting with the best work we’ve seen yet from Porro. Eno’s absence of character description gifts actors with a blank slate, and Porro treats Pony as a kind of bipolar 12-year-old trapped in the body of a thirty-something woman. Her performance is perennially perched on one side or the other of an emotional seesaw, lurching from funny to despairing, righteous to broken, hyper to hypersensitive, and finding plenty of moments for the kind of ill-advised coquettishness that forecasts the play’s later developments.

Levine’s performance also ranks among his finest, full of imaginative choices and precise in its comic timing. His wiry frame and easygoing demeanor elegantly mask John’s existential depression, which manifests in his desire to leave his body and just “disappear.”

Dressler and Duncan are clearly directed to be the adults in the room, more mature than their manic neighbors but with a marriage just as in need of mending. It’s nice to see Duncan, often typecast as a rubbery funnyman, exceling in a muted, quiet-desperation sort of role.

Your heart tends to ache the most for his long-suffering spouse. Dressler has tapped into the yearning Jennifer feels for a union of mutual love and admiration, clinging to every pretense of a compliment from her husband like it’s a divine proclamation. When John tells her she has pretty but sad eyes, we can see what he means.

The action plays out on Alyiece Moretto’s efficient, two-tiered, L-shaped set, with Bob and Jennifer’s porch centrally positioned underneath the two houses. Beyond differentiating nocturnal domestic shadows from scenes in brightly lit interiors, Eric Nelson’s evocative lighting helps propel a momentous scene outside John and Pony’s house, in which a blinding red home-security light functions as an important story element. Nicole Stodard’s costume design is studded with eccentricities befitting the characters, including what look to be bowling shoes on Levine for much of the play, and the dreaded sandals-and-socks combo for Duncan.

The second act of The Realistic Joneses can be a tough sitting. Several complex bonds form and sever between characters, some of whom have deteriorated physically. Their linguistic disjoints are, purposefully, no longer as amusing as they used to be. This shift is a necessary deterioration, as much as Ionesco’s Exit the King presents a necessary deterioration.
Which is why I wanted more from the play’s full-circle denouement, with its needless charity massaging out most of the roughness. Unorthodox conversational patterns and all, the weirdness of the previous 90 minutes feels more realistic.