Talkin’ In The Green Room With… Daisy Tanner. 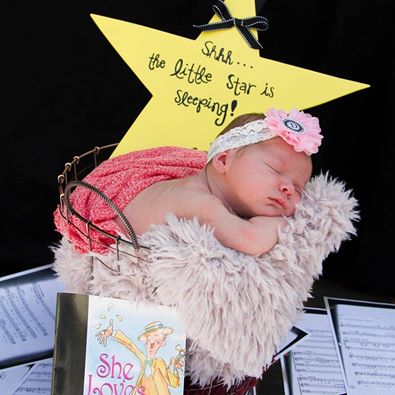 Welcome to a regular, if intermittent feature: Irreverent, lighthearted question & answer sessions with some of South Florida’s best known professionals and rising stars.

Some show business legends say they were born in a trunk offstage in between the matinee and evening performances.

Daisy O. Tanner can’t quite say that. But the two-month-old daughter of acclaimed local actors Shane and Amy Tanner  will make her stage debut alongside her parents, playwright Michael McKeever and Jan McArt on Friday, June 10  in a staged reading of Tony Finstrom’s new play with music Wave Your Flag at Lynn University.

“Jan plays a movie star who has an aversion to babies,” wrote Finstrom. “And there’s this short scene where someone comes on holding a baby and she reacts.

“Well, I figured ‘Hey, we’ll just use a doll.’ But, you know, Daisy’s proud parents have put her photos all over Facebook. So suddenly it was like a scene out of The Producers, where I found myself sitting in front of my computer screen, shouting ‘That’s our baby!’ ”

McArt, a South Florida theatre icon since the mid-1970s, giving legions of local actors work over the years, said “I’m thrilled to give another kid her first break!”

None of this seems to have gone to Little Miss Tanner’s head, as she showed in an interview she and her parents graciously gave Florida Theater On Stage.

What future role do you have your heart set on? Baby June in Gypsy?

The one Michael McKeever’s going to write for me. For my three-week birthday, we had a little chat about the character…. I don’t want to ruin the surprise though.

Do you have a before or after show ritual?

Eat, Sleep, Poo, repeat (this is also my during show ritual)

Um……have you met my parents? Definitely Sondheim. For the sake of being diplomatic, I recognize the genius of both men. However, Sondheim has consistently explored relationships between parents and children so he takes the lead in my book.

What advice to have for struggling young actresses?

You can’t rush perfection (after all, I made my Earthly debut 2 weeks late) Secondly, know your worth.

What advice have your parents given you?

Do your initials D.O.T. have a special significance? Any Sondheim reference?

Indeed! Well, the acronym DOT is the name of my parents’ favorite role written for a female in musical theatre. To break it down name by name: D: “Daisy” is the name of a character on the BBC series Spaced. Mommy and Daddy watched this series together many years ago while they were falling in love. In their starry-eyed daze, they proclaimed if they ever had a little girl, her name would be Daisy. O: “Olivia” comes from mommy’s favorite actress Olivia De Havilland. Olivia was also a name Shakespeare was credited for creating and using in his play Twelfth Night! And “T”…..well, that’s obvious!

What must be in your dressing room?

An Ipad playing the Hamilton mp3. Mom says there may be tickets available in time for my sixth birthday.

Oh….gee….I’ve never considered NOT performing. Hmmmm….well, the first time I heard my Daddy’s voice from inside the womb, he said “Be a Dentist” …. so, that I guess! (Editor’s note: Shane Tanner was playing the dentist in “Little Shop of Horrors” at the time for Slow Burn Theatre Company.)

Have you developed any tricks to upstage your fellow actors?

It’s a demanding role; how much rest do you need a night?

What is your favorite audition piece?

What are your favorite musicals?

Well, I’m very much into Hamilton, but Babes in Arms is a close 2nd!