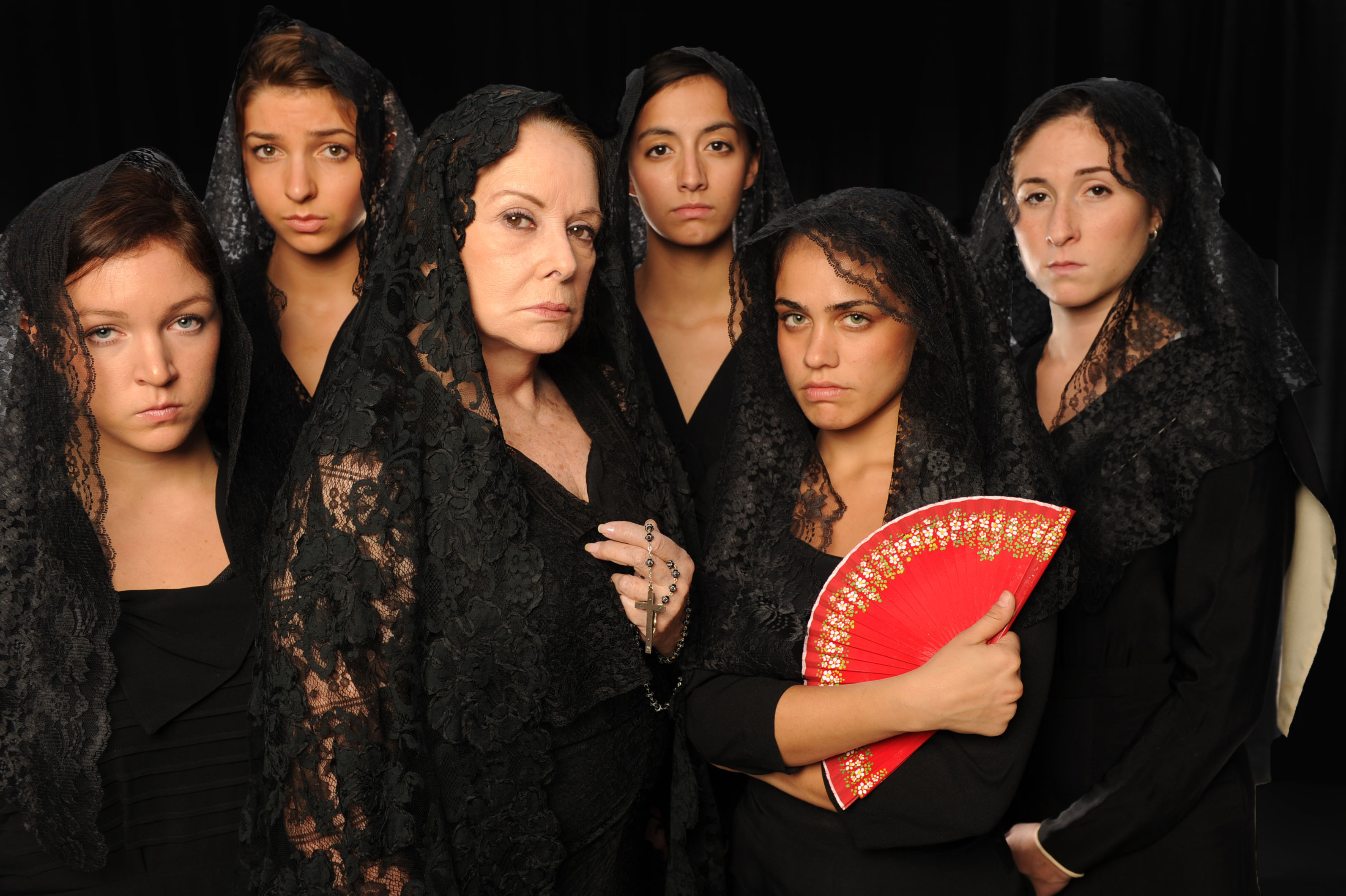 Front three: Megan Kinney as Magdalena, Isabel Moreno as Bernarda Alba and Connie Pantazis as Adela. Back three: Amandina Altomare as Angustias, Annette Hammond as Amelia and Rachel Lipman as Martirio. / Courtesy of the Adrienne Arsht Center/Photos by Justin Namon for WorldRedEye.com

It’s all about synergistic partnerships.

The production of The House of Bernarda Alba opening Thursday in Miami is a fusion between The University of Miami and the Arsht Center for the Performing Arts, between professionals and theater students, between translator Nilo Cruz and UM’s new theater chief Henry Fonte, between the college and the heavily Hispanic population.

The classic drama is a three-week English language co-production of the university’s Department of Theatre Arts and the Adrienne Arsht Center’s Theater Up Close season in the black box Carnival Studio Theater.

“This creative collaboration with one of the premier performing arts centers in the southern United States, which also happens to be in our own backyard, offers students a paid, real-world working experience on a world-class stage and ensures that they will have a competitive edge upon graduation,” said Fonte, department chair and producing artistic director of its Jerry Herman Ring Theatre.

To initiate the collaboration, Fonte chose Federico Garcia Lorca’s tense family tragedy rooted in jealously, envy and sex, what he calls ”the most important Spanish play of the 20th century.”

The title character is a domineering matriarch of a rural family ruling over her grandmother and five daughters. Confined to their house by their mother because her husband has recently died, the women’s tightly-tamped down passions and fears roil. But when the eldest daughter inherits her father’s money and attracts a suitor, jealousies and resentments explode. It’s a tale of obsession, honor, repression and psychological violence.

“It’s such an exploration of the real human condition and what lies right under the surface. These are sisters who are torn apart by the tyranny of their mother, completely oppressed. When one man shows up, all hell breaks loose,” Fonte said.

This version is a 2005 English translation by Karin Coonrod and Miami-bred Nilo Cruz who is serving as a “distinguished professor” this year at the university.

Cruz is juggling other assignments including the reverse translation into Spanish of the new play Hamlet, Prince of Cuba to bow in March at the Asolo Repertory Theatre in Sarasota and later at the South Miami Dade Cultural Arts Center. But Cruz has dropped in to advise the UM production and has collaborated with Fonte to make minor trims and to second guess his original translation.

“He’s been very forthcoming and helpful with that,” Fonte said. Cruz has agreed to some tweaks that make the 75-year-old play a little less clunky. “It’s a fantastic play, but it was written in the early ’30s and has things which we might consider a little funky today.”

What Coonrod and Cruz achieved in an oft-translated script “was to get very, very close to the poetry of the language in (the original) Spanish,” Fonte said. That’s unsurprising since Lorca’s poetic imagery has been a seminal influence on Cruz’s own writing.

Although the play runs three acts, Fonte assured that one of the play’s virtues is “it is so tightly written. It’s a firecracker of a play. It’s a spring that is wound very tightly. It’s a who-done-it. It’s got suspense. And the audience will be out by 10 o’clock.”

Another component of the project is the mentoring. Most of the roles and many of the technical support positions are filled by UM students getting on-the-job training and being paid for it. But they are learning first-hand from three professional actresses in the cast: Edna Schwab as the grandmother, Isabel Moreno (an aunt in Cruz’s The Color of Desire seen at Actors Playhouse) as Bernarda, and Elena Maria Garcia, best known as a comic actress, playing the maid, La Poncia.

“They have been so generous and nurturing to the student actresses. It’s been a real love fest,” Fonte said.

Fonte’s choice came from exploratory conversations with Scott Shiller, executive vice president of the Arsht Center, about a partnership.

“When first started to talk to Scott, I was expecting he’d say, ‘Let’s come up with some frothy little comedy or musical.’ I was very surprised when he said, ‘I really would like to have something serious and meaty on this stage. There are plenty of opportunities for light frothy comedies (elsewhere) in Miami.’ ”

The partnership resonated with Shiller’s vision. “I have always believed that one of our missions is not just to employ local actors, but to contribute to the next generation of artists living and working in South Florida, to find a way to attract all these students coming out of the graduate programs and keep them in South Florida, and increase the artist pool that already exists,” Shiller said.

But it also played into both institutions’ desire to connect more deeply with the region’s Hispanic population, which historically has not supported English-language theater.

“This community is almost 70 to 80 percent Spanish speaking; even the Americans speak Spanish here. So we’re combining a great play with a great audience that will appreciate it,” Fonte said.

Fonte has the credentials to build that bridge because his appointment as department chair last summer brings him full circle. He came to Miami from Cuba as a boy and graduated from Miami High School.

Over the years, he has been an actor, director, playwright and producer in New York City and across the country. His special interests encompass musicals and developing new works, both of which he pursued for the past 12 years at The Hartt School, the performing arts conservatory at the University of Hartford.

Under his leadership at UM, the department’s production season kicked off last month with Cruz’s Night Train to Bolivia and continues next month with the world premiere for Forever 54, a musical about the disco era conceived and directed by famed choreographer Tommy Tune and written by Mark Saltzman, best known for The Tin Pan Alley Rag.

The Up Close season is the Arsht’s initiative to co-produce its own shows in the black box theater in collaboration with various troupes. Formally creating a six-show series, the center also is hosting three plays by the fledgling local company Zoetic Stage, Miami artist Teo Castellanos’ 10th anniversary production of NE 2nd Avenue and is bringing in another production from the House Theatre of Chicago that staged last season’s The Sparrow.