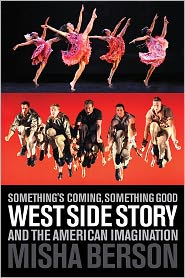 Something’s Coming, Something Good: West Side Story and the American Imagination By Misha Berson


West Coast author Misha Berson got it right when she observes that West Side Story’s place in world-wide popular culture exceeds that of a mere musical.

As she says: “In Japan and South Africa, Cairo and Kalamazoo, people who have no truck with any other Broadway musicals can sing a few bars of  ‘The Jet Song’ or ‘Somewhere.’ They can name the leaders of the two warring Manhattan street gangs the show focuses on, Bernardo (of the Puerto Rican Sharks) and Riff (of the Euro-American Jets). They know where the dewy and doomed lovers Maria and Tony first met (at a dance in a community gym).”

What other musical has penetrated the popular consciousness to such an extent? The Sound of Music comes to mind – surely the image of Julie Andrews twirling on a mountaintop, the list of “favorite things” and the written-for-the-Broadway-stage song so many believe to be a Tyrollean folk-song, “Edelweiss” are in the same league with “the most beautiful sound I ever heard – Maria” and a balcony scene played on a fire escape.

Both, of course, achieved such penetration through movies, but there was something in each that made them ripe for such reactions. Seattle theater critic Berson has turned her wide-ranging but highly detailed focus on the Bernstein-Robbins-Laurents-Sondheim masterpiece: “Romeo and Juliet” converted to a purely American musical of star crossed lovers on the streets of New York City.

There are dozens, or perhaps dozens of dozens of books about West Side Story but if you have a general interest in the show, its development, its elements, its history and its impact, this book covers all of that. It goes deep enough into multiple areas to satisfy, without going so deep that it leaves you feeling that you are drowning in either detail or analysis. Berson not only writes well, she seems to have a fine sense of when enough is enough. Thus, this 280-page book remains intriguing all the way through and each of the 15 chapters feels satisfyingly compete.

And what chapters they are! Their titles, each using a quote from the show, tell the scope of coverage. Let’s walk through the material, chapter-by-chapter:

1 – “With a Click, With a Shock: Enter West Side Story” lays out just what this musical is.

2 – “Now It Begins, Now It Starts:”  West Side Story from Brainstorm to Broadway Premiere” presents a chronology of the show’s development.

3 – “A Time and Place for Us: The Book and Characters of ‘West Side Story’” includes a pithy but insightful discussion of each of the major characters and a scene-by-scene synopsis along with a brief  bio of book writer Arthur Laurents.

4 – “Gonna Rock It Tonight: The Staging of West Side Story” gives a detailed look at the casting decisions, the design elements and the unique rehearsal techniques of choreographer/director (and overall conceiver) Jerome Robbins, along with a brief bio of this fascinating, complex man.

5 – “The Most Beautiful Sound I Ever Heard: The Music and Lyrics of West Side Story.” Recognizing that the music and the lyrics were inseparable elements of a unified whole, Berson combines a detailed discussion of each in her lengthiest chapter. Here she includes bios of Leonard Bernstein and Stephen Sondheim along with the complete instrumentation of the original score in the Broadway pit at a level of detail even greater than you will find in Steven Suskin’s irreplaceable volume The Sound of Broadway Music. Her analysis of Bernstein’s music is both easily understood and perceptive as she works her way through specific songs and dances. It includes the best short definition I’ve seen of the unusual musical element used so often in the score, the tritone. She calls it “an ‘unstable’ and pungent pair of notes … consisting of two successive notes with three tones between them.” Her equally effective analysis and explanation of Sondheim’s lyrics includes the observation that the line in One Hand, One Heart that “only death can part us now” offers “a shiver of foreshadowing. She does miss the double dose when Sondheim shifts the lovers later to the belief that “even death won’t part us now.”

6 – “Shooting Sparks Into Space: The Dances of West Side Story” details each of the seven major dance sequences of the show.

7 – “I Have A Love: ‘Romeo and Juliet’ and ‘West Side Story’” analyzes which parts of the Shakespeare play became elements in the musical.

8 – “We Ain’t No Delinquents: West Side Story And The Rise of Juvenile Delinquency” is the only chapter that uses a quote from the show that seems to be a less apropos line than other possibilities such as any one of a half dozen from “Gee, Officer Krupke” including “Golly Moses, natcherly we’re punks!,” “Leapin’ Lizards, That’s Why I’m So Bad!,” “Like We’re Psychologic’ly Disturbed” or my favorite, “Hey, I Got A Social Disease!”

9 – “What Was Just A World Is A Star: West Side Story The Movie” includes a good description of the five weeks that Robbins took to shoot the opening dances on the streets of Hell’s Kitchen in New York that were supposed to be done in two, the dubbing of the singing voices of some of the cast and a detailed list of changes from stage to screen. Berson includes quotes from some reviews of the movie.

10 – “The Swinginest Thing: West Side Story Recordings.” Berson doesn’t pull her punches in her assessment of the strengths and weaknesses of individual recordings, giving credit where credit is due but pointing out where each fails to reach her standards. Those standards are solid and defensible. (Which, of course, is to say her judgments are consistent with my own.)

11 – “Here Come The Jets: West Side Story In Production Around The World” covers the success of subsequent productions and major revivals such as the recent Broadway edition that had some lyrics translated into Spanish by Lin-Manuel Miranda.

12 – “Stick To Your Own Kind: Bigotry and West Side Story” examines bigotry both as dealt within the show and the issue of bigotry on Broadway in general.

13 – “Gold-Medal Kid With The Heavyweight Crown: The Rise Of The Dancer-Choreographer” looks at the increased importance of the blend Robbins brought to Broadway productions.

14 – “We Got Troubles Of Our Own: Broadway’s Youth Musicals.” Here Berson deals somewhat too briefly with youth-oriented musicals that she sees as following up on some of the breakthroughs of West Side Story, including  Hair, Rent, Spring Awakening and American Idiot.

15 – “Suns And Moons All Over The Place: West Side Story In Popular Culture” is billed as a “selection of nods” to the show on film, on television, on the internet and in print.

If you have room for just one West Side Story book on your theater shelf, this is the one to get.