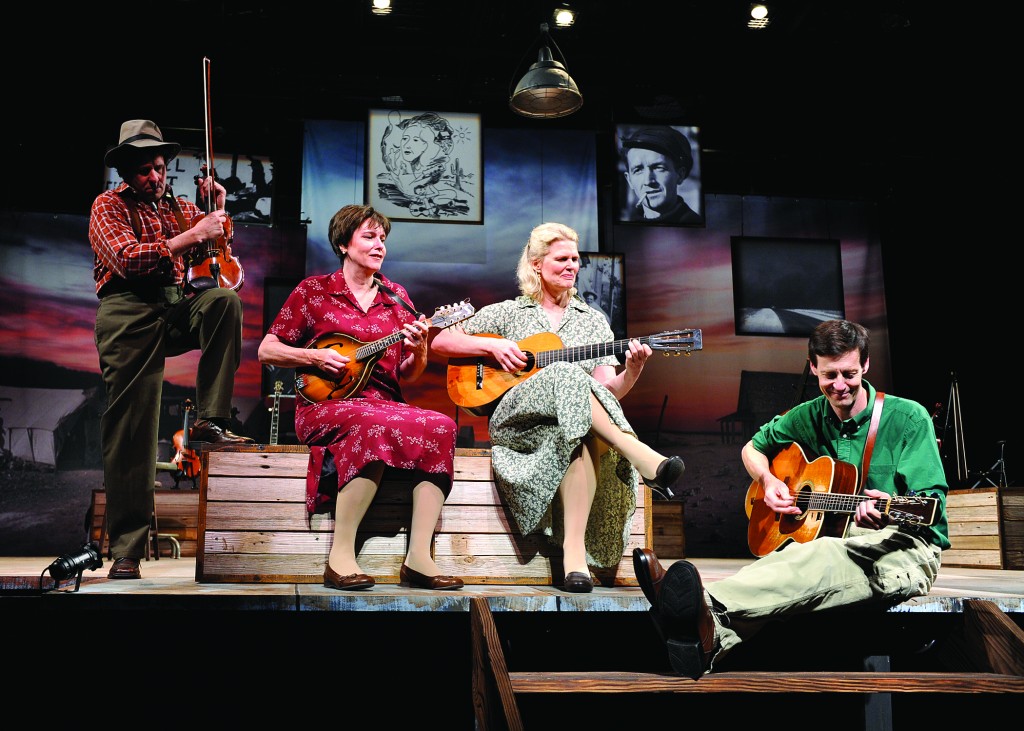 Of course, any musical revue of Woody Guthrie’s work must end with the anthem “This Land Is Your Land.” What the musical revue Woody Sez at Arts Garage does is put that expression of patriotism and brotherhood in a sobering context of Guthrie’s chastening life experiences.

The man who wrote of diverse people forged into a joint identity by the common belief in a grand dream of what we could be, that man had seen crushing poverty far more widespread than even today’s plight; an indifference, even collusion, among the people chosen by us to serve us, and internecine oppression waged with violence.

The song co-opted by middle-class sleepaway camps and truck commercials is a testament to Guthrie’s faith in the promise of America. The song, in fact, the entire 90 minutes of music and storytelling, is testament to the indomitable American spirit, a facile catchphrase today, but which was sorely tested in the Dust Bowl during the Great Depression when adversity had the palpable touch, smell and taste of severe deprivation.

The play frequently quotes the adage, “Everything we do is aimed at going on.”

And it goes without saying that on this, the centenary of his birth, the issues he wrote and sang about have a deafening resonance in these days of class warfare, 99 percenters and Occupy Wall Street. That said, Woody Sez is a rousing and touching production as affable and winning as David M. Lutken who narrates and sings as a stand-in for Guthrie.

He and equally skilled compatriots, David Finch, Megan Loomis and Helen Jean Russell, expertly play an orchestra’s worth of acoustic instruments from harmonica to mandolin, banjo to fiddle, jaw harp to spoons. They deliver more than 25 Guthrie songs illustrating the troubadour’s life and the tumultuous social upheaval he documented in his huge songbook.

The tunes and sentiments resonate for any audience but are guaranteed to strike a chord in an audience of a certain age. At Sunday’s matinee, mesmerized audience members clapped to the music, mouthing the lyrics and finally joining in out loud.

The production values are simple: period clothing, a few backdrops, some wooden crates seeming made out of old boxcar walls. Appropriately, several of the instruments, notably Lutken’s guitar, show the wear and tear of miles on the road.

The 2007 touring revue was booked into the new Theatre at Arts Garage  in Delray Beach by Louis Tyrrell, the former chief at Florida Stage. Tyrrell met Lutken and some of his other collaborators when they performed an earlier Guthrie show at the Manalapan stage in 1993.

The piece created by Lutken, director Nick Corley and others celebrates the populist who said he was writing for “people who have no voice but who are living what I’m singing about.” In this post-modern era of archness where few people wants to get caught dead with genuine emotion, Guthrie’s music is unabashedly forthright about world brotherhood and social justice, embracing unionism and socialism as positive movements towards achieving those ends.

A man sitting at the table with us said, “Folk music, not Walt Whitman, is the poetry of America.” The show goes a long way for making that case with crackerbarrel lyrics like “It’s hard to tumble we’ve you’ve got no to place to fall.”  And there’s the entire six-minute epic “The Ballad of Tom Joad” summarizing Steinbeck’s The Grapes of Wrath that this productions weaves stanza by stanza through the production.

What chokes your throat in this show is the profound pride in being the heir to people who despite struggling with real hardship, still believed in the inherent goodness of their neighbors and saw worth in banding together with them to make a better world for everyone. Pride, and shame at what we sometimes seem to have lost.