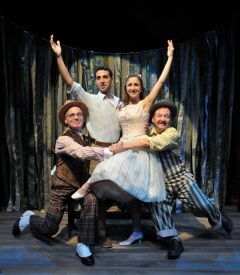 A gentle, compassionate smile at human folly suffuses The Fantasticks when it’s produced as well as Palm Beach Dramaworks has.

Tom Jones and Harvey Schmidt’s classic chamber musical is a refreshing tumbler of iced lemonade on a sweltering night in West Palm Beach, a cocktail of reassuring sweetness spiced with a tang of reproving caution.

Its deceptive simplicity has tricked hundreds of high schools and community theaters into producing mediocre iterations of a truly transcendent piece. Striking the precise tone is dauntingly difficult.

The success is due to director J. Barry Lewis and musical director Craig D. Ames who understand exactly what the authors were going for and have applied everything they know to bring it out. Lewis, known for incisive analysis of complex dramas, invests his skill at detail in lightly adorning this musical with inventive bits of business and stagecraft that freshens the familiar fare. For instance, The Mute toying with the ghost light or the physical comedy of woebegone actors evidence ambitions beyond a rote production.

Ames may be the strongest, unassailable force. He skillfully melded and guided the cast’s vocalizations in rehearsals. As half of the onstage band (with harpist Kay Kemper) Ames’ piano caresses the ineffably gorgeous and idiosyncratic score with its jazzy beats, lush waltzes and glittering glissandos.

Jones’ unabashedly poetical words are as lyrical as Schmidt’s unique music. Both simultaneously celebrate and tease the foibles of fallible human beings. They can be as witty as the fathers bemoaning their children’s willfulness compared to a garden’s reliability in “Plant a Radish,” ranging to the bittersweet rue of the standard “Try to Remember.”

Enraptured by stagecraft, the authors and directors use a mime standing on a chair sprinkling glitter to capture the essence of a rain shower. A long dowel represents a wall erected by the fathers to keep the lovers apart as part of a plot to nudge them together as rebellious conspirators.

With unflagging energy, the entire cast throws itself fearlessly and without a shred of self-consciousness into a tale of sentiment that would curdle at the hint of a wink. When the girl enthuses aloud, “I hug myself ‘til my arms turn blue,” it takes a committed actress to deliver such lines unblinkingly. Most (but not all) of the actors were in sync with Schmidt’s musical rhythms, but the exceptions will likely find the groove within a day or two. Thanks to Lewis, they never lose focus and remain honest in every moment.

Jim Ballard’s smoldering good looks, playful mien, soulful acting and rich baritone make for a charismatic narrator, leader of the troupe and the droll mastermind of the staged abduction of the heroine. He does rush a bit through the poetry of Jones’ reflective soliloquies, but he delivers a sensitive rendition of  “Try to Remember.” Ballard, who was a standout as the agonized progeny in All My Sons last fall, imbues his El Gallo with a world-weary quality of someone who has seen this scenario of tears play out before.

Jennifer Molly Bell, blessed with a delightful soprano that sparks “Much More,” and Jacob Heimer never shy away from the lovers’ intentionally overblown ecstasy and hubris, which makes their harsh comeuppance and reconciliation so effective.  Their sadder-but-wiser duet “They Were You,” is the most touching moment of the evening.

Barry J. Tarallo and Cliff Goulet are well-cast as a pair of baggy pants comedians masquerading as fathers, and save some praise for Cliff Burgess whose rubbery body language and soulful face as The Mute provides a Greek chorus of silent commentary.

The only crime is the joyful highway robbery of every scene by Dennis Creaghan and Tangi Colombel as the bedraggled, over-the-hill actors used by El Gallo as his decrepit supernumeraries. Creaghan’s hammy Shakespearean actor who cannot remember his lines and Colombel as an Indian who specializes in overblown death scenes are an unalloyed delight.

The tone of the evening is unobtrusively enhanced by John Hall’s atmospheric lighting, ranging from the dappled grove before a rainstorm to the harsh exposure of an unforgiving sun.

But the star of the creative team is Brian O’Keefe whose costumes may echo Ed Wittstein’s original off-Broadway designs, but whose choice of fabrics and patterns and colors deliver a convincing sense of whimsy. With a ragged tunic, purple suspenders, a straw boater, brocaded vest, collegiate cardigan, often done up in mismatched checks and plaids, his wardrobe gives you the sense of costumes pulled helter-skelter out of a travelling troupe’s trunk.

To be painfully honest, as El Gallo would want us to be, the enchanting magic that this show is capable of seems just out of reach. There is a more moving, transporting show possible. Watching this production do what it does so well and come so close only makes you yearn for perfection. Maybe that’s asking too much. Perhaps it is having seen the show too many times or loving it so much that no corporeal production can match the one in our heads.

Just a smidgen of alchemy is missing overall, but this superb material gets a first-class production that will take no effort to remember.

2 Responses to Dramaworks’ Fantasticks Is Cool Drink of Summer Lemonade