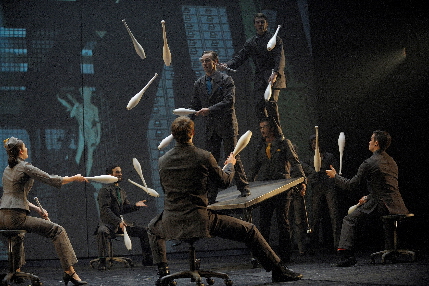 A quiet contemplative moment from Cirkopolis

At an after party inside the Adrienne Arsht Center for the Performing Arts Friday night following the opening of Cirkopolis, the performers brought to mind images of the trunk and greasepaint travelers of yesteryear — the ones who would go from town to town after setting their sights on running away with the circus. But these 21st century sideshowmen and women in the Cirque Éloize bring a whole different sensibility and an immense amount of talent to the modern-day circus. Yet, what they have in common with those ancestors is the determination to thrill audiences with death-defying feats of agility, daredevil tricks and silly clown antics.

Now through July 31, they turn the Arsht Center’s Ziff Ballet Opera House into a three-ring circus on a proscenium stage. The contortionists, acrobatics, jugglers and trapeze artists who we spoke with afterwards brought personal stories about life on the road as a contemporary circus performer: Florence Amar from Quebec City will finish the run in Miami then join a different troupe. Jerome Sordillon, whose abs of steel were as mindblowing as his muscular strength in aerial strap feats, says he’s been on the road with one circus show or another since graduating three years ago from the National Circus School in Montreal. Joel Baker, originally from somewhere in north Florida, spent six years as the Nowhere Man in the Cirque du Soleil show LOVE” on the Las Vegas Strip. He’s a similar Nowhere Man as the clown in Cirkopolis.

The show is a magical and mysterious blend of circus and theater. Existential at its root, Cirkopolis takes on the eternal question of the meaning of life. Creator and co-director Jeannot Painchaud was inspired by Fritz Lang’s Metropolis for his concept story. The opening of Painchaud’s Cirkopolis bears a striking resemblance to the 1927 film. An office worker stuck in the doldrums of an industrial nation is dragged down by monotony. Workers dressed alike in drab grays, walk in sync, piling paperwork upon paperwork on the man’s desk. It almost becomes a rhythmic dance as they go from stage left, stopping in the middle, plunking down the papers, then marching off stage right.  This action continues as loud electronic music blares with an underscore of the tap, tap, tap of a monotonous typewriter.

There are also rumblings of Franz Kafka’s novels in this opening, which Painchaud has mentioned as inspiration, too, where society oppresses people and their dreams.  The program notes say: “In the heart of a stern and imposing city in appearance, giant gears and dark portals symbolize a mechanism that crushes individuality.”

Despite a slow start (the office worker scene rambles on a bit too long), the show blooms with creativity. Video projections (credited to Robert Massicotte and Alexis Laurence) loom large behind the performers in every scene. They are imposing – mechanical gears and three-dimensional buildings that rise and menacingly move from ground level to rooftop then back again.

The original music by Stefan Boucher is meant to be daunting, too (almost too loud at times to be enjoyed). Interesting in its composition, most of it is electronic in nature, much of it mimics the beat of industrial noise. Some of it monochromatic, much of it industrial noise, some sweet (the beautiful “Something Chimes in Me”) and some catchy (the boppy “Tickle Me Home”).

Painchard transitions the industrial office monotony to the breathtaking acrobatic and trapeze scenes by presenting them as a dreamlike escape for the office worker.

In more than a dozen “scenes,” the 12-member cast steps out of their “theater” roles and into the challenging and mesmerizing feats of testing the limits of human possibilities.

A girl in a red dress (Lett) appears alone on the stage, coyly playing with a large metal wheel, the Cyr wheel (named for its inventor Daniel Cyr). She waltzes with the wheel, spinning and swirling it, then creates different acrobatic movements that appear like a beautiful dance.

Another highlight are Boutin and Fournier wowing the crowd, jumping, climbing and balancing each other on a vertical (Chinese) pole. Most impressive is the “flag” feat, where Fournier stands straight out from the pole at a 90-degree angle using nothing but arm strength. The pair climb the pole one on one side, the other on the opposite, then slide down together stopping just short of the floor.

A crowd pleaser, especially for the younger set, is a stage filled with jugglers, led by Urawa. They toss pins in the air, passing them back and forth with sometimes four and five teams all juggling together at one time. It’s mind boggling.

In one of the sweetest scenes, the office worker (Baker), now in a dream, discovers a dress on a hanger, then creates the notion that she is his perfect woman. He courts the figure, wooing her in a fantasy dance, obviously influenced by the footwork of Gene Kelly and wordless expressions of Charlie Chaplin.

In another wonderfully choreographed display, Amar walks on the hands of six suitors, each of them balancing her, and, at one point on the floor creating a man-made bridge for her to navigate. She does so with ease, although the intricacy cannot be denied. Kudos to co-director Dave St-Pierre who is the show’s choreographer.

Saved for almost the very end is the teeterboard, where nearly everyone gets a chance to show off their acrobatic and tumbling skills. Also known as the Korean plank, this is much like the playground seesaw, only don’t try this at home. While one person jumps on one side, the person on the other side is catapulted into the air, where they perform one, two, or three somersaults before landing on their feet.

Speaking of landing on their feet, there wasn’t a safety net to be seen on stage during any of the Cirkopolis feats.

While on a smaller scale than those other shows with Cirque in their name, this high-flying adventure is just as adrenaline fueled. There’s an energy that emanates from the stage and seeps out into the audience. “Cirkopolis” is simply awe inspiring. Ah, the smell of the greasepaint, the roar of the crowd.