The Pursuit Of Dreams At Stage Door’s Broadway Bound 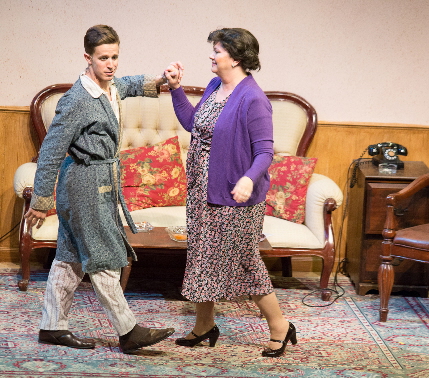 The American Dream is the sanctification of dreams itself. Our very Declaration of Independence exalts the pursuit of happiness, which for many implies lasting supportive loving relationships. But those successful pursuits or, worse, the abandonment of those quests come at a cost. Ask Willy Loman.

Everyone in Broward Stage Door’s production of Neil Simon’s Broadway Bound has or had a dream. But they are at different stages: young brothers hungrily anticipating a future as television comedy writers, an elderly radical whose unrealized dreams have cauterized his emotions, and especially the aging couple whose love has unraveled in part because they never believed that dreams of a more fulfilling life were possible.

Broadway Bound, the last in an autobiographical trilogy about Simon’s growing into manhood, was his turning point in melding wry personality-based humor, witty rimshot lines and deep insights about “being human.” The deftly-crafted script is indeed funny but its unsparingly clear-eyed observations are illustrative and affecting.

Director Michael Leeds and a solid cast embrace and mostly conquer this challenging duality so that the audience is chuckling as required as the Jerome family of Brighton Beach banter crisply. But Stage Door’s patrons also are conscious from time to time that they have been mesmerized as multi-dimensional family secrets have been peeled away like layers of the proverbial onion.

This is not the finest production you’ll ever see of this work. It doesn’t land precisely right, especially as the warring tones collide. But these theater pros deliver a no-excuses-needed effort that works often and effectively and ultimately satisfies.

The story is a 1949 flashback narrated by Simon’s stand-in, Eugene (Kristian Bikic), as he recalls living at home with his older brother Stanley (Alex Salup) as they try to break in as a comedy writing team.

Their father Jack (Peter Librach) is a 55-year-old cloth cutter who instantly gave up any dreams decades ago to ensure that he provided for his family. His hausfrau Kate (Pamela Roza), once a talented amateur ballroom dancer, has willingly submerged herself in the classic mold of a wife and mother, blunting her emotions as she busies herself in the endless duties of keeping a household humming.

Her live-in father Ben (Michael H. Small) is a curmudgeon grumpily succumbing to old age and who remains obsessed with the failed quest to make America a socialist Eden. At some point, he turned inward, estranging himself from his wife who now lives with his other daughter Blanche (Donna Warfield) after Blanche married a man who became wealthy.

As our guide, Eugene smoothly rattles off witticisms to the audience, many of them droll observations about the family’s eccentricities as they go about their routines. Eugene is less self-assured and far more manic working with Stanley as they review the tropes of comedy while laboring to pen an audition script for CBS radio. The affable Bikic who seems to glow from inside is adept at both speeds.

But as the brothers toil in upstairs bedrooms, their parents, grandfather and aunt are confronting each other. They reluctantly reveal uncomfortable truths about the limits of their lives and their relationships. It’s here that the darker Simon really excels as layers of compromises and rationalizations are swept away, especially as Kate pushes Jack to admit whether he has been unfaithful.

The most moving scene occurs between Roza and Bikic as Eugene draws out Kate’s memories of her youth, culminating in their living room recreation of the night she danced with George Raft. You may have seen the scene in the televised clip of the rendition that won Linda Lavin a Tony Award. But watch as Roza’s previously stolid Kate believably comes to life — still a middle-aged woman emotionally bereft by betrayal, but savoring a cherished moment of her youth. Once a mainstay of local stages, Roza’s now rare appearances like this are welcome events.

Roza and Librach are equally persuasive depicting the couple trying to maneuver through betrayal to determine whether, let alone how, to live with cold, cold truths that are more complex and multi-level than they initially seem.

Small has been playing various permutations of the same role for as long as we’ve been watching him (other than his recent atypical turn in Unlikely Heroes). But each time, every time, he delves deeper and deeper into the seamless reality of what would be a caricature in other hands.

Leeds has many talents, but one of our favorite is helping actors develop a level and depth of performance that they don’t achieve with other directors.

A shout out to the voice actors in the boys’ debut script for radio: Ardean Landhuis, Matthew Chizever and Phyllis Spear. Sean McClelland designed the two-level home, made convincing with appropriate furniture and wall hangings.