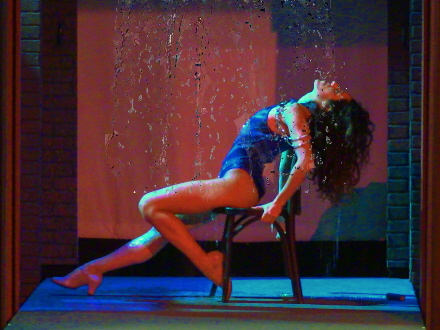 Broward Stage Door’s production of Flashdance the Musical has aspects worth recommending such as two charismatic leads with powerful voices worthy of a brass band.

That’s fortunate because the Stage Door crew is fighting a losing battle with miserable lyrics and a mediocre script awash in crocheted sampler homilies about taking chances, never giving up, believing in yourself, risking it all, finding your true worth, Remember the Alamo, etc. etc. etc. – a cross between a Disney princess movie and a 1980’s self-actualization grocery store paperback if it was written by Norman Vincent Peale and Shirley MacLaine.

If this 2010 stage adaptation is missing the electricity and heart of the 1983 film, it’s not really Stage Door’s fault that this feels like some Broadway producer’s theatrical cynical cash-in (just like the misbegotten Saturday Night Fever and Dirty Dancing). Except that it never made it to Broadway, just touring Europe and the road (it played the Broward Center in 2013).

So be grateful that director Paul O’Donnell and his team (especially Abby Perkins as the steelworker-poledancer and Devon A.A. Norris as the millowner’s compassionate heir) never surrender their commitment to this material whose themes seemed organic and genuine in Adrian Lyne’s film, but here feel schematic and manipulative.

The script parallels the film’s plot, since both are co-written by Tom Hedley, this time with Robert Cary. It’s a blue-collar Cinderella tale in which Cindy rescues herself rather than look to Prince Charming for help.

Alex is a young woman who makes her living as a welder in a dying steel mill in Pittsburgh. But her real love is performing uninhibited dirty dancing on the stage of a downtown nightclub.

Alex dreams of becoming a professional dancer with an idiosyncratic style resembling an athletic riff on Martha Graham and Alvin Ailey. But a crippling home life robbed her of the self-confidence to audition at the local academy despite the encouragement of a lifelong mentor. Her life is upended when Nick, the handsome grandson of the mill owner, hangs out on the shop floor to get familiar with the operation as the front office considers massive personnel cuts. Despite Alex’s crippling reverse snobbery, romance blossoms until Nick’s well-intentioned efforts to help Alex get an audition seems to question her self-reliance. Alex has to decide whether to pursue her dream and still maintain a relationship with Nick.

This scenario rings tinnier and thinner on stage than in the movie, although this version leans heavily on the resonating issue of a collapsing economy and threatened layoffs, as well as Nick’s moral quandary whether to be a hatchet man. The emphasis nearly works, but it feels pulled from a script-writing textbook, just like the placing and character of many of the musical numbers.

Most of the original music among the 27 numbers are by Robbie Roth (no, you’ve never heard of him). They are the generic run of competent ballads and powerbar anthems that sound as if they came from a 1980s jukebox or were rejects from Rock of Ages. In several cases, background soundtrack numbers from the film are turned into Broadway numbers in this version, such as “Maniac” and “Gloria.” But that voltage associated with the genre is absent except on a rousing version of “I Love Rock and Roll.”

The single worst element is the lyrics by Cary and Roth. They aren’t simply cliché-ridden; they’re nothing but an unending procession of clichés. They flatten and cheapen the legitimate emotions by making them feel like the creators are punching the audience’s buttons. Even the rhythm of some words don’t sit cleanly on the notes. Sondheim, this ain’t. Maybe Wilbur Sondheim.

They should be grateful for Perkins and Norris who have strong bottom-of-their-range voices that blast out emotions like cannons on a battleship. The show ratchets up several notches anytime they stop to sing a plaintive introspective ballad about their inner longings.

Perkins, who has been working cruise ships recently, proved herself a A-list singer, actress and dancer in recent seasons as Veronica in Heathers and Mimi in Rent at Slow Burn Theatre. At Wednesday’s matinee, her acting was superior to everyone else on the stage (although you try making something plausible of this script). But her dancing wasn’t as sharp as we’ve seen her execute before, especially in the classic final audition scene. But keep in mind that the film benefited from a stunt dancer and a nimble film editor addicted to jump cuts.

Choreographer Isabelle Trelles does a respectable if not stunning job. Like the stage musical’s original choreographer Sergio Trujillo, she quotes Jeffrey Hornaday’s iconic moves from the film to provide Alex’s terpsichorean vocabulary.

The production has several other scores in the plus column: musical director David Nagy has molded the voices with digitized orchestrations by Manny Schvartzman, Jerry Sturdevant’s parade of skimpy costumes for the young poledancers, and a solid set comprised of faux girders by Jodi Dellaventura and Natalie Torres.

One quick rant: Film and theater are different art forms, obviously. They use different techniques. Sometimes, though, creative folks choose to work in one genre because the story and the characters are best served in one form rather than the other. So, in films in the highly music-reliant Dirty Dancing, Saturday Night Fever and Flashdance, no one stops the narrative flow cold to bleed their heart’s inner agonies aloud in spoken verbiage (nor to have a lengthy cute duet between secondary characters). That’s why D.W. Griffith popularized close ups, so the actors can reveal their thoughts by acting. Blue collar folks central to these musicals are required to make up for that by singing long loud introspective ballads, and it rings false. Jennifer Beals’ and John Travolta’s characters not only wouldn’t break into song, they wouldn’t be self-aware enough to articulate their feelings in a power ballad.