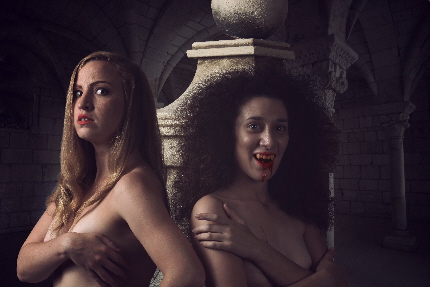 Vera Samuels and Emily Freeman as a couple of weird sisters in Arts Garage’s Cuddles / Photo by Michael B. Lloyd

“Here be monsters” repeatedly warns one of the two weird sisters at the center of the bizarre Gothic horror play Cuddles at Theatre at Arts Garage, but the creatures to beware are much different than the ones referenced by the ancient sea maps.

They’re also much different than what the audience is led to expect as this offbeat piece intentionally changes gears abruptly enough that you can hear the cogs grinding. Is this a dark fairy tale made flesh? Are one or both women vampires? Is this occurring in some alternate universe or perhaps in your own neighborhood? Is the intended vision wildly stylistic or is this more realistic than we realize?

A lot of fans of mainstream theater are going to flatly hate this work and a lot of open-minded patrons are going to struggle for the entire 70 minutes to identify and stay with the groove of this 2011 British work. But there is going to be a crowd, mostly young, mostly fans of comic books and risible slasher movies who will embrace it. All three groups’ reactions are perfectly justified.

But it is safe to say that Cuddles rates as one of the most “out there” plays you will have seen in the past year, more out there than Arts Garage’s rough sexual dance in  Smoke or the disturbed sensibilities of the dollmaker in Reborning or Thinking Cap’s gonzo Map of Virtue and their recent Mud. In an “off-the-wall” competition, Cuddles leaves them in the crypt dust.

Give it this: I left completely confused, unable to assess what I had seen and suspecting that the play or production had been something of a mess. But it stayed with me; the more I thought about it days later, the more its metaphors and internal logic made ever more sense. The script and production have serious flaws, but something worthwhile lurks inside thanks to a total commitment from director Keith Garsson and the two actresses.

It’s going to be hard to avoid spoilers, but here’s the sketchiest description of the premise. (And keep in mind that our perception of the situation changes several times. We become the spectator equivalent of unreliable narrators.)

Eve (Emily Freeman) is a grimy, feral teenager who has been imprisoned in a stone prison cell her entire life. With wide eyes that bespeak prolonged madness, she describes her backstory in terms of a fairy tale.  She believes she is living in a world of princes and dragons.

Enter her jailer, Tabby (Vera Samuels) who is dressed in a business outfit. The young woman appears to be Eve’s older sister who has been protecting her from the outside world in this “safe place” since childhood because Eve is (or is she) a vampire. Doubt it? Eve actually sucks Tabby’s blood. Eve also (metaphor alert) sucks the symbolic life out of Tabby – or at least the chance at a life.

Eve is often hungry. She thinks she yearns for blood, but clearly, as in the 1983 Susan Sarandon film The Hunger, it’s as much for sexual gratification, even though she has no idea what lust is.

Wilde has constructed a detailed complex relationship governed by a score of esoteric quirky rules like memorializing various levels of cuddling and dark references to consequences like “the leash.” Under Eve’s persistent questioning, Tabby says, “If you ask too many questions the ‘why bird’ will peck out your eyes.” There’s a lot of that.

But Tabby, who actually runs a corporation in the outside world, is trying to have a relationship with a man. It’s obvious that trying to maintain both relationships is unlikely and tragedy is coming. And you thought you had caretaker issues.

This woefully fails to describe the vibe, which just gets stranger and stranger. There is a big reveal coming and if you don’t suss it out beforehand, it will turn your head around like the little girl’s in The Exorcist. As Kurtz said, “The horror! The horror!”

Freeman dives without any reservation into this fevered, animalistic girl who you easily believe would sink her teeth in your neck. Eve is so woebegone that it’s impossible not to feel sorry for her. The part is written as someone childlike in her naiveté due to living cut off from the world; yet, clearly she suffers from an imbalance of another sort and you wouldn’t want to be alone with her.

Samuels is less convincing. She starts out the evening at about 9 on an Overwrought Scale of 10. Within a few minutes, she’s at 11 and rarely leaves that point all night. Her Tabby is even more round the bend and over the top and a few other clichés.  She is so nasty (well, wouldn’t you be after 20 plus years of this) that it’s difficult to feel much sympathy for her.

Wilde turns the script in on itself so often that the audience easily gets lost – which may have been the idea, keeping everyone off-balance. Some of his dialogue is carefully honed, but Tabby cannot go more than 37 seconds without uttering some riff on the f-word. Sailors, jocks, college freshmen and the President-elect don’t use it that often.

Again, some patrons will find this an off-putting self-indulgent exercise in extremity for its own sake; but others will find it a fearless exploration of darkness in the human soul that eclipses anything Poe ever posited.