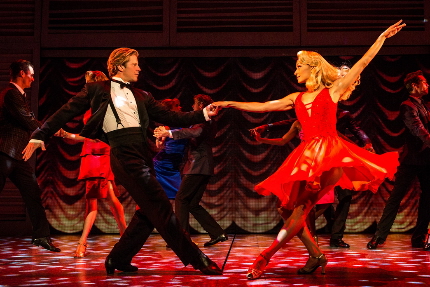 No, this is not Alan Scharf in Dirty Dancing, the musical on tour / Photos by Matthew Murphy

As the orchestra plays the overture just before the curtain goes up on Dirty Dancing – the Classic Story on Stage, Alan Scharf participates in a ritual backstage that happens before each performance. 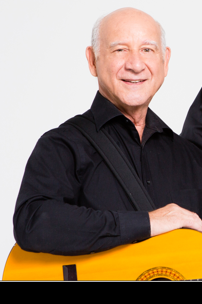 This is Alan Scharf

“I saw these young guys doing pushups and I decided I’d join them,” said the Delray Beach resident, who is touring the country in the musical as the character Mr. Schumacher. “I was able to do 12 pushups when I started in September and I’m up to about 28 now. I’m hoping by the end of the tour to get back to where I was in high school when I could do 60.” Not bad for a 78 year old.

Scharf says he’s enjoying being part of the touring company in the popular movie turned musical, both written by Eleanor Bergstein, author of the original 1987 hit. The actor was surprised when “out of the blue” he was contacted to try out for the show. After moving from Las Vegas to Delray Beach (“my wife and I were sick of brown, we wanted green”) six years ago, Scharf has kept active in his acting and singing career in South Florida – “I’ve done at least 15 commercials since coming here.” Most of the work his agent was getting for him were commercials and some television, including stints on the shot-on-location in Miami television show, Magic City.

His introduction to the latest Dirty Dancing national tour was unexpected. “My agent received a call from the casting director who said she saw my photograph on a website and since I looked just right for the part that I should go to audition in Miami.” He did. Then he got a call back to head to New York for a final audition.

The plot, you may remember, goes something like this: 17-year-old Frances “Baby” Houseman is on summer vacation in New York’s Catskill Mountains with her older sister and parents. Mesmerized by the racy dance moves and pounding rhythms she unearths after being invited into the resort’s staff quarters, Baby can’t wait to be part of the scene. When she catches sight of Johnny Castle, the resort’s sexy dance instructor, Baby’s life changes forever.

This is the third year for the national tour of Dirty Dancing, which this year coincides with the film’s 30th anniversary. Scharf said he didn’t really remember the movie, so he thought it was time to revisit it after he was cast in the stage version. “I noticed that my character doesn’t do much in the film, but in the play the writer increased the size of my role and made it a bit more important. In the film, the character’s wife does all the work, but in the play I don’t have a wife,” said Scharf. In the musical, Mr. Schumacher has a show stopping number in the second act.  “When I sing Besame Mucho, it brings the house down; the crowd goes nuts,” Scharf said proudly.

The touring company is made up of 26 actors, singers and dancers and Scharf says it is the company that has given him the “time of his life” and one of his best experiences in his long acting and singing career. “I enjoy the kids I’m working with in the show. There are about three adults in the show in their 50s, there’s me, and the rest are in their 20s.”

In the beginning of the show, Scharf said, the two main dancers are showing off for the guests at the Kellerman Hotel, where the action takes place. “I’m supposed to, as my character, be in total awe watching them. But I don’t have to do any acting for that. Their dancing is truly unbelievable. I can’t say enough about them. And, it’s a good looking cast, too.”

The actor, who calls his character “the comic relief” of the show is on stage plenty during the two-act musical. “I’ll give you an example,” said Scharf. “I have eight costume changes in the first act, and three in the second.”

The musical, as does the film, takes place in the summer of 1963. It was around that time when Scharf was touring with the folk group The Highwaymen. While not an original member, he said “I joined them in 1965 and worked with them until 1969.” He’s reconnected with another former member of the group – Roy Connors, who lives in Boca Raton. They formed the duo 2 Guys. “We perform up and down the coast of Florida.” They entertain for groups in gated communities, for private parties, and have done a few performances in the amphitheater at Ann Kolb Park in Hollywood.

2 Guys is on hold while Scharf plays theaters across the country. He’s under contract for a year, but hopes Dirty Dancing is just the beginning of more roles on the national tour circuit.

While Scharf is retired from his teaching career, he says he has no plans on taking a break from his singing and acting pursuits. “When you’re in show business, you never actually retire.”

The Arsht Center, along with Broadway Across America and presenting sponsor Bank of America present the Miami premiere of Dirty Dancing – The Classic Story On Stage at the Adrienne Arsht Center for the Performing Arts, Ziff Ballet Opera House, 1300 Biscayne Boulevard, Miami, FL. 33132. Tickets start at $29. For tickets visit www.arshtcenter.org, or call the Box Office at 305.949.6722

This entry was posted in Features and tagged Broadway Across Miami, Dirty Dancing. Bookmark the permalink.