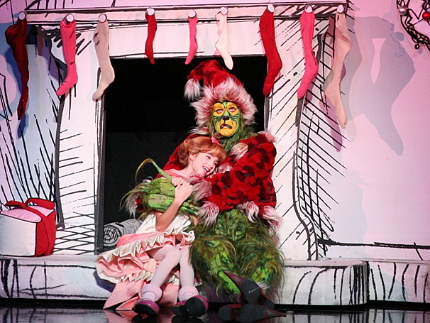 The tour of Dr. Seuss’ How The Grinch Stole Christmas is a reliable litmus test of just how deep into or disaffected you are with the holiday spirit.

This definitively children’s musical with a few sugar plum crumbs thrown to the adults in tow will likely increase the cheery level of those already in a cheery mood and do little to make merry those fighting the holiday blahs. It’s not remotely as effective as It’s A Wonderful Life.

But the cheering of children on opening night at the Broward Center, the sound of their parents and grandparents fearlessly joining in the sing-along of “You’re A Mean One, Mr. Grinch,” and the pep of the crew onstage reinforced that the seasonal tour was indeed delivering some holiday merriment to the multi-generational crowd.

Still, sometimes, it’s a risk when Broadway folks color in with three dimensions and a full palette all the details that were only sketched in like Seuss’ original black-and-white pen drawings; you could fill out the tale with your own imagination in the 1957 book and even the 1966 televised cartoon. So when producers provide live people in funny costumes, no matter how skilled they are, the incarnation robs the original of some of its magic.

But there is a reasonable sackful of talent and polish on display in every category, which makes sense since the musical has played seasonally on Broadway and the road since 2006 with opportunities to touch up and tweak. In fact, Stefan Karl is on his eighth tour of Whoville as the Grinch (he will hit a 500th turn grimacing and prancing this season); Bob Lauder has donned Old Max’s costume for the sixth year; Papa and Mama Who and some ensemble members are also returning vets. But no one appears to be coasting, taking seriously the hopes of the entertaining audiences who might never have seen the show before. This is pretty amazing since they perform four shows on Saturdays.

For the Scrooges in the house, the justifiably venerated Theodor Geisel created the idea of the Grinch, a tall ugly shriveled up creature covered with what looks like diseased asparagus. Harboring a heart two sizes too small, he hates Christmas. With the reluctant help of his woebegone dog Max, he decides to steal all the presents and holiday food from the lovable pink-and-white Munchkins living down the alpine slope in Whoville. Spoiler alert: When the Whos led by little Cindy-Lou Who still celebrate because the holiday spirit has nothing to do with material things, the Grinch is transformed. It’s hard not get a little choked-up as Grinchy’s grouchiness evaporates and he is cuddled by the adorable little Cindy-Lou.

Karl does have every curved arm gesture, every deep grimace and every deliciously curdled growl of the curmudgeonly Grinch down pat, gleefully chewing every bit of scenery on stage. Lauder’s deep baritone but kindly visage make for a welcome narrator as the aged Max. And whichever Cindy-Lou we saw opening night, Genny Gagnon or Rachel Katzke, was winningly adorable.

Mel Marvin’s score with a book and lyrics by Timothy Mason are somewhat charming, along with songs from the cartoon by the late Albert Hague. Director Matt August, who has many credits, is on his 10th round helming Grinch, but he has managed to make it feel as fresh as you can ask for.

Even with Broadway production values, this is still children’s theater, and not for children-of-all-ages. But the Grinch mutters some side swipes for the adult, such as noting while displaying a Christmas feast that one dish is non-gluten.

The truth is that this Grinch lacks Seuss’ divine sense of whimsy, but perhaps the trick is to go with a pre-teen and enjoy the magic vicariously.

This entry was posted in Reviews and tagged Broadway Across America, How The Grinch Stole Christmas. Bookmark the permalink.