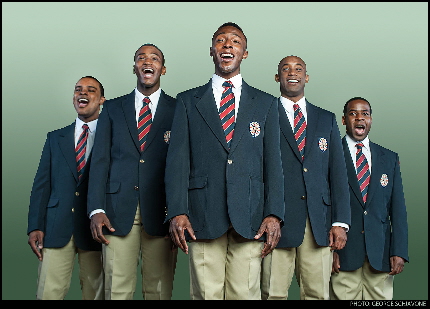 A decidedly gay teenager leading a religious-based choir at a regimented prep school for African-American boys would seem an improbable even impossible situation. But it’s a perfect theatrical metaphor for an individualist struggling to square his uncompromising self into a society built upon conformity.

Immeasurably elevated by thrilling music performed live in five-part harmony, the depiction of this difficult dance is the premise and theme of playwright Tarell Alvin McCraney’s Choir Boy in GableStage’s intriguing production.

Singing tight a cappella harmonies requires not just skill and talent, but a disciplined willingness to smoothly meld with a group with preconceived roles. Success relies not just on harmony in the musical sense but interpersonal/societal sense as well.

This poses a huge test for McCraney’s protagonist, Pharus Jonathan Young. The student at Charles R. Drew Prep School is an unabashedly if celibate homosexual in a Christian private school. More important, the socially inept adolescent is smarter and more talented than everyone around him – and lacks the common sense not to flaunt it in everyone’s face as payback for the scars from institutional homophobia.

How do such structures deal with outliers, and how well do those mavericks deal with society? Not well, McCraney seems to say. Such an insight isn’t news, but McCraney and director Joseph Adler come at those paradigms from a fresh angle

Actor Din Griffin, Adler and McCraney construct a fascinating creature in Pharus. Griffin’s Pharus not only has a slight lisp, but a tendency to let his wrists go limp as he strikes overly-dramatic poses, something his headmaster calls him out on. His seemingly uncensored and outsized ego may mask years of being scorned but he can be borderline obnoxious and is not at all above being manipulative since he thinks his intelligence and talent should trump any issue of sexuality.

Even more important, since Griffin opens the play singing a moldy old school song with an ecstatic passion, beatific expression and expressive tenor, it becomes instantly clear that Pharus is doing what he loves and he knows he is doing it very, very well. Which gives him something to lose.

It’s fascinating that Pharus invokes God’s existence as the rationale for everything. His choir kneels while singing their warm-up hymn. Any problem reconciling his orientation with dogma never comes up. Oddly, McCraney doesn’t have anyone cite gospel to challenge his orientation, just plain ol’ homophobia.

The play tracks Pharus’ senior year and his interactions with four fellow students, the authoritarian headmaster (James Randolph) and a fusty white retired teacher (Peter Haig) who comes back to help the school as it faces financial and academic challenges. Pharus’ ego and sexuality cause rifts and challenges with them all.

The student body is a mixed bag. David (Samuel Enmund) wants to be a preacher, although he does not seem to judge Pharus; he is struggling to keep his grades up because he relies on a full scholarship. Bobby (Melvin Cox) is a relatively sharp street kid who is attending because his father is the headmaster’s brother. His deep dislike of Pharus is as rooted in the classmate’s thoughtless mouthing off as his sexuality. Junior Davis (Vlad Dorson) is Bobby’s sidekick, trying to get along and struggling because he is not especially book smart. Anthony (Datus Puryear) is a sensitive, thoughtful baseball jock who volunteered to be Pharus’ roommate when no one else would do it, in part because of Pharus’ personal generosity.

All have more dimensions exposed in their telephone calls home that reveal situations explaining in part why they are at the school.

McCraney has set these characters inside an insulated crucible of conformity down to the uniforms of blazers, slacks and old school tie, where the school song is entitled “Trust and Obey” and the baldly stated inviolable code of conduct for “a Drew man” is “Don’t lie, don’t snitch.” While Drew Prep closely mirrors upper-crust white bread institutions that would never accept these students, African-American heritage is inescapably part of the school’s fabric. The students hotly debate whether “Negro spirituals” are simply paeans to God’s glory or whether they, as legend has it, contained slaves’ coded messages about escape plans to the North.

McCraney suffuses the play with humor such as when David defends his stance with, “I walk with the Lord,” he’s told, “He didn’t keep the best company. And look what they did to Him.”

The Miami-raised and internationally-renowned author is better known for highly-stylized forays into theater like The Brother/Sister Plays. While Choir Boy is more naturalistic than any of his works previously performed in Florida, the GableStage performances feel more like characters being acted than people.

The other nagging problem is that Pharus does not demonstrably learn anything or change other than be faced with what he already knows – life’s not fair. So while the play structurally begins and ends with graduation ceremonies a year apart, the play has no satisfying thematic or dramaturgical resolution. Perhaps Phatus learns something from an act of kindness near the end of the play, but McCraney never shows the lesson landing on him or changing him.

But it’s not possible to overstate the power and skill of the frequent choral music between scene changes that comment on the meat of the previous scene. The five actors’ vocal gifts have been meticulously blended by local actress Christina Alexander using Jason Michael Webb’s arrangements that intertwine voices like a DNA double-helix reaching for the sky.

Choir Boy is the fourth professional production in his hometown of a script that McCraney wrote or adapted, all of them under GableStage’s aegis (most recently Antony and Cleopatra). The three previous ones were directed by McCraney himself.

Adler’s direction is, as always, almost invisible, yet it is the guiding shaping hand of evening, especially since the playbill indicates that most of the young actors have musical theater experience but not many roles with dramatic demands.

McCraney’s play bowed in 2012 in London and has had subsequent productions in Manhattan, Atlanta and Los Angeles.

After this run, Choir Boy will be played for free for Miami-Dade high school students as part of the theater’s ongoing partnership with the school system and then move to the historically-black Lyric Theater in downtown Miami for free performances underwritten by the county government.