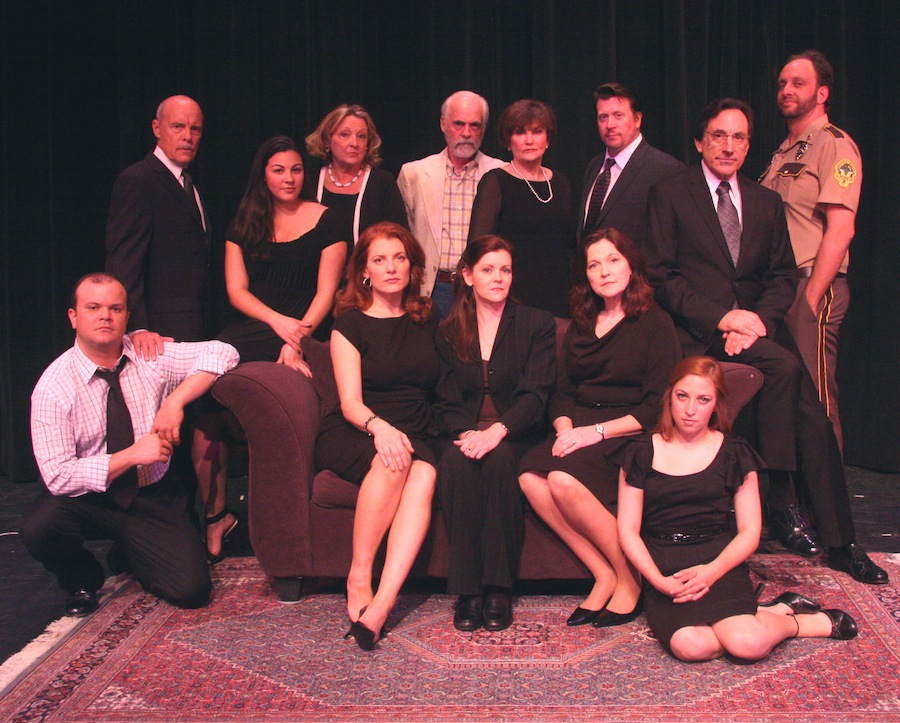 If words were scalpels, the stage of Actors Playhouse would be slick with blood and viscera. After all, who knows better where to aim the blade than our loved ones?

August: Osage County is the epic tragedy of family dysfunction, a coven of damaged souls orbiting around a foul-mouthed pill-popping matriarch who could likely eat Medea alive as an appetizer, but will have settle for blood-kin for the moment.

Running 3 ‘ hours with two intermissions, featuring 13 characters struggling with demons and frustrated dreams, August: Osage County is the Iditarod of contemporary theater. But the Actors’ Playhouse edition Friday night staked its claim as a highlight of one of the best South Florida theater seasons in recent memory.

Playwright Tracy Letts (Bug, Killer Joe and Superior Donuts, which opened the same weekend at GableStage) created a harrowing drama suffused with jet-black comedy. August depicts a death spiral in which familial bonds first disintegrate molecule by molecule, then are ripped apart. It’s filled with more secrets than a week of soap operas, as much angst as a Greek tragedy and could go laugh-for-laugh with a latter day Neil Simon opus.

The Steppenwolf Theatre Company’s landmark production on Broadway in 2007 was nastier, more brutal and less likely to make you feel sorry for anyone, least of all the matriarch who blithely violates every boundary as she numbs her own pain by viciously lashing out at those required to love her.

But what director David Arisco has discovered in Letts’ script is compassion for even the most destructive of these creatures. The mother-from-hell says and does terrible things to her family, but she’s never a monster inflicting pain for sadistic gratification. That takes a little edge out of the play and steals a little bit of its power, but it’s a more palatable spoonful of castor oil for a mass audience.

The play opens in the three-story manse in a small town outside Tulsa. In his study where he writes poetry, the patriarch Beverly (Dennis Creaghan) delivers a drunken, rueful aria to his housekeeper about his toxic marriage. Once his harridan wife, Violet (Annette Miller), staggers in, wasted with drugs, he disappears. Given what will follow, it proves a wise choice.

Violet, fueled by a cornucopia of pharmacology, calls home their three middle-aged daughters, with their spouses or significant others a step or two behind them.

Five days later, the family is reminiscing about the missing father. By turns passive and aggressive, Violet turns her ire on each visitor, exposing ever more family secrets.

There’s the oldest daughter Barbara (Laura Turnbull), a Colorado professor burned out from past campaigns to conquer her mother’s addiction. She has her own struggle grappling with the infidelity of her husband, Bill (David Kwiat), and the disaffected rebellion of her 14-year-old pot-smoking daughter, Jean (Jackie Rivera).

There’s the youngest daughter, Karen (Amy McKenna), a shallow but good-hearted soul who has brought her fianc’ Steve (Stephen G. Anthony) from Miami, a businessman who is not half as perfect as Karen thinks.

There’s the middle daughter, Ivy (Kathryn Lee Johnston), who deeply resents being trapped as her parents’ caregiver and wants to escape with a secret lover. Her self-worth has been crippled because her sacrifice has been cruelly taken for granted. When tragedy strikes, Violet chooses to collapse in the arms of the super-competent Barbara, not Ivy.

Don’t worry. They are all distinct individuals who Letts brings on stage slowly enough for us to keep straight.

The first act closes when Beverly has been found drowned, a likely suicide. From there on, a flash-flood of festering resentments, open wounds and defensible causes for anti-social and near-psychotic behavior all tumble out in screechfests and violence as any pretense of a nuclear unit crumbles. At the end, the family is destroyed and the house is a wasteland.

The play examines whether the bonds of family are as genuine as we have created in our modern mythology. Letts clearly believes that some, but not all, are a self-deluding fiction.

His script is crammed with whip-smart dialogue. Bill corrects Barbara for referring to his young lover as Sissy rather than Cindy. She snaps back, ‘I know her stupid name. At least do me the courtesy of recognizing when I’m demeaning you.’

This is Arisco’s best work in years directing a straight play. He elicits memorable, grounded performances and adds dozens of grace notes. A favorite is when Violet sits down to take a pill, she never closes the bottle ‘ because subconsciously she knows she’s going to succumb to the desire for another and another. Arisco’s years directing musicals and lighter comedies have honed his ability maximize the considerable dark humor here.

But his real triumph is his pacing of three and a half hours. While it doesn’t race by like the Steppenwolf version, it flows smoothly at a near perfect clip ‘ not too quickly to lose the audience, not too slowly to allow anyone to fall asleep. In fact, Arisco, Miller and company start out with a kinder, gentler Weston clan. Therefore, the play has somewhere to grow until the meltdown at the end of Act Two. While Act Three contains the exposure of the worst of the family’s secrets, the revelations and reactions from already-traumatized relatives are like muted aftershocks.

The production elements include Ellis Tillman’s dead-on costumes and Alexander Herrin’s superior sound. Patrick Tennent’s lighting deftly evokes the changing time of day (especially the dark-night-of-the-soul lighting in the study) although it’s difficult to see faces in the attic.

Sean McClelland’s design of the towering suffocating homestead and Gene Seyffer’s execution of it is remarkable for its scope and power. The building has a brooding presence of its own with its decades of paint jobs and wallpaper peeled back, just as Letts is doing with the family

Saving the best for last: There’s not even a mediocre link in the superb cast. Under Arisco’s direction, they provide textbook examples of naturalistic acting. They even weave in Letts’ considerable exposition as if the topics were naturally occurring in conversation.

Top of the list is Miller’s bravura performance. Miller, the sole non-Floridian here, appeared in Actors’ production of Martha Mitchell Calling in 2007. But this is a far more courageous endeavor as she perpetually dances on the edge of caricature but never once falls over despite her Granny Clampett voice. Her grin is childlike one moment, carnivorous the next.

She lurches onto a landing dressed in bright peach pajamas and clomping noisily down the stairs in hard-soled slippers. She waves her ever-present cigarette like a punctuation mark for her slurred sentences. During even her more lucid moments, you can hear the sound of Violet’s mind clawing through decades of fog and debris to seek out an elusive word or memory.

As for Turnbull, locals have been awed by her talent for more than a decade. But even given her recent starring roles, she hasn’t had material this worthy of her since the outraged wife in GableStage’s The Goat, or Who is Sylvia in 2003. She rewards Actors with stellar work in which you never see the gears and levers. She exists inside her character so naturally that it seems like she’s doing nothing, much like Spencer Tracy. Especially impressive is how her Barbara begins as a put-upon working mom who doubts her ability to cope with the crisis, then convincingly evolves into the controlling head of the household, then slides dangerously close to the mania of her mother.

Johnston also hasn’t had a role this worthy of her since GableStage’s Bug in 2004. She makes the most of this opportunity as the reticent daughter whose true character slowly emerges. McKenna, too, inventively depicts Karen’s shallowness including a hilarious near-monologue in which she natters mindlessly to her sister about her life in Florida, barely disguising a desperate self-deceiving need to be loved.

Space limits singling everyone out who deserves it, but special mention is due Bradshaw for creating a Mattie Fae who is laughably self-centered and thoughtlessly cruel. But when her own secret is revealed in the last act, Bradshaw makes us see that Mattie is much a deeper soul than we gave her credit for ‘ which was Letts’ point.

Audiences accustomed to Actors’ family fare should be warned: This is unlike anything the theater has produced in recent years. August is unadulterated adult theater marked by repeated obscenities ‘ both verbal and emotional.

Some plays make you want to call your mother after the curtain falls; this one makes you want to cancel those airline tickets you bought for the next family reunion.