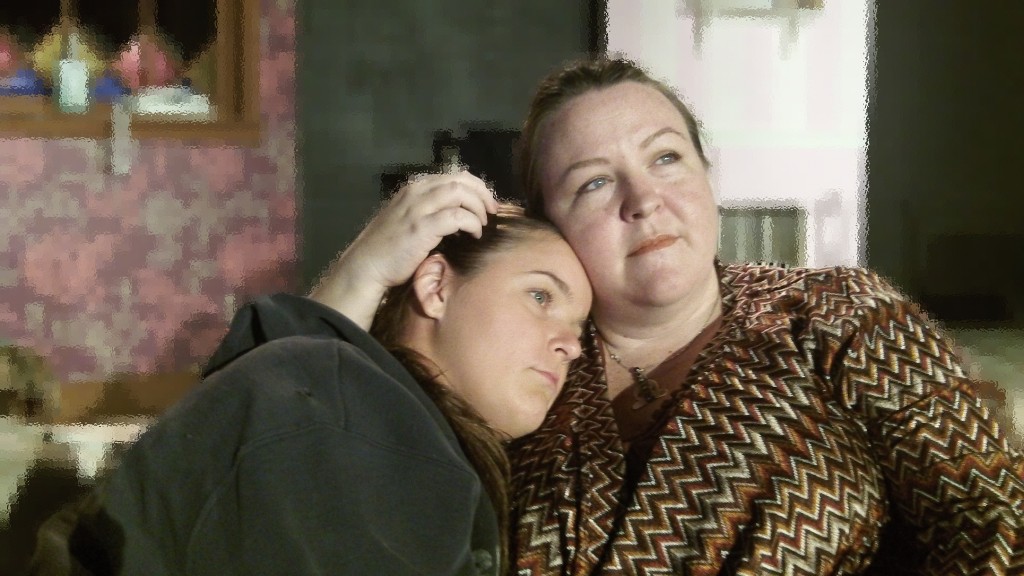 On the surface, David Michael Sirois’ Off Center of Nowhere is what would result if the Neil Simon of the 1970s wrote a rollicking comedy about teen pregnancy, abortion and racism, laced with a lot of profanity.

The Alliance Theatre Lab’s world premiere is sit-com funny until it intentionally slams the audience into a concrete wall that will leave most observers stunned. That’s when you realize Off Center is really about the limits of how far people can bend their moral code for loved ones before breaking. How unconditional is unconditional love?

Director Adalberto Acevedo and his cast seem in perfect sync with Sirois’ double vision; when we’re absorbing a dramatic moment, we realize we were chortling a few seconds earlier.

The premise (it’s hard not to give away too many spoilers) is a sort of 21st Century Guess Who’s Coming to Dinner set in the Brooklyn living room of the middle-class Trotula family, a loving, scrappy collection of Italian Catholics who holler to each other through the walls. The entire family curses like sailors, but draws the line at taking the Lord’s name in vain, usually blocking the imminent violator by pointing to the portrait of Jesus on the wall.

The parents, Paulie, a racist postal worker, and Lucy, a nurturing nurse, are devoted but volatile and voluble. For all their profanity, they are at heart devoutly religious. For all their verbal Honeymooners barbs and normal friction with their teenage daughter, Jackie, the Trotulas seem a solid family unit.

That’s about to be tested. Seventeen-year-old Jackie, a would-be writer of musicals, has secretly been carrying on a love affair with Ronald, a 23-year-old Georgetown grad. Oh, by the way, Ronald is black. And early on, the young couple discover Jackie is pregnant. And she ‘s leaning toward having an abortion.

Of course, the disclosure of these secrets to the parents sets off comic breast-beating but also collisions of conflicting standards that the family has never really faced. That unleashes a parade of revelation after revelation in the last few scenes that might strain credulity if not for Acevedo and his cast digging so deeply into the emotions of the characters.

We’re surmising that the Neil Simon vibe is intentional to contrast with what comes later. For instance, sound designer Howard Ferre has accented scene changes in blackouts with very 1960s songs by Sammy Davis and similar Kennedy Era crooners.

Sirois, Alliance’s resident playwright who penned its successful Brothers Beckett last season, shows an ever-deepening talent with his second produced full-length play. You can quibble that the script could use a nip and tuck here and there. And some may question the likelihood of a blue collar teenager having a love affair with an adult microbiologist. But Sirois has a feel for dramatic structure, insight into interpersonal relations among characters and a gift for slipping a serious theme inside an entertaining comedy.

Above all, he has a talent for dramatic dialogue and witty repartee, and mixing the two in the space a few seconds. For instance, in the middle of an intense debate about whether abortion is the sin of murder, Jackie says, “Catholicism doesn’t keep you from sinning. It just makes you feel bad when you do.”

Lucy: Stop yelling, ya big ape.
Paulie: I’m not yelling. I’m projecting.
Lucy: Well, even when you whisper at church you can be heard by the whole congregation.
Paulie: We need a new church, anyway. Nothin’ but old people in there.
Lucy: We were in there.
Paulie: Lu, without us the average age of the people who go to St. Anne’s are dead.

Sirois is well served by the Alliance’s Artistic Director Acevedo who keeps the intermissionless play barreling along with tight pacing and crisp exchanges among the characters. He only slows the subway express when characters need to have a tender moment or to absorb the latest surprise. He also has the characters underscore their genuine affection with frequent kissing, nuzzles and cuddling that belies their caustic dialogue.

The cast, some drawn from Alliance’s stock company, inject the emotional truth of the situations into every scene, keeping the audience invested in what might have seemed a shallow comedy in the early scenes. Give credit to them all for authentic-sounding Fran Drescher accents that, in time-honored sit-com trope, make any line sound funnier.

Individually, it’s hard to pin down what Breeza Zeller does to make Jackie such a believable teenager, the self-assured sass, the heedless certainty, the underlying affection for her parents, the feeling that she’s the only sane one in the family and being as deeply in love with Ronald as only a 17-year-old can be.

Andy Quiroga has the character most in danger of slipping into sit-com stereotype: the blue-collar father coping with the headaches of raising a teenager. But not for a moment does Quiroga succumb to a cardboard cartoon. Employing an Ed-Harris-does-Brooklyn voice, he makes Paulie’s whipcrack retorts perfectly natural. Jackie may be the protagonist, but Quiroga makes Paulie the fulcrum. He audibly sizzles in a slow burn as he struggles to absorb and accept each secret that tumbles out. More than anyone, Quiroga illustrates how the perception of unshakeable familial love can be shattered by unacknowledged hypocrisy.

We sort of slammed LaVonne Canfield when she played the surreal mother in Alliance’s The House of Yes a few seasons back. But here, she is completely credible and touching as the solid rock of the family – able to face down her husband’s fury yet clearly in love with him, considerable warts and all. Candfield’s depiction of love and trust as Lucy struggles with her daughter’s cascading revelations is as true as anything in the show.

Mcley Lafrance, fresh from Alliance’s Lobby Hero, also has a tough challenge  – what Paulie rightly calls the Sidney Poitier role – but he’s solid and fine throughout, especially in the inevitable dinner scene where he has to cope with Paulie’s escalating provocations.

If you can accept the intentional juxtaposition of breezy family comedy and serious social issues (and some people won’t feel they fit smoothly enough) Off Center of Nowhere will make you chuckle uproariously – until it doesn’t.