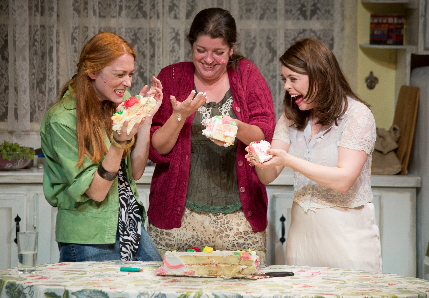 Faiza Cherie, Meredith Bartmon and Ursula Anderman as the three MaGrath sisters in a belated birthday party in Crimes of the Heart at Broward Stage Door / Photos by George Wenztler

The past is too much with us, to misquote Wordsworth. Beth Henley’s Crimes of the Heart urges us to get past our pasts if we are to have some hope for the future.

That homespun homily is delivered with endearing warmth in Broward Stage Door’s production of this 1979-80 comedy performed by a competent cast under Michael Leeds’ sure direction.

This iteration may not land as solidly or squarely as possible, but the company mines the off-beat humor and gentle compassion that earned Henley a Pulitzer Prize for her tale set in the magnolia and molasses world of Hazelhurst, Mississippi.

Henley traces the efforts of the three MaGrath sisters to cope with a succession of discouraging disappointments in life and an accumulation of woes that culminate in what they refer to with genteel understatement as “real bad days.” Always in the background are memories of the “real bad day” years ago when their mother hung herself in the basement – and hung her cat alongside her. It’s exactly that kind of quirky world that Henley has created, populated by slightly eccentric denizens who never fall into caricatures.

The most pressing issue on this “real bad day” is that the youngest sister, Babe MaGrath, has shot her husband who is one of the most powerful men in the county. The reason she gives in a distracted haze: She didn’t like his looks. He’s still alive and looking for blood — or at least to lock up his wife in a mental institution

Meanwhile the family’s anchor, old maid Lenny, is holding down the homestead because their grandfather, who took them in when their father vanished, is now in the hospital. Terribly lonely, this is her 30th birthday but no one seems to notice, leaving her to sit alone at the kitchen table lighting candles with no cake.

Finally, the hedonistic middle sister Meg breezes back into town from Los Angeles where her dream of a singing career has cratered. She left town a few years ago after enticing a young medical student Doc Porter to stay with her in Biloxi as Hurricane Camille struck, leaving him with a limp.

Judgmental cousin Chick Boyle is scandalized and far more worried about how this shooting might affect her social standing than the future of any of the participants.  But lovestruck young defense lawyer, the intense Barnette Lloyd, who has a “personal vendetta” with Babe’s husband, might have found a way to keep Babe out of jail.

They all carry a delightfully blithe sensibility, Babe more than most, taking everything in an anxious but accepting mindset. Meg tells Lenny, “There are plenty of good sane reasons to shoot someone and I’m sure Babe has one.”

All also have secrets in their pasts. Their struggles to escape those misfortunes gives a gravitas to the funny proceedings and oddball characters.

While Henley is teasing the quaint peculiarities of small town America and the last vestiges of the social straitjacket of the Southern society, Crimes of the Heart is a droll and affectionate ribbing – a tone that Leeds has imbued in this production.

At one point, Meg comforts Babe who fears being institutionalized, “Why you’re just as perfectly sane as anyone walking the streets of Hazelhurst, Mississippi.” Exactly.

The mystery is why Crimes of the Heart is rarely revived, when its younger sister Steel Magnolias pops up every two or three years. There’s nothing wrong with Steel Magnolias; it’s a comic, well-constructed, patently manipulative three-hanky tribute to sisterhood that is almost indestructible regardless of who’s presenting it. But Crimes of the Heart is a deeper play, more subtly executed and far more satisfying.

The actors are serviceable, but once again it’s Leeds’ solid leadership that shines. He subtly moves his players around the MaGrath kitchen to keep the play feeling fluid. He adds or allows scores of understated bits of business that may or may not land in the audience’s consciousness but which unconsciously give the production a filled out feeling. For instance, early on Chick rudely changes her stockings in front of Lenny in the kitchen. But she tosses the packaging on the floor, either expecting or not caring whether Lenny will clean up after her. And Lenny does.

Ursula Anderman makes the most of the best-written role as Babe, an other-worldly former debutante whose emotional reaction to everything around her is a walking non sequitur. Faced with prison, she wonders if she can take her new guitar. Accused of an interracial affair that would prejudice a jury on an attempted murder charge, her main concern is whether it would harm the reputation of her teenage lover.

Meredith Bartmon inhabits the love-starved Lenny beautifully, creating a lonely woman who has tragically accepted being taken for granted. But when her sisters empower her, she blossoms like a springtime sprout coming out of the hard winter ground.

Faiza Cherie makes a fine red-haired Meg driven by self-destructive demons whispering in her ear. Clearly loyal to her sisters, Cherie’s Meg regularly hurts people around her with her self-centered and thoughtless choices. But Cherie, Leeds and Henley manage to makes audiences care about her, seeing her external behavior as a product of her inner turmoil.

This entry was posted in Performances, Reviews and tagged Beth Henley, Crimes of the Heart, Faiza Cherie, Meredith Bartmon. Bookmark the permalink.