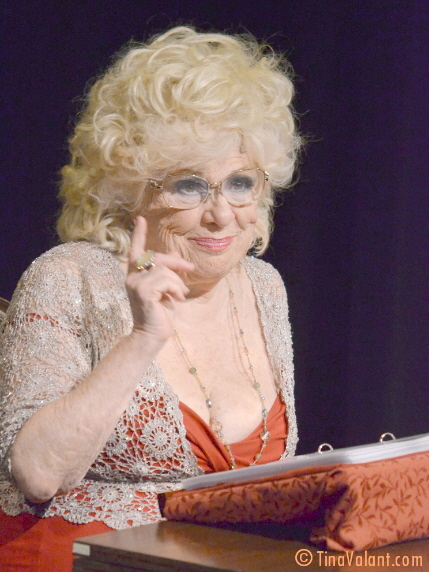 Renée Taylor isn’t a household name, but with everyone she’s hobnobbed with —as an on stage, television and movie actress — you think she would be. Heck, even her husband’s name is familiar – actor Joe Bologna. Taylor’s one-woman show, co-written and directed by Bologna, entitled My Life on a Diet is now at The Plaza Theatre in Manapalan.

There are obstacles that don’t make My Life on a Diet as delicious as it could be as a theater piece. The main drawback is that Taylor sits behind a desk for 90 minutes on a small set positioned stage right that is made to look like a cozy study, an oriental rug, an oriental screen behind her, an antique desk. She reads from the script perched on a small tabletop lectern and kept together in a 3-ring spiral notebook with the pages tucked into laminated dividers. It’s unobtrusive, but definitely there. Taylor, who will be 81 in March, knows the story (it’s a look back at her own 60-year showbiz career), but the printed word is relied upon about 80 percent of the time.

There is a large screen hung on the center back wall of the stage, where slides act as visual aides to her jokes, some photos, some videos, some a listing of funny diets she’s put together based on people’s she’s met.

My Life on a Diet is based on an autobiography/self-help book Taylor wrote, My Life on a Diet, Confessions of a Hollywood Diet Junkie, which was published in 1986. Filled with name dropping and much self-deprecating about her obsession with dieting, the stage outgrowth of the book is a very personal glimpse into a fascinating life.

Taylor has a natural humor and weaves fantastic yarns about falling into enviable jobs on television with Jack Parr and on stage as a comedian at the New York City nightclub Bon Soir in the early 1960s, where she opened for a then unknown Barbra Streisand. She even had a movie part with Jerry Lewis.

She rubbed elbows with Marlon Brando, James Dean and Marilyn Monroe who she met while studying at Lee Strasberg’s Actors Studio in Manhattan. She crossed paths with Joan Crawford and Grace Kelly. She dated Lenny Bruce and a Welshman that she came home to find one day in one of her ladies’ stage costumes.  But what comes through most in My Life On a Diet is Taylor’s curiosities about what people ate, or didn’t eat. She thought if she ate what they ate, she’d look like them.

When she wanted to join Jane Fonda’s workout class, she decided she needed to go on a diet before she joined others in the class who were already perfect. Taylor talks about one of the most famous diet scandals, the Scarsdale diet, making a joke out of the tragedy. Jean Harris shot Dr. Tarnower not because she was jealous of his philandering, but because she was hungry, according to Taylor. There’s plenty of Jewish humor thrown in including a quip about Cary Grant’s love of Hebrew National hot dogs. “To a gentile, a Hebrew National is caviar.”

She also talks about how her food addiction was written into the script of the television show, The Nanny, where she played Fran Drescher’s overbearing Jewish mother, Sylvia Fine. Clips from the television show highlight the food theme and show a younger, heavier Taylor who steals the scenes away from Drescher with her spot-on comic timing. The video clips are a treat, including a lovely reel of Taylor and husband Bologna (the pair were married in 1965 and are happily married today) in a humorous short film created decades ago.

Plaza audience members caught a glimpse of the real Bologna who is usually at the theater with his wife. At the matinee, he joined Taylor on stage during the curtain call.

There’s a point in the show where everything about My Life on a Diet becomes clear. The audience acts as therapist — the stage, the psychiatrist’s couch. When Taylor has her catharsis, she’s drawn the audience in like a famous relative sharing stories around a dining table. “Food and fame. These were my addictions,” she readily admits.

And who can’t relate to that?

My Life on a Diet runs through Feb. 9 at the Plaza Theatre, 262 S. Ocean Blvd., Manalapan. The Ocean bridge is open again. Performances 7:30 p.m. Thursday-Saturday, 2 p.m. Wednesday. Saturday and Sunday. Tickets are $45. For tickets and more information, call (561) 588-1820 or visit ThePlazaTheatre.net.

This entry was posted in Performances, Reviews and tagged Joseph Bologna, My Life On A Diet, Renee Taylor, The Plaza Theatre. Bookmark the permalink.