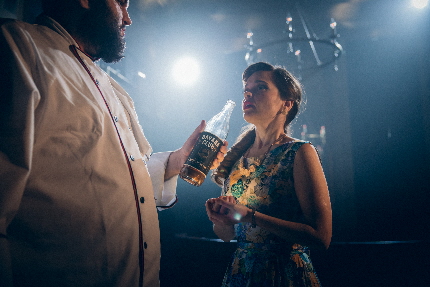 Bertha Leal as the title heroine in Amparo

Its creators acknowledge that the multi-discipline drama Amparo (also known as The Amparo Experience) has quite familiar elements, especially the epic story of a family escaping Cuba and finding success in a new land.

But the way the story is designed to be experienced – and experience is the verb – is to surround and immerse patrons so that they see, hear and feel what the characters are undergoing – thereby making a unique connection even for viewers who are not Cuban-American.

“The story is nothing new to anybody in South Florida or anybody who is Cuban-American,” said playwright Vanessa Garcia, “but what we are doing is putting you inside the story.”

Begun in previews last week, opening Thursday and expected to run until May 31, the story of the Arechabala family – founders of the Havana Club rum empire – is being performed in an old Miami mansion at 221 NE 17th Street.

Garcia and director Victoria Collado – who have teamed up as the Abre Camino Collective — enthusiastically cited the setup of the 90-minute evening repeatedly, although it was obvious that it was something that had to be undergone to understand completely.

The narrative, springs back and forth between 1957 and present-day Miami, tracking how the young woman Amparo weds Ramon Arechabala whose family had created a successful liquor-based business. But Castro’s regime nationalizes and confiscates their business in 1960. The family leaves the country with little but the recipe for Havana Club rum. Castro’s government sell their stolen version as if it invented it, as it does today around the world through a French company — except in the United States.  In 1995, the family joins forces with another Cuban family in exile: their old rival Bacardi. That company – which is helping fund this play – begins producing the “real” Havana Club rum in Puerto Rico and sells it in the U.S. This begins an international legal battle over the Arechabala’s signature product.

About 75 theater patrons divide into five groups with a guide, each representing a narrator’s different point of view of family’s journey. Three of the “presentations” are told mostly in English and two are bilingual. The groups travel on foot through different areas of the house representing different chapters of the story called “heartbeats,” sometimes coming together in a room to experience the same moment in what they call “a spinal cord scene.”

Collado tries to explain: “So this is how we always say this: It’s like going to a party…. If you’re standing over here, standing over there (then) you’ve got a different story because you’re with different people. So just there’s one 1958, one 1959, one 1963 year, continuously moving through the same story through different points of view always connecting together as a group in those spinal cord movements.”

It’s considered “immersive” akin to but not the same as Juggerknot’s successful Miami Motel plays or the famed New York Sleep No More. It’s definitely different than seeing a revival of Hamlet.

“I think that I hope (patrons) should come with zero expectation because it’s not the norm and I hope that they’re willing to go on a ride,” Collado said.

Garcia chimed in. “I think that immersive is obviously like the easiest way to explain it, but that’s not how we like to explain it. We like to call it experience.”

Her director went further, “You are drinking this like … you’re getting something bubbly. There’s these highly stylized moments, sometimes with songs, sometimes with sound.  But those moments are about creating the sensation of the time. We’re messing with eyesight, taste, smell.”

All of this is what they see as the future of American theater, Garcia said. “You’re not a passive member of the audience because I don’t think that kind of theater can exist right now. Passive theater is where you’re just sitting and there is no active participation where the catharsis happens. It is no longer something that we can have as theater right now in this particular moment in time.”

The experience begins even before the play proper. The evening starts with a pre-show cocktail hour offering a free Havana Rum drink specifically crafted to reflect the coming story (You have to be 21 years old to attend). After the play, patrons can hang out longer in a garden and buy more drinks and food.

The play has a cast of 23 actors, two dancers and two musicians, along with a large support crew, which has been retrofitting the existing house to represent the backgrounds of the play—down to authentic Cuban landscaping in the garden. 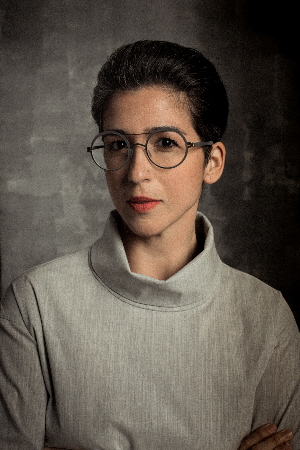 Garcia wrote the play Cuban Spring produced by New Theatre in 2014. She writes in fiction, nonfiction, theatre and journalism. Her novel White Light was one of NPR’s Best Books of 2015. As a feature writer, essayist, and journalist, her work has appeared in the LA Times, The Miami Herald, The Guardian, The Washington Post and other publications. She’s also a WP Lab Fellow. Her plays have been anthologized and produced in Edinburgh, NYC, Amsterdam, Miami, and other cities around the world. She holds a Ph.D. in Creative Nonfiction from the University of California Irvine.

The show has undergone various test “pilots,” involving overhauls each time so that this edition is essentially a world premiere. “One of the wonderful things about doing pieces within unconventional spaces is that the structure tells you how you are going to craft your story,” Collado said. One tryout occurred in 2017 at Little Havana’s Ball & Chain, partially produced by Juggerknot, in which the circular structure sparked the idea of a spinal cord moments. Another was held almost exactly a year ago in a three-story New York City townhouse.

The project is being produced by The Broadway Factor, a company dedicated to promoting diversity and new talent in American theater. Their members have been backers of New York shows such as Anastasia; Natasha, Pierre and the Great Comet of 1812; Kinky Boots; Matilda; Pretty Woman;  Waitress, the off-Broadway musical Unexpected Joy and the recent Broadway play American Son written by Miamian Christopher Demos-Brown. The company’s founders include former South Florida journalists William Fernandez and Deborah Ramirez

Everyone involved has committed their very being to the project in a highly collaborative spirit, the director and playwright stressed.

It may be because the work has the possibility of a deeper mission than strictly entertainment.

“What if you had to leave everything behind and start over again. For 90 minutes, you get to play that game because you’re putting them inside it,” Collado said.

If the audience vicariously experiences the pains and joys viscerally enough, it should resonate with their own families’ history, Collado and Garcia hope. The patrons should be able to relate to “My family left everything behind and we had to start over again,” Collado said.

As a result, Garcia thinks the show can have a future beyond a
audience in South Florida” “The story itself is specific to the Cuban experience, but you can open it up to any refugee, anybody who’s had to leave something to start over again… whether we’re talking about Cuban-Americans or American born anything, American born Chinese-Americans. We want people to say, ‘I get you, the crazy Cuban on a street who still sits at Versailles still talking about what happened 60 years ago. For the first time I understand you.’ ”

She becomes impassioned as she avers, “What we can do is be that bridge generation that that understands our parents and understands how to speak to the place where we’re living.”

This entry was posted in Features and tagged Amparo, The Amparo Experience, Vanessa Garcia, Victoria Collado. Bookmark the permalink.