Miami New Drama Experiments With A Quite Different Our Town 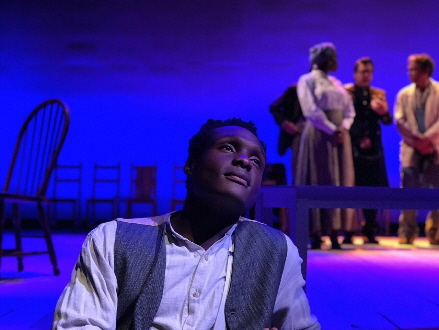 With genuine uncertainty of how successfully it will play out, Miami New Drama artistic director Michel Hausmann keeps calling his unique undertaking “an experiment,” and he’s right to be chary.

He’s mounting the treasured classic Our Town this weekend pretty much intact with one little twist: In his turn-of-the-century New Hampshire village of Grovers Corners, some families speak English, some speak Spanish, some speak Creole.

Armed with the blessing of Thornton Wilder’s estate, Hausmann commissioned Pulitzer-winner Nilo Cruz to translate some of the family banter into Spanish and hired Jeff Augustin to do the same for another family where the first language is Creole.

“I want to do an Our Town that represents our community,” Hausmann said. “I want to prove how global and universal is Thornton Wilder’s Our Town. It’s not about small town America; it’s about the human experience. I also want to prove that the American Dream is universal. If you change the characters and language and what they look like, it still will be an incredible universal story and an American story.”

The bold move, of course, is a reflection of and, he hopes, an attraction to the young, vibrant multi-cultural Miami population, even though the time and place of the play has not been changed.

But it’s a risk, he acknowledges. “It’s an experiment. That’s exciting. You never know how it going to come out.”

Hausmann has been striving to break the local theatrical mold, defy audience expectations and redefine cutting edge theater in Miami with his fledgling company which favors the acronym MiND.

The non-profit theater was conceived in 2013, began officially forming in 2014 and 2015, and then launched its first production in early 2016. Twenty percent of its money comes from Miami Beach and Miami-Dade County, but 80 percent comes from individual donors.

Its mission statement explains its vision: “We are committed to theatrical excellence and theater-making as a means of social engagement, cultural conversation and human interaction. We present world-class work by American, Latin American, and international artists designed for Miami’s unique multicultural 21st century audience. By sharing work where cultures, dialogues, and communities intersect, we aim to reach audiences as diverse as the city itself.”

It set up shop at the Colony Theatre on Lincoln Road, a 465-seat venue that opened in 1935 as a movie theater and which the company now manages for rentals.

MiND’s sparse production history has been eclectic including The Golem Of Havana that depicted life in Cuba for a Jewish family as Castro took power; A Special Day inspired by Ettore Scola’s 1977 film that explored the life-changing encounter between an overworked housewife and a mysterious bachelor, set against the backdrop of rising fascism on the day of Hitler’s 1938 visit to Mussolini’s Italy, and most recently, Terror, a bare bones courtroom drama in which the audience voted on the outcome.

Hausmann spent crucial years as an artist in New York City where he hooked up with major talents like Moises Kaufman, MiND’s artistic associate, and Tony winner Gregory Mosher who directed Terror.

But he was raised and started his career in his native Venezuela. As a result he didn’t stumble onto Our Town in high school English Lit class like so many Americans. “I first encountered Our Town until later in life – a good thing about being an immigrant…. I read it in my thirties and I went, ‘This is one of the best things I ever read’ ” With its deceptive simplicity and profound themes “I always thought it was one of the greatest human achievements.”

An idea germinated. “I was thinking about more than one language coexisting in a play, and I thought how can language tell the story of a play.”

Two years ago, he approached the Wilder estate for permission to attempt the experiment. He obtained a Knight Foundation grant to develop the work.

And then there were the 21st Century resonances that Wilder likely never contemplated.

“Let’s not be blinded by the presidential campaign and this first year in office. The country has been in a very tense relations with immigration” for years as it is now. “And there is this idea that at one point in history, that at one point America was great before” that became a campaign slogan. “Our Town can be mistaken for a play where America was great. A simple life. The play has been produced as nostalgia.” But it’s not meant to be, he said.

“There is a very hungry Hispanic audience, educated recent immigrants” that has not been effectively tapped into and that plays into his vision of MiND’s future, Hausmann said.

“I want to be a major regional theater. That’s my aim. The only way to achieve that is by doing work that appeals to our multi-cultural city. So we’ve always done (plays) where cultures meet like A Special Day or The Golem of Havana where the cast is diverse and reflective of the city.”

He enthused, “Were going to create a new constituency of audience (members), or die trying.”