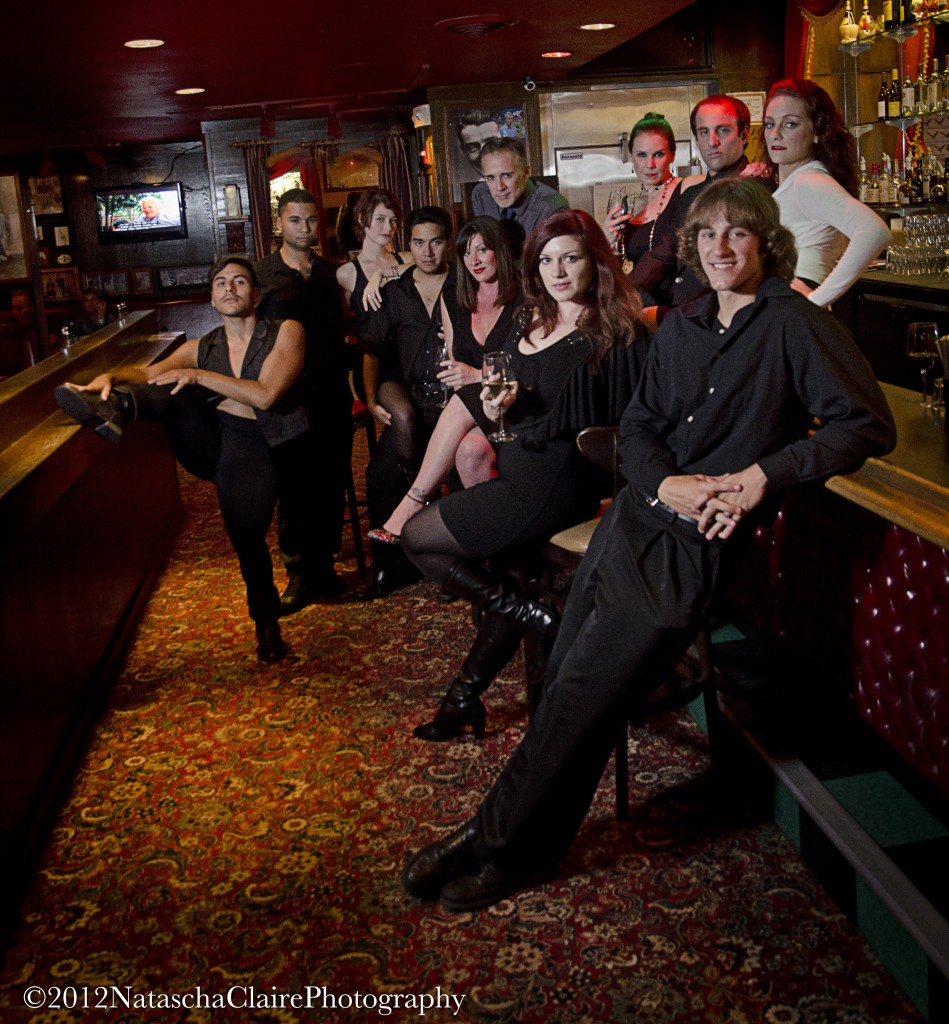 Some troupes ease into existence with a modest, surefire and frugal first full production. Not Outré Theater Company.

South Florida’s newest professional company bows Friday with Andrew Lippa’s The Wild Party. The 2000 off-Broadway cult hit combines a brilliant but edgy Jazz Age score with a jet black story of self-destructive hedonists in the 1920s who indulge in virtually every vice imaginable.

The music is artistically challenging to perform, the piece needs a relatively large cast and band, and this isn’t Andrew Lloyd Webber, let alone Lerner & Loewe.

Outré would have it no other way, said Skye Whitcomb, artistic director and co-founder of the troupe with Managing Director Nori Tecosky.

“We wanted to do something that shows who we are,” Whitcomb said during rehearsal Sunday at the Mizner Park Cultural Arts Studio Theatre that once housed the International Cartoon Museum. “Our set designer, Sean McClelland, said, ‘Go big or go home.”

And they are. Just the size of the personnel roster is staggering: 39 people including 15 actors and 9 band members.

“And this is something we are very proud of: that every person in the company is paid,” Whitcomb said.

Professional pride has been a hallmark of the company since it first surfaced in October 2011 with a series of staged readings and workshop productions to raise seed money.

Outré’s stated mission is “theatre is a living art form with the power to re-imagine and re-examine ourselves and the world around us.  We are a theatre that nurtures the creative spirit of individuals and our community through original and established works, utilizing a variety of mediums to engage the souls and imaginations of the artists and the audience.  We strive to create theatre which stimulates thought, provokes reflection, and encourages activism.”

Whitcomb, a literature teacher at American Heritage School in Plantation, is plugged into the growing South Florida movement to attract younger audiences. “Our biggest difference is we believe that theater should be an active experience, not a passive one. If I pay 90 bucks a month for cable or $15 to go see a movie, then we have to give you something different. It has to be something that engages your soul. We want to bring the audience into active participation.” To that end, The Wild Party will have a VIP section of couches, loveseats and chairs in front of the traditional seating risers. There, actors may bring patrons drinks, sit down next them and involve them in the party atmosphere.

But Outré is also committed to presenting work no other professional company is doing, similar to scrappy youth-trending companies as Slow Burn Theatre company in west Boca Raton and the long-established Mad Cat Theatre in Miami.

Consider its scheduled season:  In April, Outré will feature Avi Hoffman as the poet/storyteller in An Illiad, a modern reimagining of the classic, given a contemporary rewrite by actor Denis O’Hare and Lisa Peterson. Then in the summer, Outré plans to mount tick…tick…BOOM!,  Jonathan Larson’s autobiographical musical that was an artistic triumph for Outré in a staged reading in May with Michael Westrich, Sabrina Lynn Gore and Clay Cartland.

Other than Hoffman, most of the names connected with Outré comprise a tier of surprisingly unsung young and approaching middle-aged theater artists who are only recognized by South Floridians who see a lot of theater in smaller or less well-known venues.  “There are dozens of actors down here who are amazing who aren’t being used by the large companies or are being used in small roles,” Whitcomb said. “We are actively trying to give the actors, designers a chance to say, ‘This is what I can do; let me show you.’ ”

With no money for traditional advertising, Outré is relying on social media and its reputation from four previous readings to build an audience. It even worked word of mouth by holding a Roaring 20s costume ball earlier this month in Wilton Manors.

Pre-planning for the show began in June with conferences by cellphone, email and Skype, including contact with South Florida’s McClelland, Musical Director Kristen Long from Gulf Shores, Choreographer Michelle Petrucci, and Lighting Designer Devon Garbus of Tampa who Whitcomb met in college.

Rehearsals began Oct. 30, mostly evenings and weekends – not an especially long rehearsal time for such a challenging piece.

Based on a 1928 narrative poem, The Wild Party portrays the deeply troubled souls who hold the titular dance-as-fast-as-you-can party marked by bathtub gin, cocaine and sexual couplings of all configurations.  At the center is the deteriorating love affair between the showgirl Queenie (played by Gore) and vaudevillian clown Burrs (Tom Anello), exacerbated by Queenie’s growing attraction to Mr. Black (Mark Brown-Rodriguez) and Queenie’s friend Kate (Christina Groom).

One issue facing Whitcomb is taste, especially in a venue located in the epicenter of ritzy Boca Raton. “We are going to have to walk a fine line.… If this was a movie, it would be PG-13, which is why we are not allowing anyone in under 17 without an adult.” But theater, live and in the flesh and in your face, is different. “The question is how explicit do you get? What’s sexy and what’s offensive?”

The material is in keeping with the edgy feel of the company. During its fund-raising period, the company staged readings of Tom Stoppard’s Rosencrantz and Guildenstern Are Dead and Sam Shepherd’s Buried Child, neither of which was well-received. But it roared back with the acclaimed production of tick…tick…BOOM!,  and a similarly impressive reading of Dog Sees God, the dark satire using salty-mouthed late adolescent versions of the Peanuts characters.

Outré is the brainchild of Whitcomb, Tecosky and their friends. Whitcomb has been acting for 30 years and directing for 20, and was managing director of Savannah Actor’s Theatre and later Alliance Theatre Lab in Miami Lakes. Tecosky, still in her early 20s, is an actress, singer, dancer and native Floridian raised in a large, musical family who studied in New York. She is also a visual artist utilizing mixed media, painting and drawing. Outré’s executive board is composed of Whitcomb, Tecosky, Devin Avery, Jason Evan Fisher, Wayne Robinson Jr. and Erynn Dalton. Its advisory board includes Stephen R. Yaffe, Amy Tecosky, Wendy Sager-Pomerantz,  Jennipher Murphy and Gore.

The Wild Party is a labor of love for all of them, especially Gore. “Somebody introduced me to the show about five years ago when I moved to Florida from New York. I’ve been obsessed with it ever since. I’ve been trying to get every company I’m connected with to do it just so I could audition for Queenie. I’m shameless.”