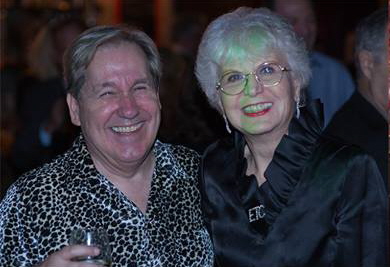 The memorial celebration for Iris Acker will be held Monday at The Wick Theatre in Boca Raton with doors opening at 6:30 p.m. and the celebration starting at  7 p.m.

Playwright, producer and patron Tony Finstrom wrote a piece about his memories of her forged during their relationship. He asked us to publish it.

“Oh, Sebastian, what a lovely summer it’s been.  Just the two of us.  Sebastian and Violet.  Violet and Sebastian.  Just the way it’s always going to be. Oh, we were lucky, my darling, to have one another and need no one else ever.”  – Tennessee Williams’ ‘Suddenly, Last Summer’

I first laid eyes on Iris Acker in the lobby of the Miami Shores Theatre.  It was the mid-1990s, I believe, and a Theatre League party/event was under way.

Was it Christmas?  Who remembers?  But she was behind the bar that night, serving as a bartender.  And, going about her duties, she was cool and professional to this stranger from the north.

Time passed, and Andy Rogow, then Producing Artistic Director of the Hollywood Playhouse, called and asked me to look at a script Iris had given him called Eye Of The Beholder.

The playwright had died, leaving behind a rough first draft of this comedy about the art world that featured a role Iris was right for, and his widow was willing to turn the script over to another writer to get a production up.

I read the play and quite liked it. And I came up with some changes, including an idea for a new ending that was uplifting rather than depressing, and would not leave Acker’s character dead as the curtain falls. Everyone liked that very much, so I got the job.

The show went on at the Hollywood Playhouse the following winter, starring Iris Acker, to mild critical success.  And that was the beginning of our beautiful friendship.

When Arthur died from a malignant melanoma in 2004, Iris’s was the first  condolence telephone call I got.  She urged me to take his place on the Carbonell panel, and pushed for it with the powers that be.

“You’ve got to keep yourself busy at a time like this. You can’t just sit home,” I remember her saying. “Oh, but wait.  ‘Night, Mother  is playing at Palm Beach Dramaworks now. We can’t have you seeing that in your depressed condition.  You’ll come with us to the next show.”

“Us” referred to her beloved husband Phil, whose sudden death in 2010 she never got over. While he still lived, I took some of the pressure off of his theatre going, as Iris and I often went to shows together that Phil happily chose to skip. After his death, we were drawn closer together than ever, as regular Carbonell theatre-going companions.

Off we’d go in my little red VW Beetle convertible to the Maltz Jupiter Theatre or to Actors’ Playhouse or to Broward Stage Door, exchanging local theatre gossip on the trip to the theatre, and arguing over the worth of what we just saw on the way home. What fun we had.

“Backstage before shows, actors would say, ‘Iris and Tony are here’.  Always together!” wrote South Florida actress Elizabeth Dimon in her condolence note sent to me last week.

And “It just won’t be the same not having you and Iris in our Opening Night audience,” wrote Joseph Adler, Producing Artistic Director of GableStage.

We were noticed at these openings, in part, because we often sat front row center due to the fact Iris’s hearing was not good.  We were also noticed because Iris Acker was a celebrated television talk show host covering the arts in South Florida, having spent years at WLRN and more recently at BECON TV, first with her On Stage with Iris Acker show and currently with Spotlight on the Arts.

She never thought of retirement, but instead always stayed current and active in the South Florida theatre scene.  And, thus, always remained recognizable by her theatre comrades and her public alike.

As the years flew by, Iris helped theatre critic Ron Levitt and myself create the Silver Palm Theatre Awards.  She also introduced me to South Florida theatre legend Jan McArt, whose ‘New Play Readings’ series at Boca Raton’s Lynn University aids Florida playwrights in the development of their new plays and musicals.  I soon joined McArt’s team as associate producer, where I work to this day.

That is to say Iris played a very important part in my integration into South Florida theatre life.

We had two things in common that strengthened our friendship as time went on: We were both extremely private people, and we both had very little interest in anything else but Show Business.

I never tired of listening to her recollections of her career in New York and South Florida, and she loved me for that. “I was a ‘Roxyette’,” she used to say.  “Not a ‘Rockette’.  I worked at the Roxy, not Radio City Music Hall.”  And her early career included dancing in the chorus of several nightclub revues. I don’t think most people know she always thought of herself as a dancer first, and dance was her first great love.

Where we differed?  She kept her daily calendar as full as possible, typically taking a yoga class in the morning, going to her book club in the afternoon, and seeing a play that evening. I find it difficult to do more than one thing a day. She was also a telephone person. I am not, and only a very few very close friends dare to call me just to chat. Of course, Iris called daily, at 5:30 p.m., to catch up on the adventures of the day and to plan ahead for what regional theatre openings we might want to catch in the near future.

We also differed in our sense of style.  What an odd couple we must’ve made, as Iris was always impeccably groomed, wearing beautiful clothes and jewelry, while I was strictly a shorts and polo shirt kinda guy. Politically, however, we were both staunch liberal Democrats, thank God, or we would’ve killed each other over the current politics of the day.

She was very private about her illness, and wanted nobody to know about it.  But she was a wonderful adviser to me, in terms of dealing with my illness. When first diagnosed, I was ready to immediately retire from the Carbonell panel, Jan McArt’s New Play Readings series, and anything else I had committed my time and energy to. But Iris convinced me not to withdraw from the world so quickly, saying “You learn to live with cancer. And you may live for years and years in relatively good health, with your cancer.”

She was living proof, having lived a full and crazy busy life the last six years with her cancer, most recently including a tour of the British Isles in August.

In the six years since her first diagnosis, she had never undergone chemotherapy or radiation to treat her cancer, and she was a little nervous about this upcoming treatment.  But her doctors seemed optimistic about what was to come, and so off I flew to La Guardia Airport to the Big Apple, to Broadway!  On Tuesday, 9/11.
I would return to South Florida the following week, and we would, at last, have my birthday lunch where she would give me my belated gift, for she had been in London on my birthday and promised to bring me back a present from over there that was theatre-related.

Her operation was to be at Aventura Hospital on Thursday, September 13th, and she would give me a call in New York on the weekend to let me know how everything went.

But that call never came, and on the following Monday morning I heard from playwright/actor Michael McKeever. “Michael, call Iris and find out what’s going on,” I pleaded.  “I’m getting worried and I’m afraid to call.” A few minutes later he phoned back with the dreaded news.

She had died on Sunday, September 16th, from cardiac arrest.  But Iris’s son Mitch was on vacation in Indonesia, and the hospital was not going to release news of her death until the family had been properly notified.  So we were now under sworn secrecy until the following day when Mitch was finally tracked down and social media exploded with the news.

“You have to plan my memorial,” Iris always used to say, only half-joking.  “You and Mitch.” And so – not even having digested word of her death yet – I began to put a team together at once who would help me produce her memorial, and I laid out a first-draft structure for a celebration of her life.

“You’ve got to keep yourself busy at a time like this,” I could hear her say. Unfortunately the radiation treatment I had undergone prior to my New York trip did not get the job done, and my doctors insisted I go into Holy Cross Hospital on Friday, September 21st, where I then had an operation to remove the tumor from my spine on the following Wednesday. I have been there ever since.

In fact, I write this rambling memoir from a hospital bed in their intensive rehab center, where I hope to be released in time to attend Iris’s upcoming memorial; a memorial that has been beautifully put together by that team I recruited the day after I first learned of her death.

Meanwhile, a small photo of the two of us sits on my tray table, taken (I think) at the very first 24-Hour Theatre Project we attended at Naked Stage many years ago.  I look very young in this picture, but Iris looks the same; always lovely, in a dignified, mature way, sporting a warm, winning smile.

We never had a chance to say goodbye.  Maybe I can do that at The Wick Theatre this Monday evening, October 15th, at 7:00 PM.

You’re invited! It’s going to be a celebration of her life, which is exactly what she wanted, featuring reminiscences and performances by some of South Florida’s finest talent, singing songs from shows she was closely identified with during her long career.

I hope to see you there, but if I don’t make it, you’ll understand.  I know she would.

And I’d probably just be a mess of tears anyway.

This entry was posted in Features and tagged Iris Acker, Tony Finstrom. Bookmark the permalink.