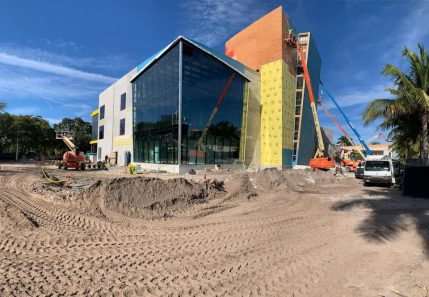 Described as two CAT5 hurricanes striking at the same time, the Covid spike has dealt the Maltz Jupiter Theatre serious blows including cancelling one big-budget musical Sweet Charity because the opening of its highly-anticipated remodeled theater has been delayed.

The $36 million expansion and major upgrade of the theater had been expected to be ready well before the opening of Sweet Charity slated for Feb. 19. But in recent weeks, the construction manager told theater leaders that it more likely will be mid to late February before anyone can move in, although that could change, said Andrew Kato, producing artistic director/chief executive.

The delay comes as numerous other local theaters in the region have cancelled performances and postponed opening nights a week, a month, a year. Indeed, Riverside Theatre in Vero Beach shuttered its highly lauded production of Carousel mid-run and announced Tuesday that it was cancelling four future productions before planning to resume with the season closer in May.

Read details of the situation across the region from Vero Beach to Miami in last Saturday’s article by clicking here.

The Maltz still plans to open its second scheduled show of the season, the comedy I Hate Hamlet, on Feb. 8 in the auditorium of the Benjamin School in Palm Beach Gardens as always was planned. The season closer, the musical comedy Dirty Rotten Scoundrels, is slated to remain on schedule and inaugurate the new facility March 22.

Kato, who has led the theater’s widely-admired growth for 16 years, was confident the theater will carry on, but he admitted being shaken by the unprecedented procession of problem besides just these. “It’s rough,” he said.

“Theater has historically brought together a group of resourceful, creative thinkers who know how to pivot,” he wrote in a Facebook posting. “The age-old saying, ‘The show must go on’ is in our DNA, and we are doing everything in our power to move forward in a careful, mindful, and responsible way.”

The Maltz with its pre-pandemic $8 million annual operating budget and years of saved donations in reserves is one of the most fiscally stable operations the region. But the loss of income of half its mainstage season is profound. Shows like these cost about $700,000 to $750,000 to produce and the Maltz had already hired casts, designers, created costumes and fully built some sets. It echoed March 2020, when its large-scale How to Succeed in Business Without Really Trying closed after its first preview. The company was on the hook to return for $620,000 in ticket sales if all patrons demanded it, but also had $560,000 invested to produce the production.

“As many can imagine, these cancellations are devastating for cultural not-for-profit organizations like ours, so donations are important as we continue to struggle through this shifting landscape,” Kato wrote in a release.

On balance, besides its reserve, the Maltz, like most area non-profit arts organizations, received some help from federal PPE loans and Shuttered Venue grants.

But as they did in 2020, leaders hope that subscribers will donate the money represented by the lost tickets, as many of them did when Covid first shut down the season two years ago. The theater long has had one of the largest subscription audiences in the regional theaters across the country, 8,200 at one time. Recently, the prospective subscriber tally for the coming season was about 6,100.

Besides the manpower and supply problems, the Maltz leadership wrestled with the same Covid concerns that have crippled a dozen local theaters as well shuttering productions across Broadway, Washington, D.C., Los Angeles and Chicago.

At its crux, theaters taking extraordinary preventative issues such as testing everybody that even ventures backstage two or three times a week have increasingly identified new cases, many of them asymptomatic.

But large-cast productions – unlike the small cast of I Hate Hamlet – multiply the likelihood of a single case crippling a production. Even having swings and understudies as the Maltz does is no guarantee; the Actors Equity union holds that if a certain number of people in a show test positive, the production must be shut down, Kato said. Any such possibility would be prohibitively costly.

“So, it’s just a numbers game. Then just do the math like you enter into contracts knowing that you’ll likely be shut down,” Kato said.

“Because of the easily transmissible variant, and the Actors’ Union rigorous COVID testing requirements, more and more actors, musicians and crew are testing positive. That, of course, means that the affected individuals must quarantine for 5 or more days, which means the theater can’t know from one day to the next if the show can go on,” according to a news release quoting Producing Artistic Director/CEO Allen D. Cornell and Managing Director/COO Jon R. Moses.

Oscar Sales, Jr., marketing director, wrote, “As you can imagine, the uncertainty of performers actually performing was large. While we were very fortunate that none of the actors on stage got sick, this past weekend one quarter of our musicians tested positive, including our music director. Riverside works hard to present the most professional productions possible and having ‘fill-ins’ is not an option…. As a producing theatre that brings performers and musicians from around the country, it would have been very difficult having the casts of the other shows concurrently on campus since they would have been arriving this week and within the next 4-5 weeks.”

BIT BY BIT PUTTING IT TOGETHER

The Maltz construction project was a major source of pride expanding its stage to be logistically able to handle Broadway-sized tryout productions, plus an enlarged conservatory for students, a redesigned lobby with a new café and a three-story tall bank of windows.

Detailed regular progress reports initially showed no serious problems with the project that was expected to open in January. But then a shortage of workmen on site and the delays in delivery of material grew to disabling levels until their ultimate effect became clear about two weeks ago.

At that point, the contractors spoke with their subcontractors who acknowledged a domino effect. “Everything piles on. If one thing goes late, then it delays other things,” Kato said.

Even when the company can take occupancy of the building, the city inspectors and fire inspectors need to sign off on the work before the Maltz can get a certificate of occupancy deeming the structure safe.

The Jersey Boys situation was only slightly different, but involved supply chain issues as well. As early as last summer, the Maltz leaders made clear that the show would be mounted on a platform stage inside the Roger Dean Chevrolet baseball stadium in Jupiter, opening Jan.11, 2022.

“We were building an outdoor structure that was pretty complicated. And the number one issue was getting (logistics) in order for us to build out on property that’s not ours,” Kato said. “We had to have a construction manager and engineers sign off on the build because there’s wind loads and stuff like that that have to be met. And the clock was ticking down to get those approvals. So we had to hire (another) engineer just for that project…. And then trying to (find and hire) vendors” for many facets from rigging to generators.

“There is just a multitude (of problems occurring). It was very complicated. And then having supply chain issues on top of that, which was driving up costs. By the time we canceled, the show was already contracted (with performers). The actors were coming in. One was even here.”

But there have been some rays of light. “I think what we’ve learned is a tremendous amount of grace (exists) through this process. I think that’s a word that keeps coming back. I have found people to be enormously generous of spirit. I’ll give you an example. Our drummer who played two (previous) productions, just bought the theater a new drum set. There’s been so many lovely things that have happened.”

When the theater contacted patrons in the abbreviated spring 2020 season, about 21 percent volunteered to just donate the cost of the tickets to the theater and not request a refund as they could have. That figure is about 17 percent for the current situation, Kato said.

Patrons cannot cancel their season subscription since two shows will be produced, but the prorated cost of the lost shows will be returned if requested. The Maltz leaders hope people will either donate that figure or accept “house credit” for future shows.

Beside Sweet Charity, the situation has cancelled the limited engagement shows, The McCartney Years (February 11) and Destination Motown (two concerts on February 13). Other limited engagement performances will be rescheduled: Live at the Garden: The Music of Billy Joel (February 10) and Top of the World: A Carpenters Tribute (February 12).

Kato stressed that the effect is broader than just shuttered shows. “You know what people don’t realize, though, is like when the arts shut down, then all of that economic activity that we generate shuts down, all the restaurants, all of the money, the engine that we create for spending goes away.”

Like other producers across the country, he is hoping that as time passes the worst of the spike will evaporate. “Maybe by the beginning of March, people will be just wanting to get out…. This can’t go on forever.”