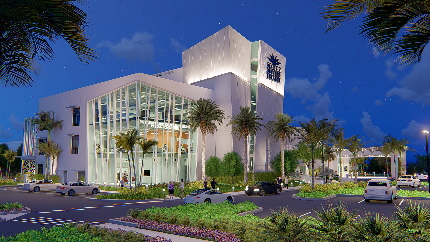 Across this country, most theaters are cautiously limiting their vulnerability to the economic savagery of the pandemic’s threat to their future, cutting staff and programs, cancelling seasons. But the Maltz Jupiter Theater – while similarly reducing its exposure—is doubling down on the future.

One of the state’s pillars of theater has sped up its long-planned $30-plus million expansion project. Contractors are set to break ground on the next phase in three weeks instead of delaying it until April 2021 as was scheduled – ripping out the back and side f its main building, expanding its performing area and conservatory, and adding a three-story production center.

That requires postponing its entire 2020-21 season a full year, now re-slated to bow in October 2021, and operating a significantly more modest operation offsite.

In the meantime and going forward, leaders hope to raise the balance of funds needed for the rest of the multi-phase project. After the new section is operational, the following two phases might be coalesced, finances permitting: expanding its conservatory’s infrastructure, building a VIP café and constructing a 199-seat black box venue for less traditional fare than the mainstream titles the theater currently favors.

All of this aims to further the Maltz leadership’s longtime dream of becoming a nationally-recognized regional theater akin to the LaJolla Playhouse in California or the Goodman Theatre in Chicago, a place where Broadway-bound work can be nurtured and birthed.

“Our art and culture is struggling right now and we are taking this situation seriously,” said Producing Artistic Director and Chief Executive Andrew Kato.
“We want to come out of this with something that has value. We wouldn’t want our actions in this difficult time to be misunderstood (or thought to be) irresponsible. We truly are trying to turn a bad situation into an opportunity.”

The timing is a calculated tactic: Before this, the plan had been to hold the upcoming ‘20-21 season at another venue in the region while the staff worked at yet another site – as they are doing now. It would still have not started construction until later in 2021.

But most theaters in the country realize that they likely cannot open until early 2021 if they are lucky, more likely the spring. Even then, government-imposed distancing requirements may make early productions fiscally unfeasible. And that’s assuming that older audience members will feel comfortable attending as the country begins the struggles to contain the virus. As a result, the Maltz is taking advantage of unavoidable down time to slate the construction that would pose several challenges.

The likelihood of performances with full audiences “will be better in 15 months, not three, four or five,” Kato said of the complexities. “It’s not for the faint of heart. Yeah, it is literally bouncing around and it’s like being on a flight with a lot of turbulence. You can’t wait for that smoother air.”

The first phase about to begin will significantly enlarge its “producing area” in an L-shaped footprint from the proscenium backward through the rehearsal hall and shops, and under the stage. It’s current shallow performing space makes it difficult if not impossible to realize the company’s dream of “producing the next Broadway-bound play or musical right here.” The phase will include three floors of state-of-the-art production facilities with floor-to-ceiling glass windows.

Then, theoretically in October of 2021 as performances resume, work will continue to two conflated phases, saving perhaps $3 million to $4 million. That would upgrade the utilities for the conservatory, create the dining area and the black box But that work might not start until the summer. Those projects might not be completed and operational until 2022 or 2023.

A key issue is marketing because the project still needs to raise $2 million to $5 million to complete the later phases, he said. About $30 million has been raised so far.

The Maltz has been deep into raising money for about five years, but the shift in the construction timetable began three months ago “as the realization was that we were not going to have a season this year, understanding that that was probably inevitable,” Kato said. The project had already kicked off the work with a major overhaul to its parking area prior to the last season.

The company is famous for its organized, disciplined corporate approach to running a theater complex. But the project itself and hastening the logistics challenged their initial skill set. “Never in a million years did I think that I would be learning how to build buildings let alone a $30 million building,” Kato said. But the complexities were familiar. “It’s a little bit like theater; you’re managing objectives the same way. It’s just a skill set that you never anticipated you were going to be in.”

Like most theaters, the Maltz has worked to slim down its $8 million operating budget as much as 80 percent, including furloughing about two-thirds of its staff. Some of those employees have worked there for a decade and their departure has been painful for both sides of the equation. Given the long layoff, the officials said they will not be surprised if many take other permanent jobs. The theater – which has one of most successful fund-raising operations in the state – also has reserve funds that can be tapped for operations in an emergency.

Also like most other theaters, the Maltz is asking its subscription base—one of the largest in the country at more than 8,250 people– to either donate the money spent on tickets in tax deductible grants or to hang on for a year when their existing seats will be held for them.

But operational efficiencies have little to do with the construction project being paid for with capital funds.

The proposed 21-22 season includes some titles being held over and some new.