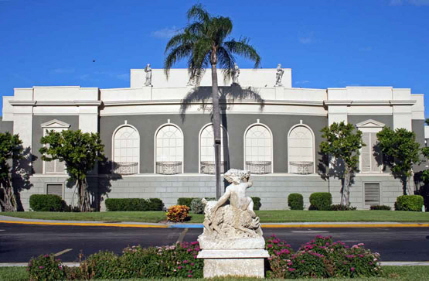 The Royal Poinciana Playhouse may yet rise again as a professional regional theater. A non-profit group known for its youth programs signed a long-term lease with the property’s landlord, according to the group’s producing artistic director.

The refurbished landmark building in the Royal Poinciana Plaza would offer both adult general audience fare as well as arts education programs for children, she said.

NAI inked a 22-year-lease with a 20-year-option this week with Sterling Palm Beach LLC, the developer of the commercial shopping center hugging the east side of the Intracoastal, said NAI spokesman Marty Rogol.

Poindexter, who has been a producer and theater manager in Miami, New York and Europe, was jazzed about the prospect: “Our excitement really is to bring that theater back to life.”

Many details including timelines and the cost of renovations are still being determined, Poindexter said. “That gets tricky for us. Even though we’ve gone through our process, the business plan is always updating itself as we learn more. That’s why we are being careful about what we say,” she said.

The lease includes the Celebrity Room and its club with its picture windows “to offer waterfront dining for founders and patrons,” a news release stated. The Hibel Building, formerly an artist’s quarters adjacent to the playhouse, will house administrative and fundraising offices for operations that are already underway and which will be in full swing before the end of the year, Poindexter said. “We will put our fund raising in place very quickly,” she said.

But NAI likely will have neighbors. The news release quoted Sterling partner Adam Munder referring to NAI as “anchor tenant.”

A separate press statement last March read, “There will no longer be a need to cross the bridge to enjoy a variety of productions and celebrities.  Additionally, NAI will bring Palm Beach to the intersection of the most advanced arts technology within the performing arts industry including for theater and education to benefit audiences as well as our young future stars.”

Rogol acknowledged that Sterling – NAI’s landlord – has pledged $1 million toward an unspecified and undisclosed purpose.

The 878-seat theater opened in 1957, designed by noted architect John Volk in a Regency style. During the next quarter-century, it became a gleaming cultural hub hosting thousands of celebrity-studded road shows and special events. But it has been empty since 2004. The economics of running the house are challenging: far too big for locally-based theater troupes to make a profit and a shade too small to attract blockbuster national tours.

After the structure closed, a series of developers floated plans to tear it down in favor of various commercial undertakings. Sterling hoped to build a 350-seat theater on the site as well as 30 luxury condos, preserving only the playhouse’s façade. But the town council and some residents objected.

While it has been shuttered, accounts have conflicted about how badly the building has deteriorated. Renovation estimates have been quoted ranging between $4 million and $15 million. NAI now plans extensive renovations including replacing much of the backstage equipment as well as the lighting and sound systems in the auditorium itself, Poindexter said. Some ideas for renovations might require approval from government agencies.

“It’s a 55-year-old theater; there are things that need to be accomplished. We’re still evaluating all those items and this is where we don’t have complete answers,” Poindexter said.

The property has been the focus of a lengthy and complex battle, sometimes in court filings, among Sterling and other developers, the Palm Beach Town Council, the Landmark Preservation Commission, former playhouse patrons and other parties. A key problem has been the concern of some residents that Sterling would not develop the playhouse as a theatrical venue. They argued that a 1979 property use agreement between the town and the previous owner requires them to maintain theatrical activity on the site.

The National Arts Institute is a Palm Beach-based non-profit organization founded in 2008 by philanthropist Kenneth Ohrstrom. He, Poindexter and others later involved in NAI had served on the G-Star Arts and Education Foundation, a kind of booster organization for the G-Star School of the Arts in West Palm Beach. But they created NAI to expand their activities. Today, NAI’s stated mission is “serving youth, arts and education through career-based arts programs.” Its website cites programs “from arts science in our Studio Research Laboratory to building Arts Masters beginning in childhood and growing throughout life.” To read more about their projects, visit: http://nationalartsinstitute.org/category/recent-news/