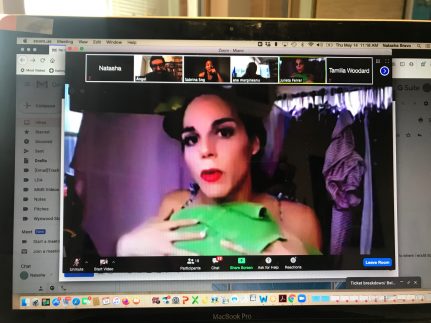 All the world’s a stage, in the case of Long Distance Affair, literally. Sitting in your living room in South Florida late this month, theater fans will be able to watch short plays beamed to them from Singapore, London, Paris, Madrid, New York City, and, oh, yes, Miami in an innovative experimental paradigm.

The Miami-based Juggerknot Theatre Company, responsible for the immersive Miami Motel Stories series, and the boundary-busting PopUp Theatrics in New York have creates an original if slightly complicated online presentational concept that includes the ability of the audience to talk to the performers during the performance.

“I really feel that it’s the ability to capture an audience in a different way and feel like you’re having a real moment with someone else,” said Tanya Bravo, founder and executive artistic director of Juggerknot.

To oversimplify a bit, a patron buys a ticket to one or up to six different ten-minute scripted well-rehearsed monologues being presented live online in English in all of the above mentioned cities – essentially at the same time regardless of time zone.

The patron will either be grouped by the producers with other patrons around the world to view a specific presentation, or, for a slightly more expensive ticket, the single patron can have a one-on-one presentation of the piece. Since the audience member actually can converse with the character on the screen, the one-on-one opportunity obviously provides a more personal experience.

Patrons buy tickets for a particular date of their choosing between May 23 and 30. Then the company assigns the patron a specific ten-minute window for each of the live shows they request to see sometime between 7 p.m. and 9 p,m. Eastern time. Since all of the shows are performed live each of the days, the time frame changes depending on where you live in what they producers hope will be a world-wide audience.

It’s an experiment, but Bravo and PopUp founder Ana Margineanu think this specific time provides is opportune to try out new techniques. “Yeah, it’s a new medium. But you know I think that this is what this time is for,” Bravo said. “It’s like we’re throwing spaghetti against the wall and trying to see what sticks.”

The Miami facet has been written by Juan C. Sanchez, directed by Tamilla Woodard and will be performed by June Raven Romero, all three Miami Motel alumni. Margineanu directed Miami Motel Stories previously and met Bravo when she was working in New York.

The two companies are a bit coy about what to expect as far as themes, although in one, the patron will be on a date with the performer, and another will feature an angel trying to deliver a message to the patron.

The interactive aspect is crucial to specific appeal, Bravo and Margineanu, said.

“The difference between watching a movie on Netflix and participating in one of these experiences is you can press pause on some movie and go to the bathroom or have dinner and nothing changes in the movie regardless of what you’re doing. But this, it’s alive. You are part of it. You are co-creating the experience for yourself,” Margineanu said.

An Internet experience with people trying to connect through a computer screen might sound “cold,” Margineanu said. “But actually there is a sense of intimacy that you don’t have access to otherwise” in part because you are visiting the performer’s personal space and because the actor is performing for you personally, she said.

PopUp Theatrics has been experimenting with different riffs on the theater paradigms for ten years, and this concept since 2013. They originally used Skype to hook up performers, directors and playwrights around the world who might never meet in the same room, but who could exchange their cultures. But for performances, they sold tickets to a single viewing room such as inside the Gershwin Hotel in New York where patrons would come together to watch different performances from different cities. Prompted by COVID-19, PopUp developed this new arrangement to bring the performances into the patrons’ homes.

The company spends considerable time matching up the playwright, director and actor. Then the playwright is given five days to deliver the first draft of a new script and another six days to finish it. A week of rehearsals ensue.

Patrons have various options at different prices from $11 to $40: buying one ticket to an individual city, purchasing three cities at once for a lower price, buying a one-on-one experience or with a group selected by the organizers.

Patrons will benefit coming with an open mind. “Don’t come in with expectations (because this will be unlike) anything that you’ve ever experienced,” Bravo said.

For more information and tickets, go to https://longdistanceaffair.info/