A Gentleman’s Guide To Love And Murder And Laughter 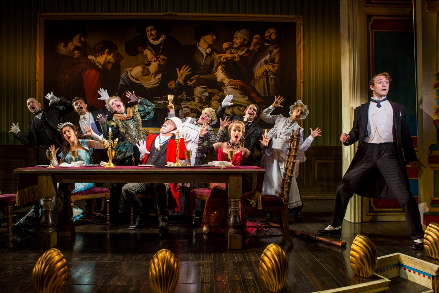 A quiet moment in A Gentleman’s Guide To Love & Murder at the Broward Center from Broadway Across America. Photo credit: Joan Marcus.

We could tell you that A Gentleman’s Guide to Love & Murder is a satire of the artificiality of the class system and an affectionate lampoon of British theater genres such as the music hall and Gilbert & Sullivan operettas.

All of which would be accurate. But, actually, the Tony-winning musical touring at the Broward Center this month is simply deliciously devilish fun. It’s a precisely crafted tale in which ambitious ends seemingly justify the means, even when the means involve blithe homicide.

This NETworks production re-directed by Peggy Hickey is as close as a tour is likely to get for recreating the hilarity of the 2014 Broadway original directed by Darko Tresnjak – including the lush costumes and the quaint jewel box theater with an ornate proscenium.

This musical by people you’ve never heard of (Robert L. Freedman and Steven Lutvak) is a dryly witty spoof of Edwardian/Dickensian plots about likable young men trying to rise from poverty to wealth by dint of pure pluck and intelligence.

In this case, the handsome young man Monty Navarro (played by the callow Blake Price) discovers he is the disavowed bastard son of a wealthy lord D’Ysquith and could inherit his estate – except there are seven relatives with more proximate call on the fortune. So the enterprising young man sets out to murder everyone in his path – with aplomb and style, of course. Price is also inspired by his pursuit of the snobbish, money-worshiping socialite Sibella (Coleen McLaughlin) and the seemingly virginal cousin Phoebe (Erin McIntyre).

It borrows its plot from a 1907 novel that also inspired the 1949 British comedy Kind Hearts and Coronets. In both the film and this show, all of the stumbling blocks are played by the same actor, Alec Guinness on film and here on stage gloriously and profligately portrayed by James Taylor Odom.

Here he has an absolute field day playing a snotty scion, a doddering old lady, a dissolute clergymen, a hapless do-gooder among others. Each has a unique bearing and physical appearance, but all of them share that slightly demented gleam in Odom’s badger beady eyes. He is having a blast with a contagious and joyously scene-munching skill as he and the creative team mercilessly skewer the dissolute, callous and clueless upper class.

It is nearly impossible to relate just how perfectly the creative team lampoons the fantasy of a stiff upper lip, high-buttoned English society being undermined by the conscienceless ambition of someone with no regard for the calcified straitjacket of Britain’s turn-of-the-century social strata. The score echoes the English music hall via Gilbert and Sullivan; the lyrics and script bow to Oscar Wilde.

When our hero pursues the social climber, he asks, “Sibella, has it ever occurred to you to marry for love?” To which she responds, “Don’t be cruel.”

The whole thing is imaginatively stage in a faux toy theater with Edward Gorey overtones with action occurring inside and outside that structure.

A classic scene is a madcap door-slamming trio as Navarro tries to keep his two loves on opposite sides of a connecting hall, each unaware of the other’s presence – Sibella having just had sex with Monty and Phoebe, declaring in the song’s title, “I’ve Decided To Marry You.”

Part of the fun is that no one connected to the show expects the various disguises to fool anyone. But the ability of Odom to switch wigs, moustaches, outfits and personas in a few seconds in both amazing and hilarious at the same time.

The rest of the cast of relatively young non-Equity performers are just as solid from the cheeky Price/Monty to McLaughlin’s bluntly avaricious social climber
Sibella to the gorgeous soprano of McIntyre. True, the originators of the roles, especially Jefferson Mays as the victims and Bryce Pinkham as the murderer, had so magically irreplaceable charisma that that these folks don’t have. But if you didn’t see them on Broadway, you wouldn’t feel let down.

The music is infectious and the patter song lyrics downright brilliant, although there some microphone problems opening night in Broward.
.
All told, it’s delightful schadenfreude to watch the skewering of the one percent of the one percenters who have their position by self-appointed Divine Right.

This entry was posted in Performances, Reviews and tagged A Gentleman’s Guide to Love and Murder, Broadway Across America, Broward Center. Bookmark the permalink.